Review: The ‘Newsies’ anniversary celebration reminded me of why I love NYC

The “Newsies” reunion at 54 Below brought the magic back for a longtime theater fan. 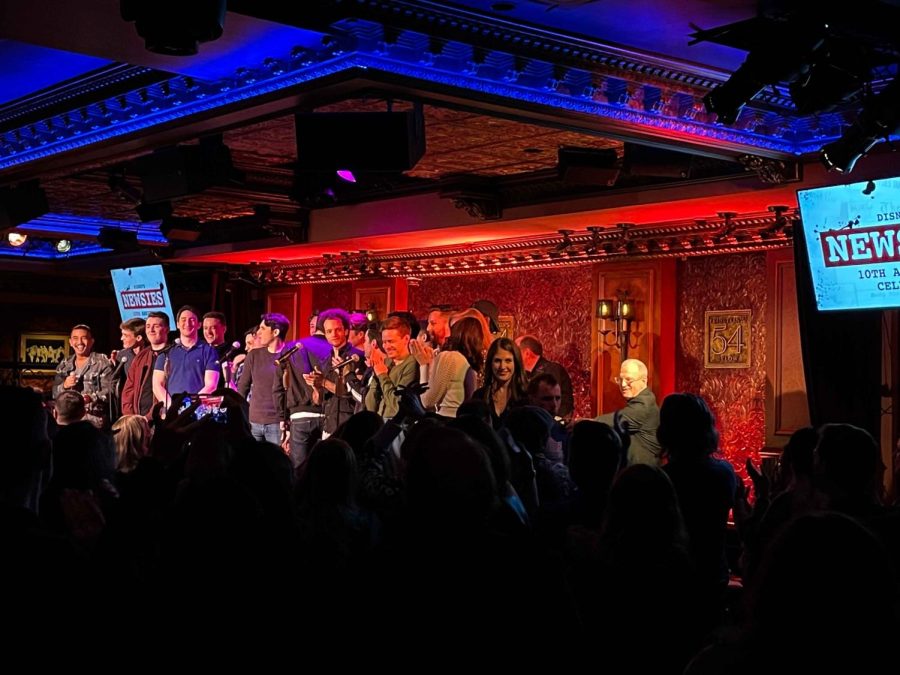 The musical “Newsies” celebrated its 10th anniversary with a concert held at Feinstein’s/54 Below. (Staff Photo by Caitlin Hsu)

Anyone who knew me in 2014 could probably tell you that I was absolutely obsessed with the musical “Newsies.” Even though it’s now been years since I donned a newsboy cap and rocked out to “Seize the Day,” when a friend offered me her ticket to the “Newsies” 10th Anniversary Celebration, I knew I had to go.

To celebrate a decade since “Newsies” opened on Broadway at the Nederlander Theatre, Broadway and tour cast members reunited for four performances spread over two nights at Feinstein’s/54 Below, a cabaret club in Midtown.

On March 28, I entered the legendary cabaret venue for the 9:45 p.m. show. Although it was a late Monday evening, the air was buzzing with energy. A couple of the actors were already wandering through the luxurious dining room, greeting their friends and giving each other good-natured hugs and high-fives. Waves of nostalgia hit me as my brain automatically began to fill in their names. Aaron Albano, who played Finch and was the host of the night. Tommy Bracco, who played boisterous Brooklynite Spot Conlon and liked to exclaim “poifect!” while signing playbills. Adam Kaplan, who understudied for the lead role of Jack Kelly. My excitement only grew as more familiar faces appeared in the room.

At precisely 9:45, the lights dimmed. Actors filled the stage, launching into the punchy opening lines of “Carrying the Banner:” “That’s my cigar! / You’ll steal a-nuddah!” “Newsies” is known for its explosive, high-energy performances, and this show was no exception. I laughed as various vocalists jostled for the microphone and as two Crutchies of different eras sang their lines in unison. Despite the plethora of figures onstage, it was remarkably well-coordinated, with vocalists riffing off of each other and passing through lyrical handoffs effortlessly, even throwing their fists into the air simultaneously.

I’ve seen the musical live twice before. This was a different kind of show — more relaxed, more natural. The actors were performing not as “Newsies” characters but as themselves, singing the numbers they’d rehearsed so many times, but in their own skin. Young and old, new and veteran, Broadway and tour alike — these actors represented different generations of the same story, singing together in harmony.

They all seemed genuinely happy to be there among old friends. Each actor silently cheered each other on from the sidelines and applauded their fellow performers between songs. In one particularly touching moment, I saw the original Broadway cast’s Andrew Keenan-Bolger on his phone recording the “Letter From the Refuge” performance by Andy Richardson, who had taken over the role of Crutchie after him. He stood right behind the chair of the person next to me while doing this — I stared, awestruck to be less than two feet away from an actor I’d once had on my phone’s background.

As the night went on, the performers ran through all of the major numbers from the musical. We even got to see Ben Fankhauser beckoned onstage to sing his famous line, a running joke in the fandom: “Go and look it up / The poor guy’s head is spinning!” When it came to the major dance breaks in “Seize the Day” and “King of New York,” the lights onstage dimmed, and the audience and actors both turned to watch videos of the dance numbers on the two television screens.

I got a kick out of seeing them react to their own old performances, nodding along, laughing and occasionally pointing animatedly to each other. The musical performances were interspersed with video messages from other former actors and crew and the creative team: congratulations from composer Alan Menken and writer Harvey Fierstein, well wishes from former cast members who couldn’t make it and even an adorable clip of former Jack Kelly actor Corey Cott singing with his three young sons. The audience clapped, cheered and fawned over performances and videos alike.

For me, the best part of the night came after the show. On my way out, I ran into none other than Fankhauser himself at the front door. He had still been in the role of David Jacobs in 2014, but had been absent on the particular night that I saw the musical years ago, to my enormous disappointment. I told him how ecstatic I was to finally not only see him perform, but also meet him in person. I excitedly took a picture with him and wished him a good night.

As I headed to the subway, I thought about the 14-year-old girl who had once stood outside the Nederlander Theatre with a playbill and a Sharpie. Her anticipation as actors trickled out of the stage doors into the crowd, the thrill of meeting the people behind a show that meant so much to her. She had gone back to the hotel that night thinking, “New York is truly magical.” As I returned to my NYU dorm, I felt that way once again.