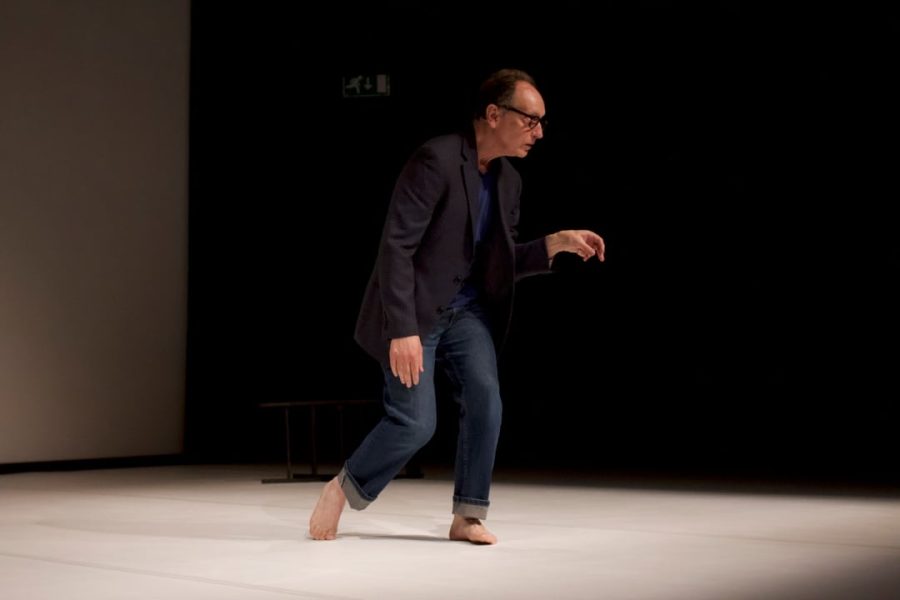 “The Cage Shuffle” is one of actor and avant-garde choreographer Lazar’s most beloved works. In the experimental theater piece, Lazar adapts a series of 90 stories — each exactly one minute — originally written by John Cage for his 1959 piece “Indeterminacy.”

Cage is famous for musical and theatrical pieces with an open, experimental format in which chance is integral to their structure. Riffing on Cage’s signature interplay between structure and chance, Lazar plays his stories in a random order — hence, the shuffle — while performing a seemingly endless stream of choreography composed of everyday movements.

The dance itself was choreographed by Lazar and his wife Annie-B Parson, whose choreographic work stands out in David Byrne’s “American Utopia” on Broadway. The piece is largely composed of simplistic and often pedestrian movements which are untethered to any consistent sense of rhythm. While Cage’s short stories themselves are a charming and often hilarious insight into a lesser-known side of the esoteric artist, the real joy of Lazar’s piece comes from the spontaneous ways in which this particular production can evolve right in front of the viewer.

This latest mounting at La MaMa is particularly notable for featuring all 90 stories performed in one continuous run. In past productions of “Cage Shuffle,” Lazar usually performed shorter sections of the piece. For this full-length version, he collaborated with Parson, as well as guest dancers Jess Barbagallo of Half Straddle and Big Dance Theater and Patricia Hoffbauer, who — along with Lazar — is currently adjunct faculty at NYU. However, Lazar performs the vast majority of the stories alone, breaking into quite a sweat in the process.

What was immediately striking about “Cage Shuffle” was Lazar’s relaxed stage presence. He gave a modest introduction, but it quickly became apparent that this simplicity cloaked a technically stunning performance. What his demeanor hides is the impressive ability to keep track of the 90-minute long continuous dance while speaking text of the stories verbatim. Somehow the performers kept up, all while having the lines fed through earbuds.

The rhythmic clashes between the movements and precise timing of the stories were just as interesting as the humorous moments of serendipitous synchronization. Mistakes were inevitably made, either with the language or the choreography, but Lazar’s disarmingly casual nature made them feel just as much a part of the performance as anything else.

However, the element of spontaneity proved to have some unexpected consequences. Around halfway through the showing of “Cage Shuffle,” Lazar’s phone seemed to have reset the audio and a few of the stories started to repeat. Unfortunately, it became clear that this was not supposed to be occurring, and the performers were visibly unsure where to go next. In the hands of a less skilled group, it might have been catastrophic, but Lazar and company took it in stride.

Lazar was candid with the audience, and the technical difficulty suddenly became an unbelievably funny moment when Lazar pulled out his phone and started picking his favorite stories out of the list. He summed it all up by saying, “You can tell your grandchildren about this one: ‘I was at the most fucked up performance of this … downtown theater.’”

This derailed performance of Lazar’s piece was just as enjoyable as a conventional showing would’ve been. It was an absolute thrill to watch him grapple with the unexpected. At its heart, the performance was really a testament to Lazar’s skill and singular fearlessness as a performer. The fact that he was able to cope with it all makes me doubt that any fan of his left the show disappointed.

At its core, “Cage Shuffle” is a piece about chance conceived as a testament to an artist who pioneered the use of these concepts in the modern American experimental theater. This broken-down performance of “Cage Shuffle” felt like the perfect continuation of that spirit.