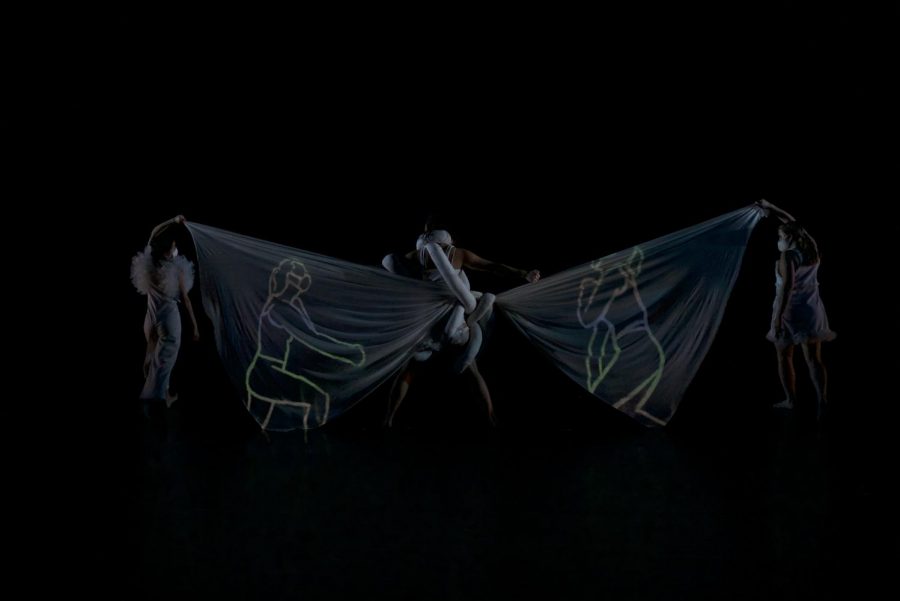 A lone dancer on stage bounces and sways her body rhythmically, wearing a white, breezy costume. Animations are projected onto her as she dances. The moment wouldn’t be out of place in an unconventional fashion runway, but it’s actually the product of a wild mixture of dance and technology choreographed by Tisch junior Garet Wierdsma.

Wierdsma choreographed “On the Becoming of Many Selves” in collaboration with Zoe Wells, Zilu Chen, Sydney Chow and Grace Tong. The performance is a mix of video projections, animations, musical compositions and dance.

“My scene is about change and growth. It’s about your internal self and how that is also who you are externally,” Wierdsma said. “We are all kind of representing this idea of one being, but there’s many different beings within each person.”

“On the Becoming of Many Selves” was one of the six works in Tisch’s Dance Works IV: Dance & Technology concert, an annual dance event choreographed by students. Students submitted their proposals and started to rehearse for the two-hour event last October. The concert  merges the artistry of dance and technology in exquisite ways that are constantly being built upon by students year after year.

The students shoot and edit films, create animations and compose music while  choreographing their dance movements. With the student-made films shown behind the dancers on a massive screen and their original animations projected onto the stage, often consuming the dancers, the performance turns the stage into a visual feast for the audience.

This year, because of COVID-19 restrictions, the performance was livestreamed for audiences who couldn’t attend the in-person performance. Performers were challenged to work with the live-stream camera so that audiences around the world could have a similar experience to that of in-person attendees.

Dance and Technology professor Cari Ann Shim Sham acts as the performance’s advisor and her course, “Filming the Moving Body,” lays a solid foundation for the students’ work.

“We are very lucky to have such a department focused on production and technology as much as it is on dance,” said Owen Burnham, a student choreographer. “I’m using film and animations in my work, but other people are using audio, mixing different projection mapping techniques, different ways of using a live stream camera, so it’s a really open-ended concert.”

Burnham, a Tisch junior with a minor in Business of Entertainment, Media and Technology, is a multifaceted student. In addition to dancing and choreographing, Burnham also takes photos, illustrates animations and directs films. Bringing all of his talents together to create his contribution to Tisch’s Dance Works IV, Burnham realized that this was something he needed to do for the rest of his life.

“I choreographed in the space because I didn’t know if I would be able to have the space to choreograph,” Burnham said. “It was more the technology that I was working with the past five months, and then dance happened the last two months, which is an interesting way to work, I never really worked like that.”

After working on their choreographed dances for five months, the students tend to develop  personal connections to their works.

“A lot of the choreography that I originally had kept getting thrown out, it just wasn’t what I needed or what I envisioned, which is really cool to acknowledge and to have moments of like, okay I’m getting there but it’s not there yet, and it’s okay to start over,” said Keon Hughes, a Tisch sophomore majoring in dance.

Hughes’ work also highlights the idea of struggles and constraint. He hoped to develop a performance that embodied the concept of division and identity through the scientific processes of meiosis and mitosis. For his final performance, “Anonymity,” Hughes dances to “Introspection,” a song composed by his best friend Gabriella, as well as Billie Eilish’s “Not My Responsibility,”creating a deeply emotional performance.

“I was really drawn to the song [“Not My Responsibility”] and the words were speaking. During the song is an intune with the narrative that I’m trying to portray,” Hughes said. “It’s as if I have just given birth to my own piece.”

For Tisch junior Cameron Surh, the use of live audio reactive visuals was the most challenging aspect, even though this is already his third technology and dance collaboration.

“The hardest part about that was making sure we could align choreography and visual and music and create a world out of these things, and making all of that at the same time is never easy,” Surh said.

These artists were not expecting to perform with masks, have their rehearsal time reduced or manage space limitations. Yet, they remained resilient amid the pandemic, finding new ways to connect with audiences by developing methods of harmonizing technology and dance. Despite many hurdles, Tisch Dance Works IV proved a success, showcasing the exemplary work of genuinely versatile artists.

Find more information for upcoming performances by the Tisch Department of Dance, including Tisch Dance Works V, through live stream and in person here.