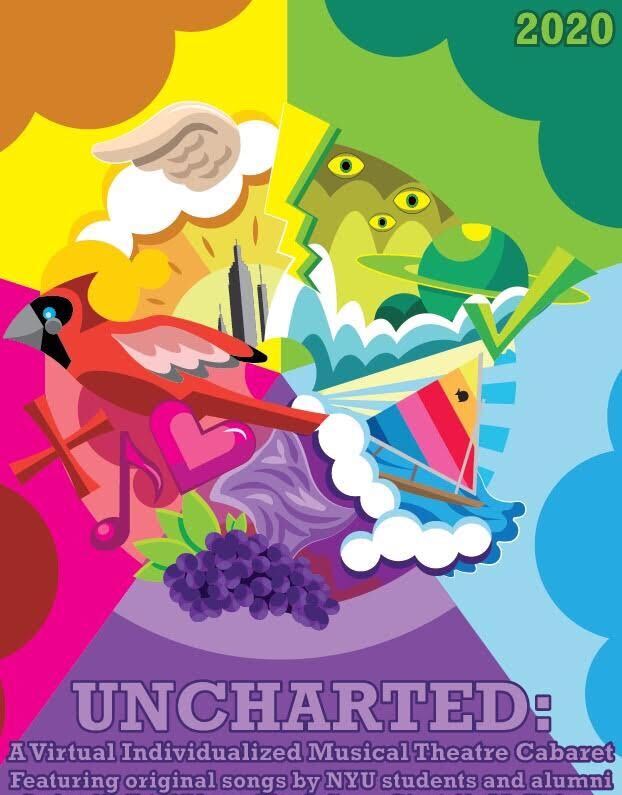 The Gallatin Theatre Troupe will present their new production “Uncharted: A Virtual Musical Theatre Cabaret” over Zoom. The show features original work and the team hopes to bring their art to a larger audience. (Illustration by Josh Finkel)

If there’s one thing that any theater group knows, it’s that the show must go on. Though familiar to most, those words are representative of the determination that Gallatin Theatre Troupe possessed as they transferred their live musical cabaret to an online platform.

This spring, Gallatin Theatre Troupe was preparing for the fifth annual production of “Uncharted: A Individualized Theatre Cabaret.” The cabaret matches vocalists and musicians with pieces written and composed by NYU students and alumni. Beginning in 2012, it initially featured popular musical theater works, but it shifted its focus to original student work in 2016. This new and improved version, based solely on student and alumni work, has been referred to as “Uncharted” ever since.

The show was to be held at the Jerry H. Labowitz Theater in early May, but the team had to alter their plans after receiving the fateful email confirming the closing of campus for the rest of the semester. The bad news was that “Uncharted” would no longer be performed in person, but fortunately the creative team actively worked to keep their production alive.

Called “Uncharted: A Virtual Individualized Musical Theatre Cabaret,” the new experience will be held entirely on Zoom. The team is taking advantage of the app’s webinar feature to make the show as close to the real thing as possible.

“Like any cabaret, a lot of our show relied on the conventions of live performance,” Gallatin senior Kate O’Mara, one of the show’s producers, said. “A live cabaret also fosters a unique and intimate experience with its audience members which doesn’t come naturally over video. Our goal in approaching this virtual cabaret was to replicate this experience as best as possible.”

Despite being in different states, and in some cases different countries, performers and organizers alike have managed to make the necessary changes to guarantee that the performance will be a success. Through the webinar feature, each performer will be a panelist and a host will be in charge of switching between the panelists’ screens.

As a result of shifting to a digital platform, the team has had to make some changes to the responsibilities of everyone involved.

“The adjustment overall has been the biggest hurdle, but luckily we have a really ‘on it’ creative team and all of us are taking over roles that we originally didn’t have and working with everyone to figure it all out” Steinhardt senior Ian Fales said.

Fales originally held the position of stage manager, but in the virtual show he’ll be front and center. He will take on the role of the host, or MC, which had to be added to help the show run smoothly online.

Currently, online rehearsals are also held over Zoom. However, the singers have to sing their songs acapella due to the program’s natural tendency to lag and break up. While these problems would pose a problem for many musicians, Gallatin Theatre Troupe is working to figure out the many difficulties of online rehearsals.

“I’d say the biggest challenge — and the biggest blessing — is figuring out how to get technology to work with us here rather than against us,” said Gallatin senior Lily Hitelman, the show’s director. “It’s hard if not impossible to make musical theater happen alone, and I feel lucky that we have access to technology that enables us to make this happen, but yeah, it definitely requires some extra finagling.”

Zoom is designed to minimize any noise that is not a human voice, making it challenging for the musical accompaniment the singers perform with to be heard. However, the creative team held multiple sound checks to uncover what technology, like a speaker or headphones, would maximize the sound quality for each performer.

Ever the optimists, the team members have not only been able to overcome every obstacle that has come their way, they’ve also found silver linings in this situation. Gallatin first-year Zac Geinzer, a music director, has found that the show still captures all of the emotions that come with musical theater, but in a slightly different way.

“There’s something about being in that room and feeling the air move from instruments and voices that’s been challenging but not insurmountable when it comes to moving the song online,” Geinzer said. “You might not be able to see the faces but it’s not as if you’re alone, in that every performer is going to be playing with a recording of musicians from hundreds and thousands of miles away.”

The creative team believes that Zoom will help them reach a wider audience. According to Fales, the show previously attracted an audience of mostly Gallatin students and family, but that might change this year. They plan to advertise the show’s wider accessibility on social media and expect a wider audience. In addition to a live performance available to everyone, they will also be uploading a few ensemble pieces that didn’t make it into the live version, along with a recording of the entire show, to Youtube.

After some reflection on the part of the team members, they all came to appreciate each other’s hard work and dedication, as well as everything they’ve learned about adapting to new and completely unprecedented circumstances.

“I think that coming through all of this I realized that if we want to make the music happen, it’ll happen, even if it’s over Zoom or anything, art finds a way,” Geinzer said.

The Gallatin Theatre Troupe has stayed resilient amid the ongoing pandemic. Through the hard work of this extremely dedicated group of people, one thing is certain: the show will go on.

“Uncharted: A Virtual individualized Musical Theatre Cabaret” will be live streamed on May 2 at 7 p.m. EST. An RSVP is required to attend the event.