YUNGBLUD’s newest album explores the different phases of the self through expression and rock. 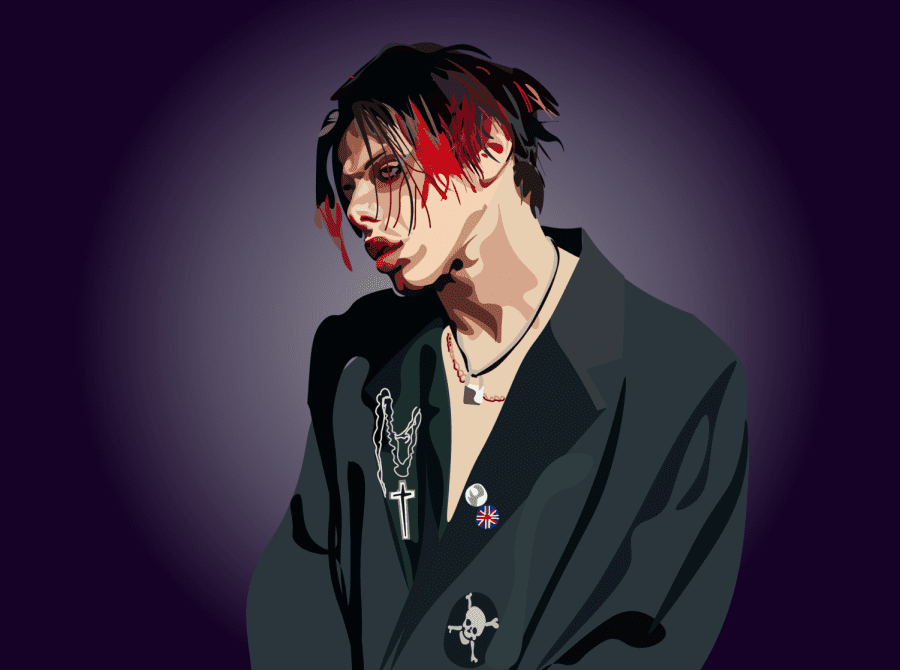 YUNGBLUD is an English singer-songwriter who recently released an eponymous cross-genre album on themes of self-expression. (Illustration by Natalia Palacino)

In his self-titled third album, English rockstar Dominic Harrison, better known as YUNGBLUD, continues to explore themes of individuality and self-expression. The album also encourages a more cohesive narrative than his previous works, emphasizing vulnerability, love and self-reflection. While Harrison’s second album “Weird!” explored identity through over-exaggerated caricatures of himself in order to deeply embody society’s eccentricism and give it a rightful voice, “YUNGBLUD” goes beyond in its genre bending to delicately handle the expression of the self.

Opening the 12-track album with “The Funeral,” Harrison instantly engages listeners with blends of emo rock and punk to embrace the rawness of human insecurities. Featuring gothic undertones, the album’s lead single expresses that life is a mystery. It takes us on different journeys to the same place, so we need to face it head-on with no shame. This track, therefore, sets the tone for the coming-of-age album. The following song, pop-synth “Tissues,” samples “Close To Me” by The Cure, and it translates personal insecurities into a love song. Conversely, “Sweet Heroine” takes a lighter instrumental tone to deal with loneliness and the urge to want someone.

Stepping away from love, “Memories,” a gritty electric rock song featuring Willow, explores contrasting themes. Through this gritty electric rock song, YUNGBLUD and Willow’s lyrics scream “I wish I could just let go / Of all the memories I know.” They represent the angsty tension between the conscious and subconscious. “Mad” further contemplates this tension as YUNGBLUD sings “I don’t think they understand, I know that I’m going mad.” These two tracks solidify the direction of the album — a direction filled with heavy self-reflection, contemplation and thereby, growth.

However, YUNGBLUD doesn’t stop there. He goes further to deal with delicate yet important issues of sexuality, violence and death. Commenting on toxic masculinity, “I Cry 2” uses auto-tune as an instrument to say, “It’s alright mate, I cry too.” Similarly, “Sex Not Violence” finds a powerful message within its classic yet funky synth-pop beats as he addresses current sociopolitical topics.

“Don’t Feel Like Feeling Sad Today” finds a distinct position on the album as a song that blends fun upbeat tunes with a heavy call to action — “Why are we sitting in silence / Wondering how we can beat all the violence?” The cheery tone of the song makes it a perfect rock anthem that balances out more emotional songs on the album like “Don’t Go” and “Die For A Night” while still sending a message of letting go of pessimism and embracing the positive.

“The Boy In The Black Dress” feels like a perfect finale to an album filled with contemplation and introspection. The layers of depth in this indie-feeling track make you feel the closest to the singer’s thoughts and yet, expand beyond a self to poke at societal issues. YUNGBLUD told NME, “This album is about reclaiming my name and humanizing the caricature,” and that’s exactly how it feels listening to “YUNGBLUD.” There is spirited rebelliousness and a deep self-reflection within the album that displays YUNGBLUD’s growth as an artist and as a person, and that makes this his most personal album yet.