Kendrick Lamar’s protege performs for the university where nobody sleeps. 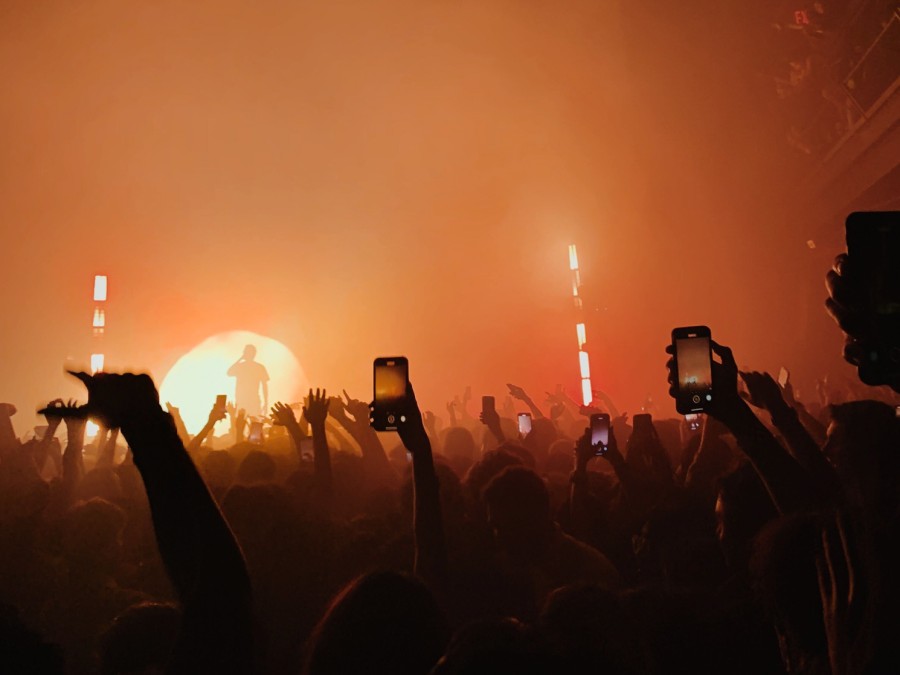 The V100 concert is one of the most anticipated events of NYU’s Spirit Week. This year, it was headlined by Baby Keem. (Staff Photo by Luca Richman)

Violet100 is an annual concert hosted by the NYU Program Board, a student-run organization that co-sponsors events. After a grueling hiatus from live music, V100 is back after two years. 3,000 NYU students were in attendance for the sold-out V100 revival at Terminal 5.

This year’s event was a genre-crossing smorgasbord featuring a major player in modern music, TikTok sensations and performances from up-and-coming student artists. Most attendees came to see Baby Keem, whose 2021 collaboration with Kendrick Lamar, “family ties,” has garnered approximately 250 million streams on Spotify.

“I showed up to the Baby Keem concert an hour before doors and managed to get right behind the barricade,” said Gallatin sophomore Zoe Dal Cerro. “It was fucking epic, one of my favorite concerts I’ve been to, and I was pleasantly surprised NYU managed to pick such perfect performers.”

The Las Vegas rapper got international audiences listening with his 2019 hit “ORANGE SODA,” which many attendees were happy to hear him perform. The rest of the set comprised songs from his Grammy-nominated album “The Melodic Blue.” The album features the song “family ties,” for which he and Lamar won best rap performance at the 2022 Grammys.

“I came for Baby Keem, and I knew the other two from TikTok,” said Shy Brown, a sophomore Tisch drama student. “I wasn’t like a die-hard fan of them, but then I saw the concert tonight and I was like ‘Oh word!’ Ya, they ate, they ate for sure.”

“I thought concerts would never be the same after COVID, but that concert honestly felt like COVID never happened,” said Renee Nicole Powell, a sophomore Tisch drama student. “Nobody was worried about anything other than having fun. Being able to experience live music privately, only with kids who go to your school, gives you a sense of freedom. And for us all to dance and enjoy music together was priceless.”

For younger audiences and V100 first-timers like Powell, this may have been the first large-scale live music event they’ve been able to attend as a part of the university community.

Older audiences can remember when V100 was all the rage, consistently booking whoever was big in the rap game at the time. Headliners of years past include names like Chief Keef, Gunna and Pop Smoke.

“We honestly really took a hit because, well, COVID,” said Program Board co-chair Taylor Malone, a Steinhardt junior who assisted in booking this year’s performances and organizing the program. “Because the school is so strict, this is the first live concert we’ve done since February 2020. Even our fall show, we had to do virtually even though live shows were popping up all over the city.”

Malone explained how the lull in their ability to host live music events culminated in the lumping together of New Music and Concerts — two different Program Board committees — and their subsequent saved-up budgets, which allowed them to shoot for the moon this year when it came time to book an act.

“We were told that we could do V100 [in person] like a month ago,” Malone said. “We were planning for a virtual show until about mid-March when our faculty adviser was like, ‘Hey, the show’s happening!’”

The exciting news came at a crucial moment in the city’s live music scene. Ahead of the festival season, we’re finally starting to see the biggest names in music appear in lineups and announce tour dates. Baby Keem’s performance came two days after the second weekend of Coachella, where the rapper also performed.

“We kept running into problems in securing a headliner,” Malone said. “We really wanted Yeat. He seemed like the perfect headliner for the moment. But we got Lonely and Ken and couldn’t have had all three; that would have been drawing too much from the same underground niche. It was cool to see that resonate with so many people at the show.”

The Program Board made a careful point in their curation of the artists and repertoire to make this night more than a celebration of one of the biggest names in music but also a showcase of the talent at the Clive Davis Institute of Recorded Music.

“I think it was just… fun,” Taylor said. “Real fun. And that was the goal, I just wanted everyone to have fun.”