The British artist adopts a trap aesthetic on her playful new mixtape. 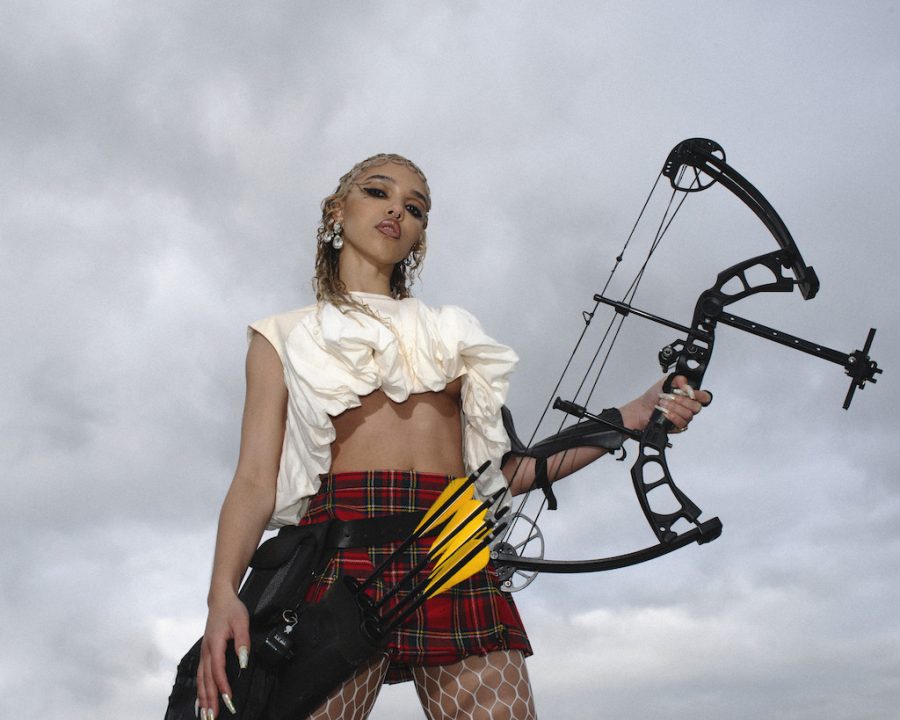 FKA twigs’ latest release, “CAPRISONGS,” is phoenix-like — on the 17-track mixtape, the British artist-dancer-wushu-sword-fighter is reborn. Strong, sexy, confident and commanding, with “CAPRISONGS,” FKA twigs marks a shift from her previous album “MAGDALENE.”

Writing after a breakup with everyone’s favorite vampire, Robert Pattinson, as well as fibroid-removal surgery, FKA twigs was broken and vulnerable on “MAGDALENE” — but she was beginning to heal. You can hear this in her quivering soprano, most striking on songs like “cellophane,” the lead single from the album. “And I just want to feel you’re there/And I don’t want to have to share our love/I try, but I get overwhelmed/When you’re gone, I have no one to tell,” she sang over sparse, unhurried piano. The album was a work of art — it was ethereal, almost inaccessible through its carefully crafted songwriting, production and vocal performance.

On “CAPRISONGS,” FKA twigs spins 180 degrees, as if she wants to give listeners whiplash. The mixtape’s first track, “ride the dragon” sets the tone. “Hey, I made you a mixtape,” she whispers during its slow, quiet intro, before a trap beat comes in, laden with gritty bass and 16th-note hi-hats.

The mixtape mainly features R&B and trap songwriting and production, except for dancehall track “papi bones” and closer “thank you song,” which harkens back to FKA twigs’ earlier music in its introspective lyrics and vocal performance. Her shift in approach mostly works throughout “CAPRISONGS,” though some of the songwriting lacks structure, leading to a few directionless songs where you desperately wish you could take over the steering wheel.

But where there are songwriting pitfalls, the production more than makes up for it. FKA twigs executive produced the album with El Guincho, and the pair are wildly inventive in their use of (often vocal) samples, offering a sonic palette that sounds fresh to even the most avant-garde music listener. Her voice takes on new shapes here too, adapting to the mixtape’s hyperpop-R&B-trap genres — at times her performances feel like Charli XCX’s — but FKA twigs’ familiar, delicate soprano makes the occasional return.

I don’t mind that this version of FKA twigs is less recognizable to her fans — this mixtape wasn’t made for us. “CAPRISONGS” is FKA twigs’ own stomping ground, a space where she can reclaim herself and feel liberated. It’s a place for her to experiment, to write and sing whatever she wants. This is obvious through the spoken-word snippets she peppers within and between songs, even if their effect is hit or miss — the intro of “oh my love” is amusing; the whole of “christi interlude” I could do without. But overall, “CAPRISONGS” is buoyant, the most I-don’t-give-a-fuck I’ve ever heard FKA twigs.

This makes for some quirky songwriting, like when Pa Salieu joins her on “honda.” Over eerie, choir-like harmonies, FKA twigs raps, “Baby, we can roll it on the M way/Smoke it, Honda, roll it, baby,” delivering each line in a broken-up two-syllable rhythm. As evidenced by its slang — M way is British slang for motorway —  “CAPRISONGS” is also a tribute to twigs’ Britain. In “darjeeling,” which features British R&B superstar Jorja Smith, FKA twigs guides listeners through London and her life story, even if the less-than-cohesive songwriting confuses at times. “Started out a country girl, wildly haired and gappy grin/Had to change a couple schools ‘cause I wasn’t fittin’ in,” she sings over fast, glitchy production.

“darjeeling” isn’t the only star-studded collaboration on “CAPRISONGS” — the mixtape’s hyperpop-influenced single, “tears in the club,” features The Weeknd. Released on Dec. 16, the single left fans in rapt anticipation — indeed, it’s some of the mixtape’s finest songwriting. “Tears in the club/’Cause your love’s got me fucked up,” she sings before explaining, “I wanna get you out of/My hips, my thighs, my hair, my eyes, my late-night cries.” The Weeknd’s verse blends seamlessly with hers, and with every melody being a hook, FKA twigs gives you no choice but to go to the club and shed your very own tears.

More than ever a shapeshifter, FKA twigs is many things on “CAPRISONGS,” but she is most undeniably a badass. Though the mixtape’s production excels in its use of sampling, distortion, vocal manipulation and layering, it wouldn’t be half as good without twigs’ most powerful instrument — her vocals. As usual, she subverts expectations through her vocal performance and processing, twisting her voice into new textures and timbres to form a delightfully idiosyncratic sound.

Her first release with Atlantic Records, “CAPRISONGS” is not the FKA twigs you would have predicted. And though it’s not perfect, the mixtape is a refreshing and innovative collection of songs. Spanning several genres, moods, aesthetics and collaborators, “CAPRISONGS” reveals the inner workings of an exceptionally talented artist.