Review: Will Wood’s live show was as delightfully unhinged as expected

The avant-garde pop musician sold out two energy-filled shows at The Bitter End this past weekend. 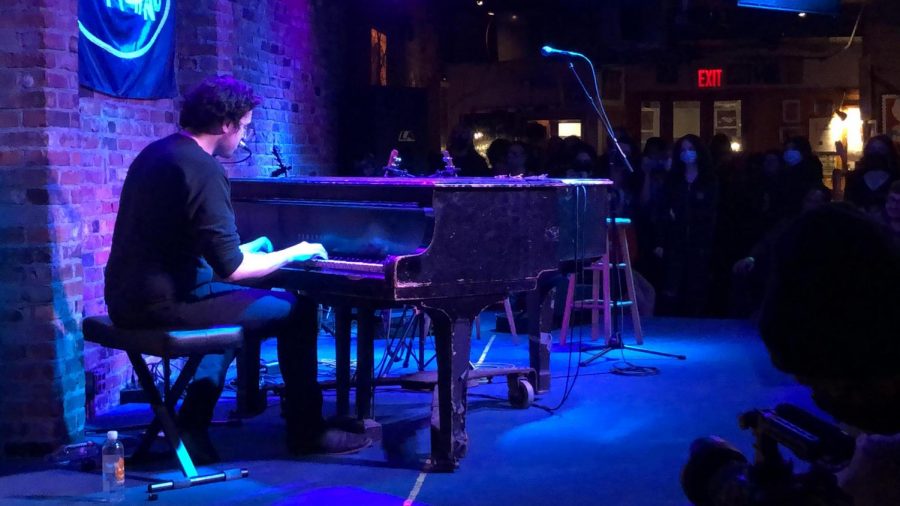 Musician Will Wood performs at The Bitter End, a rock club on Bleecker Street. Wood’s concert consisted of him singing his popular genre-defying songs while alternating between the piano and ukulele. (Staff Photo by Caitlin Hsu)

I’ve always believed that Will Wood makes music for reformed emo kids, and nothing has strengthened this conviction more than the crowd outside The Bitter End on the evening of Sunday, Nov. 28. Decked out in our finest black and white pinstripes, skeleton memorabilia and floral print Dr. Martens, there was little doubt as to what kind of artist we had come to see.

Because Wood’s audience is so niche and The Bitter End is so small, I wasn’t surprised by the concert’s intimacy. Still, I was starstruck when —  during folk-rock guitarist Matt Pless’ opening act — I turned around and found Wood leaning against a wall less than 10 feet away from me. The merch table was run by Wood’s brother Graham, whom I recognized from TikTok. I bought a T-shirt and thanked him by name. He seemed pleasantly surprised.

Around 5:50 p.m., Wood went onstage. He wore a simple long-sleeved black shirt and black jeans. No face paint, no high heels, no Tapeworms — the latter being the band that sometimes accompanies him. Just a man, a piano, two ukuleles and a setlist scrawled in pen on his left arm. Wood has talked about reinventing himself as an artist — it’s one of the driving motivations behind his forthcoming album, “In Case I Make It” — and I think this newfound simplicity is a part of that. However, his show was anything but oatmeal-plain.

Wood’s genre spans the gamut from rock to folk to Klezmer to vaudeville. He’s a talented pianist and vocalist. My appreciation for his versatility somehow increased after seeing him live. He opened with the solemn piano-ballad single “Sex, Drugs, Rock ‘n’ Roll,” then pulled a total 180-degree turn, launching into the upbeat and lyrically fast-paced “2econd-2ight-2eer (that was fun, goodbye.).” I’ll admit this song has never been my favorite, but the jazzy, syncopated piano rendition really did it for me. From the instrumental bridge of this number, he executed an absolutely flawless transition into the dark cabaret-esque “BlackBoxWarrior – OKULTRA,” eliciting quite a few screams from the audience. I’m still kicking myself for not recording it.

After these three stellar performances, he took a pause to address the audience, perched in front of the microphone like a stand-up comedian. Staying true to the oddity of his character, he immediately started to poke holes in his own façade — calling himself out for narcissism, pointing out the unequal relationship between performers and audience, and declaring that the fourth wall was “all the way back there” while gesturing at the very back wall of the room. He then consulted the setlist scrawled on his arm — apparently we were already getting off track — before picking up a ukulele and introducing the next song, the iconic “I / Me / Myself.”

The rest of the show continued similarly, with Wood alternating between piano and ukulele, singing and monologuing, sharing anecdotes and one-off jokes. As the night went on, there was a notable shift in mood from the high-energy fervor of the introductory numbers to something more calm and profound. He dove into the personal stories behind many of his songs: “Love, Me Normally” was written after a self-sabotaging relationship, “Marsha, Thankk You for the Dialectics, but I Need You to Leave” reflects his fears that the medication for his bipolar disorder had negatively affected his creativity. At different times, he compared us to both a group therapy session and an Alcoholics Anonymous meeting.

For me, the night was a euphoric whirlwind. I couldn’t be happier that the first artist I saw in concert since the pandemic began was the man who redefined my taste in music and became my favorite artist over quarantine. I heard almost all of my favorite songs from “The Normal Album” as well as three unreleased songs. Wood also performed an old crowd favorite, “Skeleton Appreciation Day in Vestal, NY (Bones),” and a surprise encore performance of the rage rock number “Thermodynamic Lawyer, Esq, G.F.D.” Turns out, screaming along to the lyrics “go fucking die!” with a room full of strangers is extremely cathartic.

Even without his signature over-the-top getup, Will Wood’s eccentricity, eclecticism and artistic genius are undeniable. His show exceeded all my expectations, and gave me a high that I’ll be riding for days to come.