The San Diego natives kicked off their tour at the Lower East Side’s Mercury Lounge. 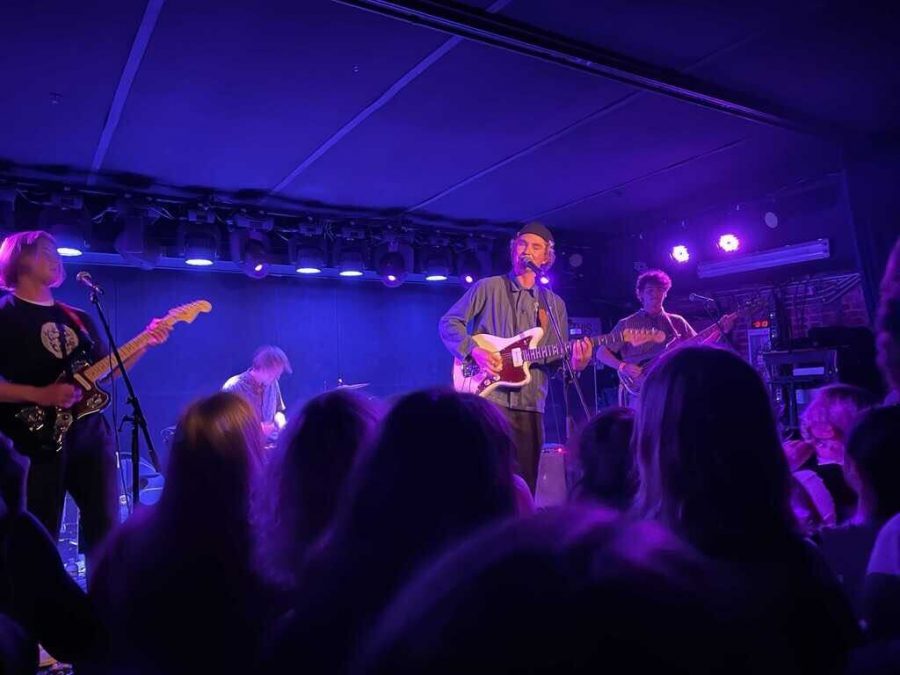 Sun Room takes the stage at the Mercury Lounge on the Lower East Side. Hailing from San Diego, the young band has already amassed a sizable Spotify following. (Staff Photo by Yas Akdag)

Thursday nights are the new Friday nights. It certainly seemed so on Sept. 16, when I went to watch an up-and-coming surf-rock band called Sun Room. Out of breath after speed-walking from class, I entered Mercury Lounge with zero expectations, having decided to attend the show last-minute and being unfamiliar with the band.

Jostling my way through clusters of 20-somethings desperately shouting their drink orders across the bar, I made it to the stage. Just before 8 p.m., Sun Room’s fans started migrating from the bar and filling up the room, though some of the more dedicated fans had been lined up in front of the stage for a while. They formed a defensive wall, ensuring that nobody could stop them from experiencing a front-row view of Sun Room.

The band started playing 10 minutes late. I took this opportunity to people-watch, one of my favorite pastimes. The crowd was composed of young people, mainly college students. There were several interactions where mutual friends met mutual friends, recalling awkward introductions at past parties.

I soon stopped eavesdropping as the lights hanging above the stage began to twinkle one by one, inching left and right, up and down, in Wall-E-like movements. Sun Room hopped onstage, energized and raring to perform. The drummer, Gibby Anderson, settled into his spot at the back as guitarist Ashton Minnich and bassist Max Pinamonti plugged in their instruments. Then Luke Asgian — lead singer, rhythm guitarist and the band’s founder — appeared.

The band is charming, but it was immediately clear that Asgian had the most charisma (though one audience member loudly proclaimed their love for Minnich). The lead singer introduced the band, sharing that it was the group’s first time in New York. They hail from San Diego, California, which reflects their surf-rock sound and aesthetic — their music videos often involve the group hitting the beach and picking up surfboards to catch some waves.

After performing their first song, Asgian claimed that the band loved New York — apparently they had spent the whole day sightseeing — which Sun Room proved to us by ripping off their shirts, revealing tight-fitting white T-shirts underneath with the ubiquitous slogan “I Love NY” printed across in black and red. They injected both themselves and the crowd with an enthusiasm that held steady throughout the concert. It was as if their first song was a warmup and now the band was actually ready to perform. Oh, the power of an I Love NY shirt.

The show felt like a garage jam session in the best way possible. Each band member was an individually talented instrumentalist, displaying a technical and artistic proficiency one might not expect from such a new, young band — Sun Room was formed in 2020 and the members are between 18 and 22 years old. In one year, they’ve already amassed over 270,000 monthly listeners on Spotify.

The crowd wasn’t necessarily singing along to the music; even so, they enjoyed the band’s energy, adjusting their dancing to the tempo and mood of each song. Sun Room sounds like a modern version of The Beach Boys, employing tight, lollipop-sweet vocal harmonies reminiscent of the ’60s band. These harmonies can be heard on many of Sun Room’s songs — while performing “Fun,” Asgian encouraged us to join in, advertising the song as mostly being made up of “oohs.” (It was.)

Fun — the adjective, not the song — epitomizes Sun Room well. They are carefree, summer-loving, sun-bathing, wave-catching, skateboard-riding. They give off the impression that, whatever you do with them, you’ll have a great time. Throughout the concert, this sentiment rang true. Since they only have nine songs out, the band performed their whole discography with an excitement that translated to the audience. Singles “Just Yesterday,” “Crashed My Bike” and “Sol Del Sur” — the latter reaching over 2 million streams on Spotify — were particularly engaging, propelling the audience to scream, shake their heads and dance wildly. I wasn’t familiar with the band before the show, but by the end of it, I felt like a proud mother who’d just watched their kids smash a performance.

Even when accidents occurred, like when Asgian’s guitar string broke mid-song, the band remained unfazed and laid-back. While Asgian procured another guitar, Minnich and Anderson jammed together, alternating between animated guitar and drum solos. Pinamonti watched on, visibly amused, as he supported on the bass. This impromptu jam session was such a pleasurable experience that I was almost disappointed to find Asgian back onstage so soon, toting a fresh, fully-stringed guitar. Then, like absolute professionals, the show went on.

The audience was so enamored by Sun Room that when the band performed their last song, “Sol Del Sur,” the sound of “One more! One more! One more!” reverberated off the walls of the room. Asgian pondered for a moment before confirming they’d have one more song for us — the audience seemed to sigh in relief. Sun Room’s final song was so fast-paced and dynamic that some sort of attempt at a mosh pit (a rather docile one) formed, with fans launching themselves into the fray.

Sun Room was delightful. They were attractive, humble and sweet. They seemed genuinely appreciative of their audience.

On their way offstage, Asgian told fans they’d be hanging out at the merch stand and to talk to them there. Some fans had other plans, though. Making my way out of Mercury Lounge, I heard one concertgoer ask their friend, “Which one [band-member] do you want to take home?”

As I grabbed a slice of pizza post-show, I wondered who was lucky enough to be picked.

A version of this article appeared in the Monday, September 27, 2021, e-print edition. Contact Yas Akdag at [email protected]