Lorde subverts all expectations on her introspective third album. 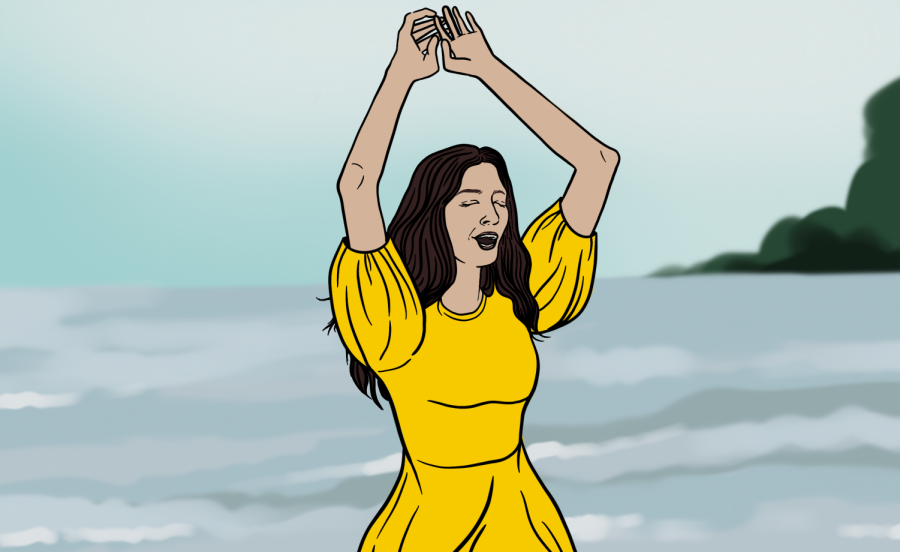 Singer-songwriter Lorde released her latest album Solar Power on June 10. The album, her first in four years, reflects her progression into a new phase of her artistic journey. (Staff Illustration by Susan Behrends Valenzuela)

When Lorde first teased her new album, “Solar Power,” my initial reaction was “oh no.”

Anyone who listened to her last album “Melodrama” close to a breakup can likely relate: the project is earth-shattering and gut-wrenching. “Writer in the Dark,” “Hard Feelings” and “Supercut” are songs that fundamentally changed my understanding of love and heartbreak. The thought of another “Melodrama”  — an album containing the same level of emotional evocation — was both frightening and exciting.

Born Ella Yelich-O’Connor, Lorde released the album’s first single, “Solar Power,” on June 11. With it, the prospect of the album being a Melodrama 2.0 went out the window. The song is a light and zany musing on the flirtatious air of the summer months, with cultic imagery and a music video reminiscent of “Midsommar,” a horror film about a Swedish cult. As Ella runs around the beach, accompanied by dancers wearing neutral clothing, the scene resembles the May Queen dance in “Midsommar.” “Solar Power” contrasts the devastating track “Green Light” — the first single from “Melodrama.” In an interview with Zane Lowe from Apple Music 1, formerly known as Beats 1, Lorde described “Green Light” as a musical representation of the “drunk girl at the party dancing around crying about her ex.”

The second single of “Solar Power,” “Stoned at the Nail Salon,” came out just over a month after the title track, and it completely debunked any predictions I had made about the album being breezy and carefree. With “Solar Power,” we got an upbeat single about the beauty of summer at the beach, but with “Stoned at the Nail Salon,” we got an affecting folk song about getting older, choosing the right path and feeling confident in the life you’re building for yourself. Ella is not shying away from more serious topics after all.

Then, the final single “Mood Ring” dropped on August 18th,  three days before the full album release. A searing satire on wellness culture and pseudo-spirituality, it further concealed Ella’s agenda for “Solar Power.”

So what is “Solar Power”? Is it a reflection of Ella’s experiences gallivanting in nature? Is it an introspective folk album? Is it a distillation of what it means to connect spiritually?

Turns out, it is all of those things and more. Album opener “The Path” directs listeners to the sun for healing and growth. “California” is a rebuke of the glitz and glam of celebrity life. “The Man With the Axe” is a vulnerable poem about the simple side of being in love. “But there, by the fire, you offered your hand,” she sings in this song, “And as I took it, I loved you, the boy with the plan.” Each song on the album, in its own unique way, says the same message: return to nature. Embrace simplicity. Be present. The answers to all your questions await you.

But “Solar Power” is also about the familiar turning unfamiliar. The most exciting thing Lorde did in the four years since “Melodrama” was nothing — she essentially went on hiatus, refraining from putting out music or performing in public. That close examination of mundanity is what makes “Solar Power” so compelling. Take “Stoned at the Nail Salon.” Ella begins with the seemingly banal phrase: “Got a wishbone drying on the windowsill in my kitchen,” but then follows it with, “Just in case I wake up and realize I’ve chosen wrong.” In doing so, she puts the mundane under a microscopic lens, making the familiar become foreign and then it becomes beautiful.

Ella did not write “Solar Power” to cater to her fans, capitalism or bogus music award ceremonies. She did not write it to fit a certain theme or genre — she wrote it as an earnest and meditative reflection on her four years since “Melodrama.” As she stated in her newsletter announcing the album, “Solar Power” is a “celebration of the natural world, an attempt to immortalize the deep and transcendent feelings I experience when I’m on the outside.”

Lorde’s previous two albums — “Pure Heroine” and “Melodrama” — still have a grip on the music industry and pop culture. Young up-and-coming artists continue to explore heartbreak and the tragic romance ballad, a genre of which Lorde is a master. But Lorde has grown out of the music she loved at 16, and odds are, you might too.

The extent to Ella’s growth becomes explicit in the stellar “Oceanic Feeling,” which tops off the album. In the refrain, she sings: “Now the cherry-black lipstick’s gathering dust in a drawer / I don’t need her anymore / Cause I got this power.” The items that used to make Ella happy do not anymore. Ella has gotten older, and she has changed. As listeners, we should not expect her to revert.

“Solar Power” might not have been what we anticipated, but that is the point. Beginning in her 2013 breakout single, “Royals,” Lorde continues to rail against our hyper-capitalist society in songs like “Leader of a New Regime.” She is opting not to produce any CDs of the album for environmental reasons. This album is about Ella; it is her journey away from her pop-star persona and into a mature and defiant artist. The songs are self-aware and subdued and the writing intensely vulnerable. The guitar-heavy instrumentals are the perfect backdrop to her meditations.

“Solar Power” is more than Lorde’s album — it is Ella’s album. You’re welcome to come along for the ride.

A version of this article appears in the Monday, August 30, 2021, e-print edition. Contact Michael Campanella at [email protected]