Dua Lipa conjures newness by incorporating history with her latest album. “Future Nostalgia” is unafraid to dance and begs its listeners to embody its rhythms. 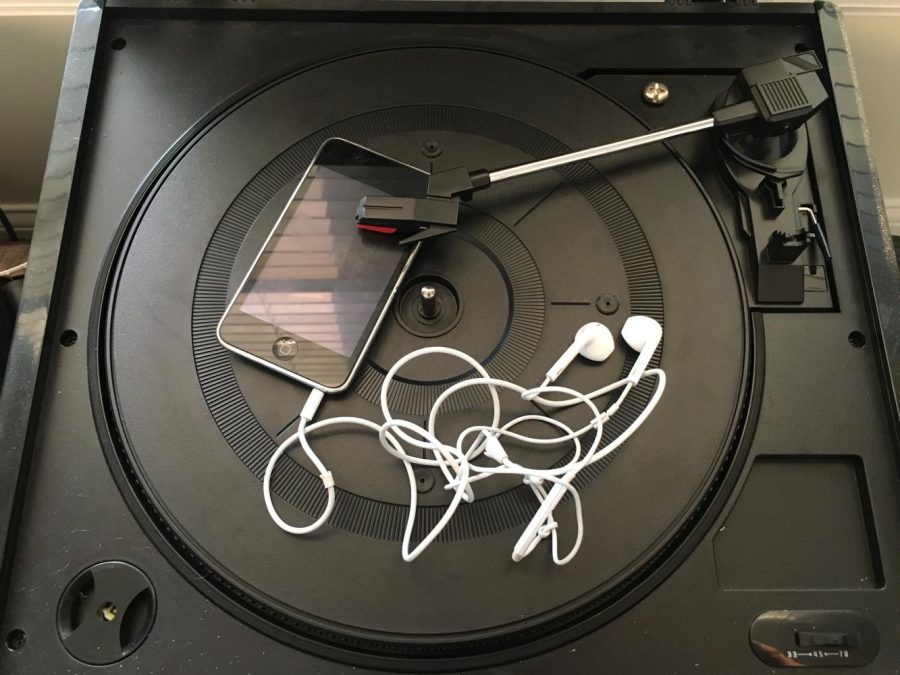 Dua Lipa released her second studio album "Future Nostalgia" in the last few days of March. With its dance music power, each song takes you out of your mind, out of whatever bleak interiority exists in that moment, and into a higher plane of existence, especially amid this grim reality we are living in. (Staff Photo by Fareid El Gafy)

It’s day 17 of quarantine. My family and I are lethargically slumped in our rooms over our respective technological devices. We’re all in our pajamas, despite the fact that it’s 3 p.m. I crawl from my bed into the living room and cue Dua Lipa’s new album, “Future Nostalgia.” Each family member begins to emerge from their rooms into the space with, to my amazement, a glimmer of energy: shoulders bouncing, toes heels clacking together. This is the power of dance music, especially at times like these. It takes you out of your mind, out of whatever bleak interiority exists in that moment, and into a higher plane of existence. Up here, it is bright, booming and carefree. “Future Nostalgia” is escapism at its purest.

It’s impossible to accurately and appropriately discuss “Future Nostalgia” without placing it in the context of March 2020’s grim reality. In a time when artists of many mediums have changed up the timing or method of release, Lipa was among those pushing forward, releasing her album a week early. Lipa has made the most of Instagram livestreams, calls into radio stations and a clever video-chat performance.

I’m sure this wasn’t the rollout Lipa intended. I’m imagining gay clubs across the globe drenched in confetti in the wee hours of the morning, speakers blown out after a third encore of 80’s workout banger “Physical.” But “Future Nostalgia” is now a different kind of pop atom bomb, bursting into the earbuds of a world on lockdown, hungry for reverie and full-body catharsis.

And what a pop atom bomb it is. “Future Nostalgia” is — no pun intended — a physical album. Intricacies in the production trigger visceral, somatic responses. The surprise pop of a bubble in the chorus of “Good In Bed” pierces the ears. Fleeting squeaks, gasps and sighs laced throughout “Cool” seem to suck the air out of the room. Most intensely, “Pretty Please,” an exercise in audible foreplay, eventually erupts into a beautiful mess of chopped vocal samples, pulsing synths and a cowbell that makes an appearance more than once on this dance album. Such a pleasantly feverish experience is made possible by producer Ian Kirkpatrick, whose magical touch can be found all over lead single “Don’t Start Now.”

A simple but highly effective concoction of sticky Nile Rodgers-esque basslines and triumphant violin flourishes bring truth to the album title’s second word: Nostalgia. On top of this are Lipa’s vocals, which are more alive than ever before. Though in her debut project, Lipa’s husky tone seemed to fade into the album’s generic, forgettable beats, “Future Nostalgia” presents her vocals in full command. “You know you can get whatever you want from me / Whenever you want it, baby,” she almost growls on the pre-chorus of “Break My Heart,” a song that samples the melody of INXS’ “Need You Tonight.”

It is maybe this climatic moment — in an album full of many — when one must finally come to terms with the simple fact that Dua Lipa is no longer the girl with that one hit the radio played to death, no longer a subject of memes and name flubs, but a fully-formed star. Not only that, but a star who understands that much of what we need in the future can be found in the past’s propensity to seek sonic brightness.

Heart-thumping “Hallucinate” features production credit from Stuart Price, who shaped the sound of Madonna’s 2005 disco-inspired album “Confessions On A Dance Floor.” The track captures the same electric energy Madonna ignited back then; here, we see Lipa unafraid to make obvious references and breathe new life into what has previously worked so well. This occurs similarly on “Levitating,” which finds Lipa incorporating Daft Punk-esque vocoder riffs into the choruses. While the album loses some of its steam in the final two tracks — namely “Boys Will Be Boys,” whose lyrics feel a bit too on-the-nose and Pinterest-board-y — altogether, it is a project that carries a soul that mainstream pop music hasn’t seen in a long time.

While much of the charts have been painted with ennui post-“Born To Die” influence, for the past five years or so, artists like Carly Rae Jepsen and Robyn have received critical acclaim and a cult-like following for their take on 70s, 80s and 90s revival. Dua Lipa, who has currently captured the mainstream’s full attention, might just be the one to take us into this next battle – not slouched and cynical, but dancing with ferocity.