The Weeknd Makes Social Distancing Easy With ‘After Hours’

The Weeknd’s new album is the perfect soundtrack for the apocalypse. 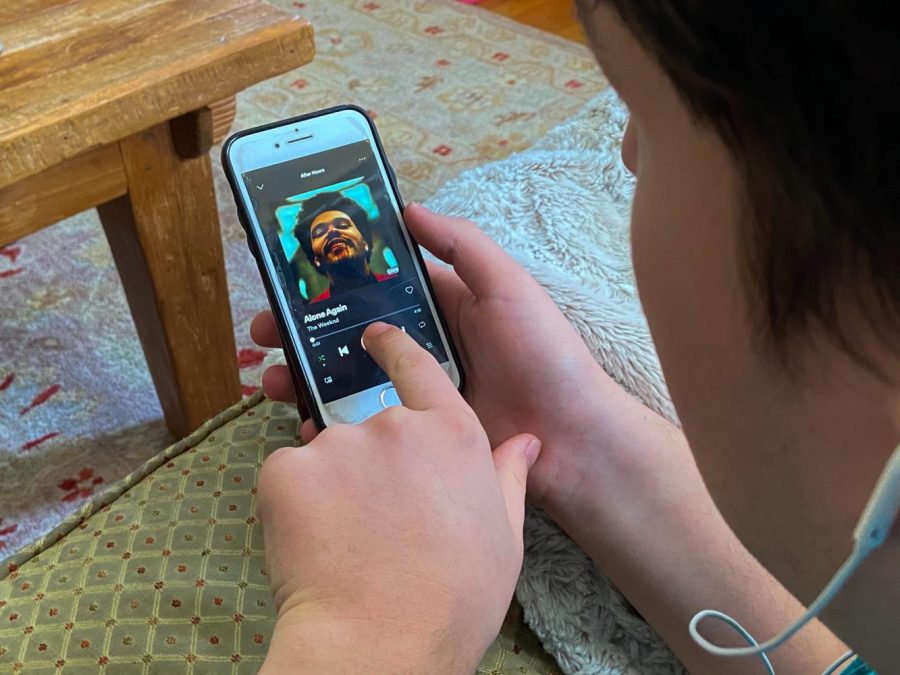 “After Hours,” The Weeknd’s fifth studio album, was released on March 20th last week. Striking the balance between mournful and funky, the album is perfect for your social distancing period. (Staff Photo by Leo Sheingate)

With the world all but falling apart around us, The Weeknd’s gut-wrenching, evocative new album couldn’t have come at a better time. The Weeknd — also known as Abel Tesfaye — dropped his fifth studio album “After Hours” last Friday at midnight, offering 14 tracks blessed with his signature angelic voice and harrowing lyricism to tune out the rest of the world.

“Baby, won’t you remind me who I am, and break my little cold heart?” Tesfaye’s falsetto croons in the first song “Alone Again,” the atmospheric beats reminiscent of “Kiss Land’s” soundscape. Thunderous drums kick in halfway through the track, courtesy of Tesfaye’s frequent collaborator Illangelo, perhaps signifying Tesfaye’s hardening emotional state. The searing bass bleeds into the subsequent “Too Late,” where The Weeknd concedes to his lover that their relationship can’t be salvaged.

“Hardest To Love” marks the album’s sole low point, whose tear-jerking lyrics are overshadowed by dizzying synthetic drums that leave an otherwise beautiful song feeling disjointed. Fortunately, “Scared to Live” acts as a palate cleanser. “If I held you back, at least I held you close,” Tesfaye sings on the glittering ballad, which samples Elton John’s “Your Song.” He takes responsibility for his relationship’s downfall and hopes his ex can find love again — words we all wish we could hear from our exes — and touches on similar sentiments in his 2015 song “Angel.”

The autobiographical “Snowchild” — the title a likely reference to Tesfaye’s cocaine use — takes the album into a darker, more melancholic tone. He muses about his path to stardom over minimalist production, referencing a line from his 2011 song “The Morning,” where he once dreamt of making it to California but is now disillusioned. This appropriately leads into “Escape From LA,” brimming with boastful lyrics and plenty of thinly veiled references to his ex, Bella Hadid, including an NSFW peek into the song’s creation.

The album’s tempo is kicked up a notch with “Heartless,” which was dropped in November 2019, and the hedonistic “Faith” offers expertly-layered bass and equally hard-hitting lyrics. “Thought I’d be a better man but I lied to me and to you,” he laments, and tells his lover that if he overdoses, he wants her beside him, eerily similar to his feature in Travis Scott’s “WAKE UP.”

The Weeknd incorporates some radio-friendly jams without compromising his characteristic moodiness with “Save Your Tears” and “In Your Eyes,” which features a delightfully unexpected saxophone riff. Both tracks explore themes of an introspective Tesfaye acknowledging the pain he’s caused his partner, the tracks’ themes contrasted by their 80s-inspired dance-friendly synth beats.

One particularly heart-rending song is the album’s interlude, “Repeat After Me,” where Tesfaye tries to convince his ex-lover that she still loves him and hasn’t fallen for her new partner. His use of repetition is incredibly impactful; we can feel how desperate he is to persuade his ex-lover, and perhaps himself, that her intimacy with another man means nothing.

With “After Hours,” The Weeknd has finally struck the balance between the mournful, drug-addled R&B of his earlier projects, “Trilogy” and “Kiss Land,” and the funky, experimental pop of “Beauty Behind the Madness” and “Starboy.” The titular track, “After Hours,” embodies this perfectly, breathing life into his reflections on heartbreak with stunning sound production. Tesfaye has managed to channel his self-loathing and hedonistic tendencies into a comprehensive album, without sacrificing his artistic integrity.

A version of this article appeared in the Monday, Mar. 23, 2020 print edition. Email Lauren Gruber at [email protected]