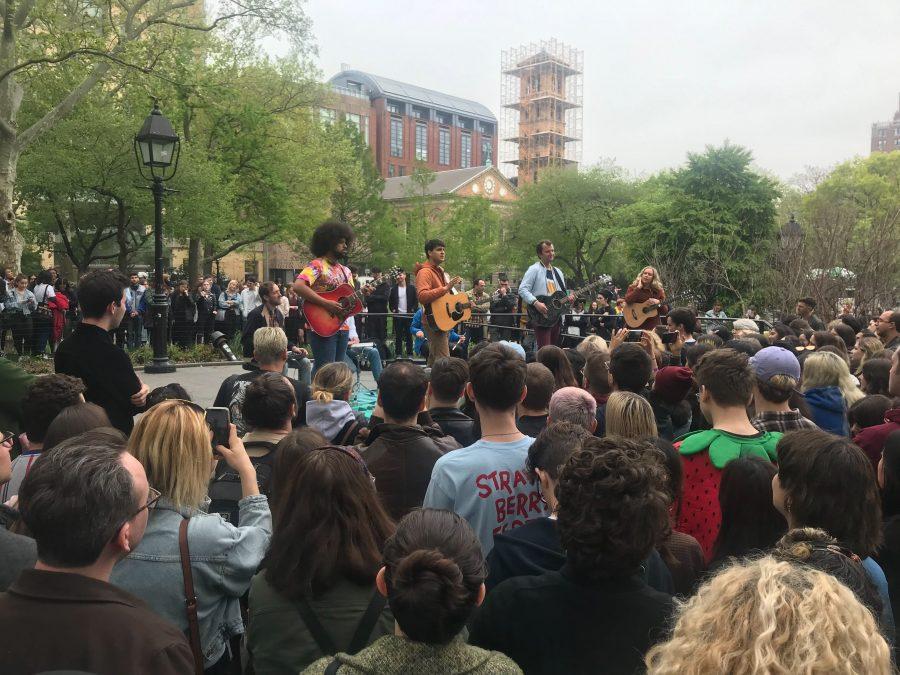 The band played a mix of classics and material from their new album, “Father of the Bride,” which was released today. Lead singer Ezra Koenig and bassist Chris Baio were joined by touring guitarists Greta Morgan and Brian Robert Jones on the stage on the east side of the park, with Bobst Library rising in the background.

Taking requests from the audience, the band played songs including “White Sky” and “Diplomat’s Son” off of their 2010 album “Contra,” as well as a handful of singles from the new album, including “Hold You Now” and “Sunflower.”

“I literally dropped everything and ran down the stairs to where they were playing,” GLS first-year Ann Fulton said in a text. “It was super good. They sound awesome live, and even songs that are hard to play acoustic, they still killed it.”

It was difficult for much of the crowd to hear the music or vocals, but the audience stood at quiet, rapt attention, humming along to “Sunflower’s” intricate guitar licks and the lyrics of old standbys like “Step,” off of 2013’s “Modern Vampires of the City.”

Koenig and company closed out the show with “A-Punk,” the breakout song from the band’s 2008 eponymous debut, as the crowd shouted along to the repeated “Hey, hey hey!”

“Father of the Bride” is the band’s first album since “Modern Vampires,” which won the Grammy for Best Alternative Music Album. The new release, representing a major evolution in the band’s sound, has already generated a frenzy of acclaim, with Vulture’s Craig Jenkins calling it the “frontrunner for best album of 2019.”

The band is playing a sold-out show Sunday at the newly reopened Webster Hall, and is touring around the world through the summer and fall (including a return to New York City on Sept. 6).