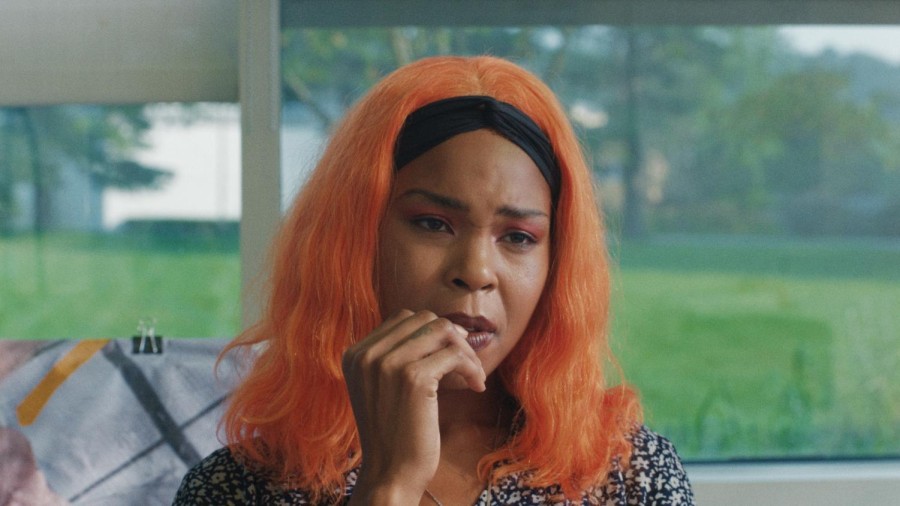 “The African Desperate” (2022) is an American film directed by Martine Syms. (Image courtesy of Natalie James)

Graduation is absurd. Although it’s regarded as a fundamental rite of growth and transition, the ceremony — or, rather, the awkward procedure — is never quite as climactic as it should be. Visual artist and film director Martine Syms is certain of this, as is her debut feature, “The African Desperate,” which follows a chaotic day in the life of a Master of Fine Arts student as she meanders the desolate fields of her liberal arts campus and the cloying future that’s ahead of her.

We meet our heroine, Palace (Diamond Stingily), during her final sculptural thesis meeting, sitting in a folding chair and sipping a Dixie cup full of celebratory orange wine. The panel of faculty members ask ill-advised questions about her career plans, to which Palace, with pursed lips and practiced skepticism replies: “Uh, I don’t know.” Palace’s dry delivery frames her as a reliably honest narrator and amplifies the chafing feeling of something coming to a close. She’s a character that can both roll her eyes at a tenured professor for “just being racist bro” and cry and smoke a joint as soon as they leave the room.

This defensive vulnerability steadily guides both Palace and the viewer through the remainder of the winding narrative, the premise being that Palace needs to wake up early in order to catch a train to Chicago to move back in with her ailing mother. However, her friends are determined to make her attend the “biggest bash of the year” — an event that makes Palace recoil even though she’s already agreed to DJ. he film dives into Palace’s life over the next 90 minutes as we watch Palace neglect her laundry, fumble around her bowl-cut sporting crush, and inhale a mise-en-place of assorted drugs, which includes mushroom-laced essential oils and a dime bag full of ketamine.

“The African Desperate” doesn’t rely on the effects of narcotics to drive the madness forward though. Instead, the film chooses to point out the inherent incongruencies of spaces that Palace already occupies. Throughout the narrative, it feels that each character is performing a monologue for an empty audience. Girls in knit two-pieces swing out of administrative offices, beanie-clad stoners mumble about their upcoming installations, and even some of Palace’s closest confidants seem to talk in algorithmically planned fragments that are equal parts esoteric slang and earnest naivete. These alien-like sequences are also contrasted with dazzling visual renditions of the digital world. For example, whenever Palace hops on a FaceTime call with her friend, the frame is suddenly colored by bubbly pastels as an angelic chorus plays in the background.

Other key examples are when Palace mimes a makeup tutorial out loud to herself in the mirror whilst getting ready for her function, or the jarring tiny memes that flash in the upper hand corner of a frame when a character makes a comment that isn’t quite worth Palace’s deadpan interference. Though wryly comedic and fairly off-putting, the “The African Desperate” finds its own version of profundity in the distant familiarity of these moments.

In these sequences, the film is pointing out how digital performance has become a much more comfortable crutch than our physical realms. By curating our lives to match the constructed images and trends that permeate social media, we can escape the bleaker realities that surround us. In Palace’s case, she can temporarily ignore the imminent unknown of continuing an artistic career that she’s grown to disdain — but Syms makes it feel as if this effect can wreak its havoc in any context.

It’s this disillusionment that makes the majority of the film resonate, but the effect also results in a sluggish pacing during the last third of the runtime. The central party is inevitably a flop, with promises of grand debauchery instead manifesting in an empty warehouse with drunk undergraduates leering in the corner.

Though emblematic of the disappointment that Palace is steeped in, the film also starts to feel like a gathering where you’ve overstayed your welcome. The art school cliches become grating as each sequence piles atop one another, particularly during a bizarre midnight meditation session. As Palace comes down from her high, so does the viewer, leaving the plot to deteriorate into a drunken stumble to get home or, at least, somewhere safe for the night.

However, it would be incorrect to assert that this aspect of the story negates any aspect of Stingly’s ingenious performance. She truly acts as the sardonic crux of this arthouse whirlwind. Her layered delivery at once grips the viewer with unnerving comedic timing along with her sublime sensitivity and cathartic bursts of frustration. She keeps you at arm’s length in order to show you the microfibers that lie beneath Palace’s laissez-faire attitude, imbuing the film’s irreverency with a much-needed dose of empathetic humanity.

Ultimately, “The African Desperate” is a film that finds a version of solace within an estranged apocalypse. It nails the terrifying freefall of graduation without leaning into the romantic or overly sentimental. Instead, the film sees protagonists like Palace as much more monumental than traditional landmarks of achievement. It’s concerned with what contexts inspire, anger and create someone like her, which are themes that extend beyond Palace’s chaotic 24 hours — and even the film in itself. As Palace remarks while lazing by a campus pond, “There are some things bigger than art.”