Off the Radar: ‘Woman in the Dunes,’ a twinge of horror in the eyes of monotony

Off the Radar is a weekly column surveying overlooked films available to students for free via NYU’s streaming partnerships. “Woman in the Dunes” is available to stream on Kanopy. 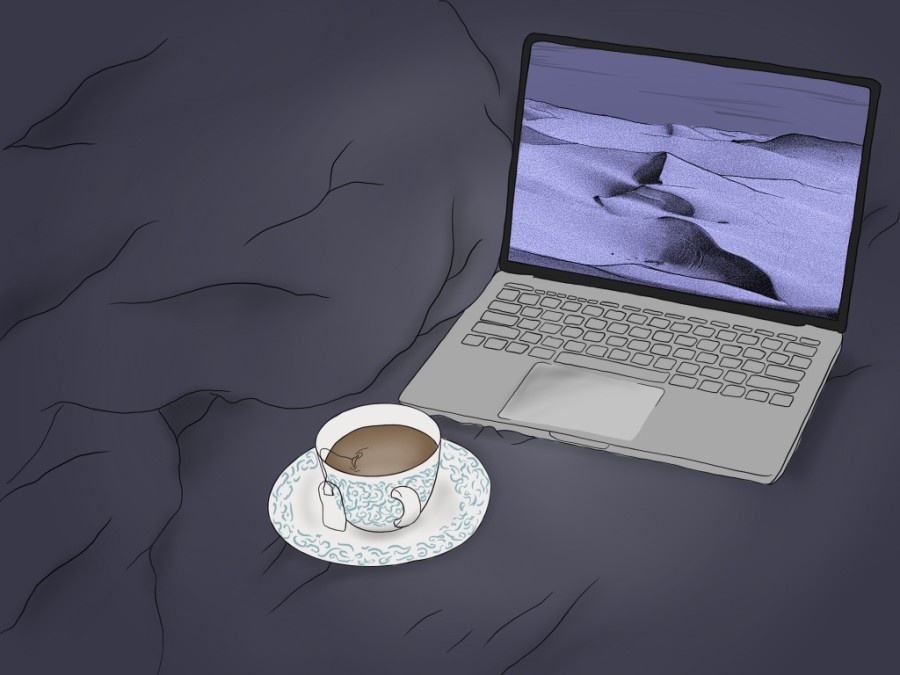 The 1964 film “Woman in the Dunes” is a Japanese film nominated for two Academy Awards. The film is available for free via NYU’s streaming partnerships. (Staff Illustration by Aaliya Luthra )

“Woman in the Dunes” (1964), directed by Hiroshi Teshigahara, is a tale confined to a pit in a sand dune. Amateur entomologist Niki Junpei (Eiji Okada) is on the hunt for a rare bug — a hobby picked up to escape the taxing doldrums of everyday life. During a scavenger hunt in a sandy seaside village, Junpei is convinced by a local to stay the night at the house of a woman (Kyōko Kishida) after missing the last bus back to Tokyo.

The young woman’s house, located at the bottom of a sand pit, is only accessible by a rope ladder. Junpei learns that the woman’s husband and daughter were buried in a sandstorm. The next day, when Junpei tries to leave, the rope ladder is gone.

Junpei learns that he has been trapped in the pit by the villagers to assist the young woman in shoveling sand to later be sold to a cement company. She tells him that it is difficult to live and work alone. The consequences of not digging the sand are grim — both are dependent on the villagers for rations while dealing with the threat of being swallowed by the sand.

The film, adapted from Kōbō Abe’s book of the same title, treads the line of horror and drama, heightened by the pangs of Toru Takemitsu’s score. We come to share Junpei’s claustrophobia and empathize with his desperation to escape and reclaim his freedom. Driven by stubbornness, Junpei repeatedly attempts to break free, but is always returned to life in the pit, which consists of eating, sleeping, working, and eventually, sex.

His life is stripped down to its core. It’s uncomfortable, especially for an audience who indulges in many pleasures beyond that core. The monotony puts Junpei on edge, dragging us with him. The woman, who remains nameless, adheres strictly to such a routine, content with her life.

Teshigahara’s direction plays with texture on all levels. The microscopic shots of sand on skin feel tangible and hint at eroticism. Teshigahara’s plays with sand’s form throughout the film, its malleability accentuated by intercutting shots of fragile falling sand.

By extension, sand is notorious for getting everywhere — especially on skin. And we see that frequently — Junpei and the woman are constantly coated in sand, which seeps into the house through the dilapidated roof. One extreme close-up of sand on the woman’s cheek encapsulates the hard task of living in a relentless environment.

The sand, the woman says, is always ruining things. The cyclical task of shoveling sand is an environmental necessity, since they would be buried otherwise. It’s fascinating to see the woman swallow at such a close view — and it’s also very eerie, demanding us to be conscious of our own human behaviors. It serves as a reminder of a humble surrender to nature.

The sand in the film also serves to underline its eroticism. One particular shot of the woman sleeping in the nude, covered in a light layer of sand strained by the roof, amplifies a carnal desire in Junpei. The first time the characters have sex is after Junpei offers to wipe the sand off her with a wet cloth. Sex seems to fall into place, something of an inevitability in the cycle of life. We see many instances of eroticism threaded in the film, particularly in baths, wiping sand off of one another.

Overall, “Women in the Dunes” is a fascinating character study. Rarely are we given another character to indulge in, only the dynamics of Junpei and the woman. Junpei, once a school teacher, is stubborn and obsessive. The woman is complacent, dutiful and adamant in continuing her way of life. Though there is a push and pull, both must work together to ensure their survival — one cannot live without the other.

“Woman in the Dunes” poses more questions than answers, but it does so in a way that leaves the viewer satisfied. Lingering sentiments remain, like sand sticking to our skin. The existential connotations of the sand, grains in a collective, seem to echo our place as humans in a society. When it’s stripped down, is this what life is? “Do you shovel to survive, or survive to shovel?,” Junpei asks the woman.