The HBO Max show combines romantic comedy and historical drama to create absurd shenanigans and campy gore that are sure to entertain. 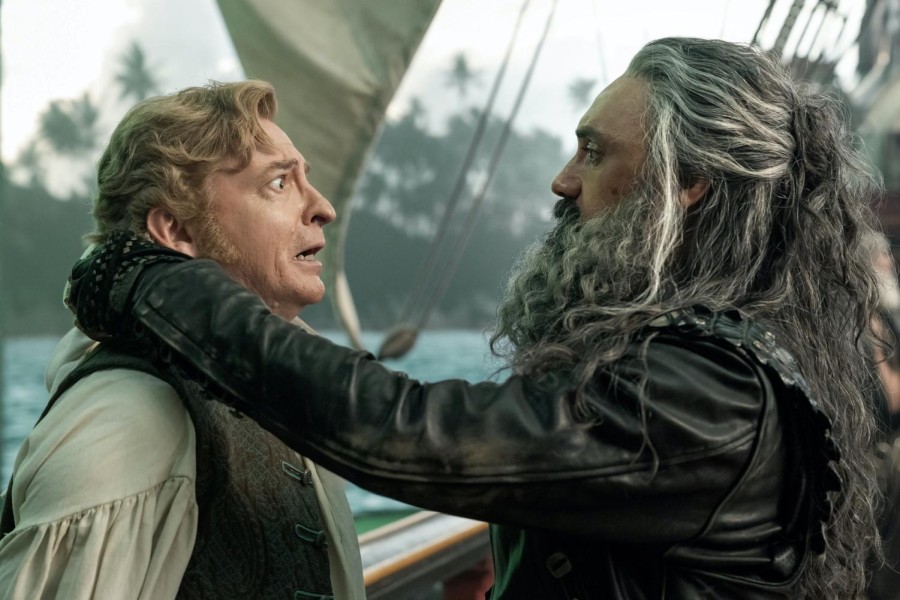 Pirates most often evoke images of skulls, swords and scurvy. Rarely are impassioned singers, coy scribes or sewing enthusiasts one’s initial thoughts. But that’s exactly the kind of depiction Taika Waititi offers in his latest show, “Our Flag Means Death,” which is loosely based on the life of 18th-century pirate Stede Bonnet.

Bonnet’s (Rhys Darby) departure from the aristocracy finds him as a captain on the Revenge overseeing several men who don’t agree with his leadership. This is only natural, given that Bonnet has a deep-seated fear of confrontation and brutality. The situation worsens after Bonnet accidentally murders a naval captain — a death which haunts him for the rest of the season.

The expectation that pirates should be inclined toward and unaffected by violence is explored through a lens of toxic masculinity. Bonnet struggles with conforming to the standard of the traditional merciless captain as it opposes his gentle and kind demeanor. Despite frequent pressure to change, he remains considerate throughout, as evidenced by his continued belief in talking through feelings before taking action. Though this altruistic nature often lands him in trouble, it also benefits the life of another captain, the bloodthirsty Blackbeard (Taika Waititi). This suggests that a pirate leading with compassion, rather than cruelty, can be more valuable than one might expect.

While Blackbeard is notorious for striking fear in his victims, Bonnet’s humane approach reveals an unexpected vulnerability in the former. The two quickly become friends following an agreement that Blackbeard, “Ed” to Bonnet, will teach him how to be a more ruthless captain through lessons on swordfighting and tormenting vessels. In return, Bonnet will demonstrate how to act more sophisticated, including a class about caviar spoons and escargot forks.

Blackbeard’s transition from a leader uninterested in life to one brimming with excitement emphasizes the benefits of tenderness, friendship and lifestyle changes. The budding romance between them is one neither could have predicted, but it’s endearing to watch two men who have never known love find it with each other.

Queerness and warmth are at the center of most romantic relationships in “Our Flag Means Death.” Oluwande (Samson Kayo) pines after Jim (Vico Ortiz), a skilled fighter he’s known for a year. Their individual growth aligns with their romantic evolution, as Oluwande is pushed to be more audacious while Jim learns to stop suppressing themself, culminating in a kiss. Lucius (Nathan Foad) and Black Pete (Matthew Maher) are already in an entanglement at the start of episode two. This provides a nice contrast to the slow burn of the other pairs, though viewers are still afforded scenes of the two navigating their newfound relationship with sincerity and heart.

This variety of queer relationships, especially in a historical context, is a sweet comfort. Few shows succeed in displaying so many couples at different stages with each receiving modest screen time and proper development. The minimal homophobia for an 18th-century period piece is refreshing and proves queer people lived and can be represented during this time.

Jim’s characterization expands on this theme. They are non binary and continue going by Jim even after their male disguise is unmasked. Their use of they and them pronouns is never a subject of discussion, just adopted immediately after a conversation about their gender. This unquestioned respect from friends and family members is reassuring and validating. Queerness and gender are not just fundamental to character dynamics, but their personal journeys, successes and the show’s entire direction as well.

These strong bonds between characters guide and heighten the comedy. When the Revenge’s crew want to scare an approaching vessel, they support every individual’s eccentric plans, such as the Swede’s (Nat Faxon) desire to sing and Wee John Feeney’s (Kristian Nairn) elation from dressing as the “Black Cat of Death.” Oluwande and Frenchie (Joel Fry), while aboard a ship for a high-society party, band together to steal money from wealthy guests. They split the considerable sum among themselves and the servants who helped them.

Too often, period dramas use historicity as an excuse to center white people or place people of color in white spaces without writing them to fit the context. “Our Flag Means Death” not only respects and uplifts its characters of color through complex storylines, but positions white people as easily fooled and acknowledges their history of violence.

The season ends as chaotically as it began: Bonnet retires to the family he left behind, abandoning Blackbeard and his crew. His eventual realization that this was a mistake comes too late, as Blackbeard has already catapulted himself into the second stage of grief: anger. Bonnet’s return at the last minute of the finale leaves viewers wondering whether this gesture is enough to win back the loyalty of his friends and the love of his closest comrade.