Clive Davis faculty Questlove won best documentary feature award with “Summer of Soul (...Or, When the Revolution Could Not Be Televised)” and NYU alum Ged Dickersin took home an Oscar for production work on best picture winner “Coda” at the 94th Academy Awards on Sunday. 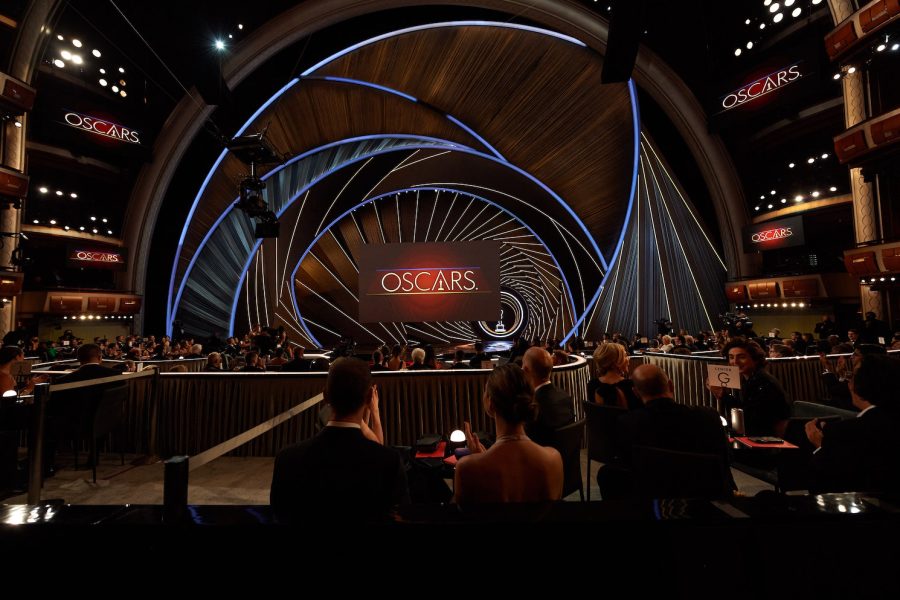 During the live ABC telecast of the 94th Oscars at the Dolby Theatre in Los Angeles on March 27. (Photo by Blaine Ohigashi / A.M.P.A.S.)

NYU alums and faculty won Oscars for best documentary feature and best picture and received nominations in multiple categories at the 94th Academy Awards on Sunday, evidence of the artistic achievements of the Tisch School of the Arts.

This year, six NYU alums and faculty were nominated for their work on four films. Earning nominations for “King Richard” and “West Side Story,” and earning Oscars for best documentary feature for “Summer of Soul (…Or, When the Revolution Could Not Be Televised)” and best picture for producer and NYU alum Ged Dickersin’s work on “CODA,” this year’s NYU nominees represent excellence in a diverse range of filmmaking practices.

Ged Dickerson was a co-producer on this year’s best picture winner “CODA.” The film follows a child of deaf adults, marking an important win for an underrepresented community. Dickersin has been producing feature films for over 35 years and had previously worked with “CODA” director Siân Heder. His award-winning work on “CODA” represents the first major recognition of his producing talent.

The ever-lovable Questlove, a faculty member at Tisch’s Clive Davis Institute of Recorded Music, won best documentary feature for his debut “Summer of Soul (…Or, When the Revolution Could Not Be Televised).” The documentary tracks 1969’s Harlem Cultural Festival, which came to be known as Black Woodstock, interweaving footage from six weeks’ worth of performances — featuring the likes of Stevie Wonder, Mahalia Jackson and Gil Scott-Heron — that took place at Mount Morris Park (now Marcus Garvey Park) in Harlem. Prior to Questlove’s documentary, no one had seen footage of this legendary festival, making the film’s existence all the more important as a rescued treasure of Black history.

Graduate acting alum Aunjanue Ellis was nominated for best actress in a supporting role for her work on “King Richard;” Film & TV alum Pamela Martin earned a film editing nomination for her work on the film. Ellis’ performance as the mother of famed tennis players Venus and Serena Williams rivals that of her stage partner Will Smith, who won best actor in a leading role. Offering a nuance-laden performance that nicely counters the film’s focus on the Williams family patriarch, Ellis was one of the film’s major highlights. Martin’s exquisite editing of “King Richard” not only highlights the subtleties of Ellis’ performance by focusing on her movements and shifting emotions in her facial expressions, but also makes the film a riveting watch — each cut in the intense tennis sequences accents the scenes’ intensity.

Steven Spielberg’s reimagining of the classic “West Side Story” earned seven Oscar nominations, two of which included NYU alums and faculty. Design for Stage and Film alum Paul Tazewell earned a costume design nomination for his dazzling work, and Tod A. Maitland, a faculty member at the Kanbar Institute, was nominated for best sound design. The two nominees added dashes of pizzazz to Spielberg’s musical extravaganza, preventing it from becoming yet another run-of-the-mill Hollywood remake. Crafting the look and sound of the film, these nominees developed its most essential elements, upping the ante with their elaborate costume design and bombastic sound.

The NYU faculty and alums nominated in 94th annual Academy Awards, including the newly minted Oscar winner Questlove and Dickersin, represent a wide array of NYU’s filmmaking talent and artistic sensibilities. The success of “Summer of Soul,” as well as the nomination of “King Richard,” are particularly significant as signals of change for the Academy Awards. These films by Black creators not only shine a spotlight on important figures in Black history. Similarly, the success of “CODA” and its focus on deaf communities also reflects the continued efforts of the NYU community to represent marginalized histories.