‘Marry Me’ is a Where’s Waldo of soulless product placement

If you’re reading this, chances are you’re not Jennifer Lopez. Neither am I. We are safe from her here. 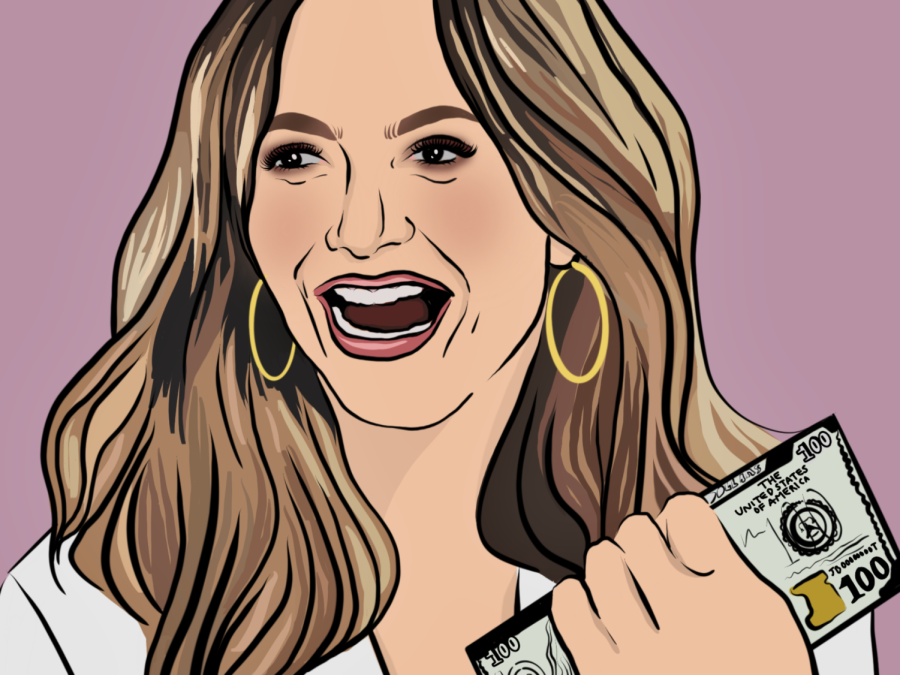 Jennifer Lopez and Owen WIlson star in the new rom-com “Marry Me.” The movie premiered on Feb. 11 and is currently in theaters. (Staff Illustration by Susan Behrends Valenzuela)

Remember the early aughts, when J. Lo was the Michael Jordan of romantic comedies? “Jenny from the Block” did not miss. We got “The Wedding Planner” (2001), “Maid in Manhattan” (2002), “Monster-in-Law” (2005) — films sidelined as chick flicks, belittled for daring to be sincere. Make no mistake, these movies plumb the depths of heterosexual partnership and return with a handful of truths about connection, forgiveness and — brace yourself — love.

You can imagine my anticipation, as an American woman who used to be an American girl, for J. Lo’s grand return to the genre that made her a household name. In “Marry Me” (2022), Jennifer Lopez plays international pop star Kat Valdez. Valdez plans to exchange vows with fellow international pop star Bastian (Maluma) live in concert to a streaming audience of 20 million. Charlie Gilbert (Owen Wilson) is a divorced dad and middle school math teacher who couldn’t care less about celebrity matrimony.

Propelled by what some may call fate — a coworker with extra tickets and a persuasive tween daughter — Gilbert attends the concert and plans get rearranged. Seconds before the nuptials, Valdez learns that Bastian has been unfaithful. In the heat of the moment, it’s Gilbert who she ends up marrying, a total stranger plucked from the crowd.

It is a delicious, absurd premise, reminiscent of “Notting Hill,” the 1999 film starring other rom-com heavyweights Julia Roberts and Hugh Grant. Hopes are high. But ultimately it is not nostalgia you feel while watching “Marry Me”: it is the dank haze of complete ethical compromise.

“Marry Me” is a thinly narrativized barrage of consumer propaganda featuring advertisements for Vitamix, S’well, Google and Coach, to name a few companies. The marriage-concert is sponsored by Citi National Bank, for crying out loud. This movie wants you to believe in communion, sure, but between brands, not people.

During class, one of Mr. Gilbert’s students says, “I made you a website using Wix.com,” turning the laptop squarely to the camera — it was at this moment that I feared “Wix.com” would be the last thing I heard before I died of a spontaneous brain hemorrhage. Correct me if I’m wrong, but while Jack was drawing Rose like one of his French girls, did he at any point pause to announce that he was using Prismacolor Premier® Charcoal? I thought not.

Why must American popular art be diluted — nay, polluted — with corporate imagery? Are we not bombarded enough in real life? “Hey Google, search lobotomies near me.”

Would it be neoliberal to do anything but reject “Marry Me?” Only God knows. Speaking of God, the concert begins with a borderline sacreligious performance of “Church,” an original song from the movie that boasts some of the most awkward sexual innuendos — “You’ve opened my gates and shown me the truth” and “I’m baptized in you” — of recent memory. Kat Valdez, but also J. Lo, is a woman who seems able to retain her social capital only insofar as she is willing to sexualize herself. A gilded cage — or catsuit — is still a cage.

Most of the song’s choreography involves J. Lo performing the sign of the cross and then petting her crotch. “Has the Pope seen this?,” I wondered. Here, as in many scenes, you are compelled to laugh — not out of joy, but to mask a genuine fear for the future of human society.

If we are to accept this as entertainment, we will have forfeited yet even more cultural real estate to the capitalist imagination, all in exchange for the fleeting feeling of not-quite-nothing. The pursuit of media-as-anesthesia is a kind of madness; we should expect more than what has been dropped in our lap.

The rom-com genre has, until recently, been one of the few protected locales in which we can really observe each other — in our folly, our ego, our splendor. Great rom-coms do not reinforce the logic of material consumption, they show how two people might love each other rightly. And they’re fun!

The song “On My Way (Marry Me)” begins, “Always knew you even when I didn’t know you, don’t make sense, but it do.” This is insulting. I refuse to believe that we are so deprived as to settle for such stunningly vacant lyricism.

The film’s dialogue is no better, leapfrogging from one pointless one-liner to another. “If you want something different, you have to do something different,” Valdez says multiple times. This is the kind of girlboss gibberish you would expect to find embroidered on a T.J. Maxx throw pillow, not in a multi-million dollar movie.

Growing up, I watched “Maid in Manhattan” over and over with my mom, who, like so many women, looked up to J. Lo. She was the exemplar of a certain American dream. Perhaps this is why “Marry Me” feels like such a betrayal. Lopez has retreated into the cloisters of extreme wealth, proving that she no longer makes movies for so-called ordinary people. Because “Marry Me” is not a film, but rather a gutless mélange of commercial advertising. Jenny, I’m afraid, Has Left The Block.