Review: ‘Cheer’ transitions from upbeat to disturbing in season 2

The second season of “Cheer” follows the Navarro College Cheer Team as it confronts fame and high expectations. 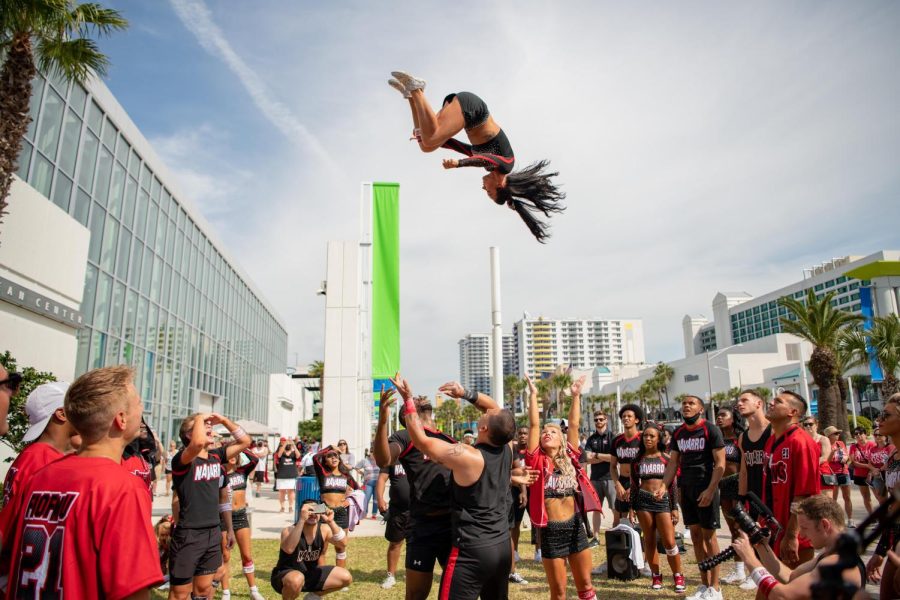 “Cheer” tells the story behind the Navarro College cheerleading team. “Cheer” is a television docuseries produced by Netflix. (Photo by Kyle Alexander, courtesy of Netflix)

Spoiler warning: This article contains spoilers for “Cheer,” seasons one and two.

After two years, Netflix is finally back with another season of the popular docuseries “Cheer,” but it’s not the same feel-good story as season one. Season two has a much darker tone, highlighting the negative impacts that fame has had on the Navarro College Cheer Team.

Season two is defined by the complicating factors of fame, crime, and COVID-19, which clash with the light-heartedness of season one. However, the heaviness of the second season makes the show intriguing in a new way, showing how the simple, cheer-dominated environment at Navarro is ruptured by the darkness of reality.

The second season of “Cheer” is jam-packed with drama, making it just as binge-worthy as the first. It picks up in January 2020, showing how the lives of Navarro cheerleaders and their coach, Monica Aldama, have been transformed. The team appears on major television shows such as “The Today Show” and “Ellen,” interacts with celebrities at the Academy Awards and is constantly bombarded by crowds of fans. The popularity of the first season has clearly given the cheer teams an exciting taste of fame, but as the season unfolds, it is revealed that their success has also left them with a new set of problems to confront.

The high status of returning cheerleaders from season one creates a tense dynamic on the team as new cheerleaders try to fill in the gaps. Unlike in season one, there is a strong sense of pressure on the team to live up to the reputation they built in the previous season and to satisfy their expectant fans. The high stakes result in several outbursts during practice and dramatic altercations between team members.

The drama only gets more intense when the team steps off the mat. The breaking news regarding Jerry Harris’ arrest on federal child pornography and sexual misconduct charges sent shock waves through the Navarro cheer community, with its impact being amplified by head coach Monica’s absence. It is truly heartbreaking to watch the team struggle while Monica takes time off from coaching to film “Dancing With The Stars.” New and returning cheerleaders on the team feel abandoned by Monica, further fracturing an already broken team culture.

Along with the ample drama at Navarro, we get an inside look at the team dynamic of Trinity Valley Community College, Navarro’s rival. Almost half of the season is devoted to interviews with the coaches and cheerleaders at TVCC, as well as extensive footage of their practices. Season two encourages the viewer to become attached to TVCC’s journey, which left me feeling torn while watching them both compete at Daytona Beach at the end of the season. While season two won’t draw you in with an optimistic story like season one did, the web of drama will keep you engaged and make you eager to find out how it all ends.

While the stories and messages conveyed in season two add a new level of profundity to the show, season two is not particularly inspiring to watch. It is hollow compared to the high-spirited nature of season one. Season two falls apart in an attempt to accommodate too many narratives rather than keep things simple as the producers did during the first season. In the first four episodes, the producers try to preserve the storyline that initially made the show so popular: the road to Daytona. However, the COVID-19 pandemic and Harris’ arrest make it difficult for the producers to use the same formula as season one. After episode four, the plot becomes increasingly chaotic as new themes clash with the producers’ continued commitment to the original storyline.

While the situation with Harris is alluded to briefly at the beginning of the season, it is not until the fifth episode that it is recounted in excruciating detail. The episode includes an exclusive interview with the first two victims that came forward to report Harris’ sexual misconduct. inspiring several other victims to do the same.

The bravery of the victims is incredible, but the episode is brutal and difficult to watch. Even worse is the fact that the producers attempt to jump back into the journey to Daytona after episode five as if nothing had happened. If season two was already convoluted, this decision only confirms it.

The second half of the show is tainted by the grim developments of episode five, leading to an dissatisfying conclusion to season two. Season one was enjoyable because of the simplicity behind its entertaining buildup to Navarro’s well-earned victory at Daytona. But the competing narratives are overwhelming, diminishing the quality of the viewing experience. Overall, the second season of “Cheer” was certainly bingeable, but its complications and bleak realities sadly spoil the fun of the original.