Review: ‘Electra, My Love’ embodies the limits of revolution myths

Miklós Jancsó’s revolutionary 1974 reimagining of the ancient Greek myth of Electra is currently playing at Metrograph as part of a retrospective on the Hungarian director. 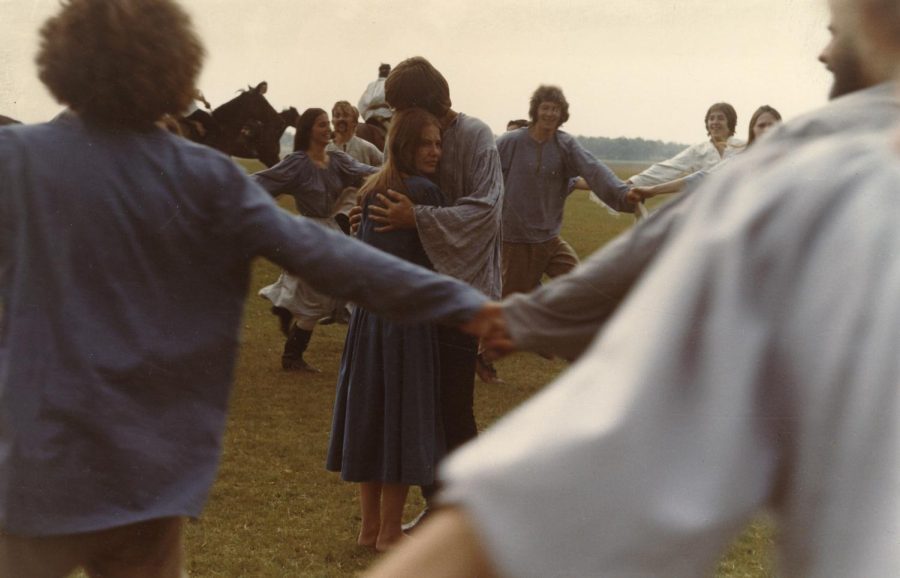 Miklós Jancsó reimagines an ancient Greek myth in his 1974 film currently playing at the Metrograph. “Electra, My Love” uses an ancient narrative as a statement on contemporary politics. (Image courtesy of Metrograph and Kino Lorber)

In 1974, Hungarian director and screenwriter Miklós Jancsó said, “I used to think that humanity could be saved.”

But “Electra, My Love,” his film from the same year, abandons that philosophy for a more optimistic narrative that urges leftist revolution and community rituals of rebellion. The film is currently on view at the Metrograph as part of a six-part series of Jancsó films, works that interrogate post-communist Hungary and its modern leftist movements.

“Electra, My Love” reimagines the ancient Greek myth of Electra and the murder of her father Agamemnon. In the film, Electra’s father is killed by Aegisthus (József Madaras), a tyrannical ruler. The film’s setting in rural Hungary recontextualizes her character as not only a symbol of interpersonal vengeance but also a figure of political resistance.

The film takes place during a community’s annual celebration of “truth,” in which an orchestra of villagers reaffirms its loyalty to those in power. “Thanks to you, great lord,” identically dressed men chant above the sound of whips. “For the sweetness of the sugar, for the abundance of the harvest, for the birth of the children, for the pleasantness of dreams.”

Electra (Mari Törőcsik), however, seems to exist as a reminder of the necessity of resistance. “Woe to you who worship the tyrant,” she narrates in the film’s opening shots. “Has anyone ever spoken the truth at this celebration?”

When Electra’s brother Orestes (György Cserhalmi) comes to the village, Aegisthus watches as Electra kills him. But after Aegisthus tortures her with talk of her powerlessness, Orestes reappears, ensnaring Aegisthus in a netting of rope. In the subsequent scenes of celebration, the villagers continue to dance and rejoice, stampeding Aegisthus until he falls.

At first, Electra’s constant words of revolution – “You have kissed the feet of the murderer … What good has it done for you?” – undercut the passive obedience of the masses, making it all the more disheartening when her body becomes part of the ritual as well. Her arms lift gently as she is guided toward different bodies and locations, her deliberate turns in perfect rhythm with the unquestioning ritual dance of the others. Even when she walks backward, even as the encircling camera captures her from every angle, she becomes not a revolutionary but rather the object of desire in this spatial and political dance, in which all the characters already have their cues. Jancsó seems to reject the notion that revolution was ever possible.

In one of the film’s final frames, two guns rest on a bed of dandelions. Orestes and Electra each lift one as Orestes asks in a monotone voice, “Will we have the strength to die every single day?” Electra responds, equally blasé, “We will have the strength to start over every day.” As they pace around the flowers, the camera follows their bodies in a hypnotic circular motion, until at last they shoot each other, both collapsing onto the grass.

An abrupt cut to Electra and Orestes embracing changes the retrospective meaning of the entire film: The two smile at each other in warm light, dancing with the villagers, before a red helicopter lifts them into the sky. The celebration, which, at first, appeared to be part of an ancient community’s oppressive nationalist rituals, was all along a performance for people living in egalitarian bliss, to remember the tyranny of the past. As they hold hands and run in ecstasy, Electra’s voice tells the story of the firebird, a metaphor for revolution, which “must die every single day so that it can be born again.”

What was in its beginning a fascinating cinematic metaphor of physical and historical movement is thrown aside for an uncomplicated, albeit still resonant, ode to the power of storytelling in cultural memory. As an audience, we know only the tale of revolution. After an initial excitement of a moment of retrospective clarity, the simplicity of the utopian ending just disappoints.

“Electra, My Love” introduces themes of power and memory through its distortion of myth and reality, but only within the myth does it interrogate how the restless sentiments of rebellion can be caught in the choreography of history. Especially after Jancsó’s more skeptical “The Confrontation” (1969), it would have been interesting to see him explore a more critical notion of revolution, calling into question the socialist realism of utopian cinema. Though “Electra, My Love” speaks to Jancsó’s intellect in the transformation of an ancient narrative into a prophetic nod to contemporary politics, its unfettered belief in revolution makes the film itself little more than myth.

“Electra, My Love,” which was restored in 4K from the original 35mm camera negatives by the Film Archive of the National Film Institute Hungary, is now on view at the Metrograph at 7 Ludlow St.