"Dexter: New Blood" is a miniseries and continuation of "Dexter" streaming now on Showtime, Prime Video and Hulu. The show follows Dexter, a serial killer who attempts to turn his life around by developing an inconspicuous alias and moving to rural New York. 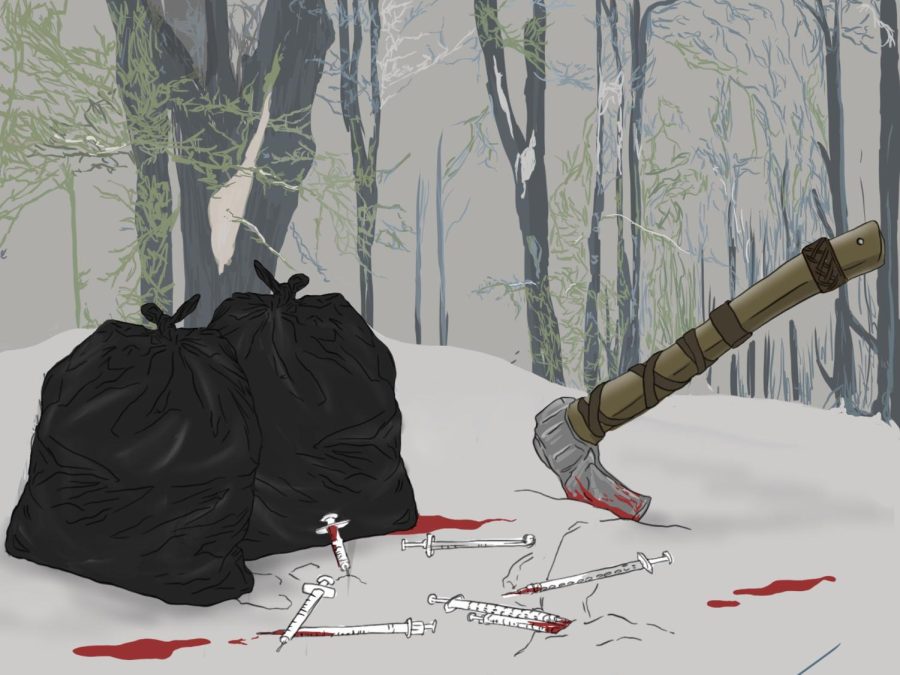 “Dexter: New Blood” is a miniseries and a continuation of the original “Dexter.” The show seeks to appease fans disappointed with the original show’s finale. (Staff Illustration by Aaliya Luthra)

In an interview for The New York Times, actor Michael C. Hall remarked that he likes to think about his own obituary — he believes that “Dexter” will likely make its way into the first paragraph, “if not the first sentence.”

The Showtime drama premiered in 2006 and ran for eight seasons until its final episode in 2013, which marked one of the worst-rated series finales of all time. The original series follows Dexter Morgan (Hall), blood spatter analyst for the Miami Metro Police Department by day and vigilante-esque serial killer by night. After witnessing his mother’s brutal murder when he was a toddler — a moment he often refers to as being “born in blood” — he was adopted by Harry Morgan (James Remar), the police officer who found him at the scene. Over time, finding it difficult to control Dexter’s violent tendencies and emotional apathy, Harry does what any father would do: He crafts the perfect serial killer code of conduct, teaching Dexter how to evade the law while feeding his “dark passenger” by killing only those he believes deserve it — other killers.

Now, nearly a decade later, we’re reunited with Dexter in the small town of Iron Lake, New York, where he’s known only as a friendly employee at the local sporting goods store and the boyfriend of Angela Bishop (Julia Jones), the town’s police chief. Premiering in November 2021, “Dexter: New Blood” is a miniseries developed as a continuation of the original show, with the primary objective of appeasing fans’ dissatisfaction with the 2013 finale. While some things never change — Dexter’s lack of social skills, tendency to be in proximity of law enforcement and unmatched appetite for breakfast food — it’s revealed that in the years after Dexter faked his death by driving his boat directly into a conveniently-timed hurricane, he hasn’t killed once.

Somehow, after all these years, the show keeps viewers rooting for its murderous protagonist. The kill-room scenes were always the most intriguing, and are primarily what made this revival so nostalgic. As much as the excitement in watching “Dexter” occurs through the thrill of the chase, it is Hall’s introspective monologues and dramatic interactions with his victims that differentiate the show from other takes on the popular antihero trope.

The fascinating thing about Dexter is that despite his supposed lack of empathy, he is incredibly adept at eliciting it from viewers. Often, his conversations with his victims revolve around self-improvement — not just as a serial killer, but as a father, husband and brother. This certainly doesn’t justify his actions, but in many ways it characterizes him as the good in a binary moral landscape, a theme that remains consistent in “Dexter: New Blood” up until the final episode.

In this case, the concept of nature versus nurture, with which Dexter so often struggled in the show’s original run, presents itself in the reappearance of Harrison Morgan (Jack Alcott), the son he abandoned. Now a teenager, Harrison has managed to track down his father. The development of their tense relationship characterizes the rocky narrative arc of “Dexter: New Blood.”

The first half of the season is incredible: Hall slips back into the role with ease; and while the show maintains many of the stylistic choices that made “Dexter” so interesting, it also shifts slightly in an effort to conform to recent television trends and cater to a younger audience by exploring the relationship between Harrison and Angela’s daughter, Audrey Bishop (Johnny Sequoyah).

As much as the show has always been a thriller, “Dexter: New Blood” delves deeper into the philosophical elements of “Dexter” that make the eponymous character so morally ambiguous. His inner struggle was always one of deciding whether he is evil because he was taught to kill, or if he kills because he is inherently evil. After Harrison begins to display similar violent tendencies, the two ideas can no longer coexist — killing, for Dexter, is solidified as a calling, and the only way he is able to emotionally reconnect with his son.

At the same time, in the second half of the season, Angela begins to uncover the truth about Dexter, namely that he was the “Bay Harbor Butcher,” the perpetrator of a series of murders that he pinned on a colleague in the original series. As difficult as it is to believe that with just a few Google searches a small town cop managed to uncover a crime the entire Miami Police Department couldn’t, it makes for a somewhat satisfying finale — anybody else who has ever come close to knowing the truth about Dexter is dead.

The season culminates in Dexter’s arrest. Days before he plans to leave town with Harrison, Angela confronts him with evidence of his past murders and another he committed in Iron Lake only months before. This is where the show, once again, seems to take a turn for the worse — Dexter, proving to be uncharacteristically cocky in the face of capture, only manages to escape by killing the sheriff on duty. After Harrison agrees to meet Dexter in the woods before their escape and learns what he has done, he gives Dexter an ultimatum: He needs to turn himself in or Harrison will shoot him. Dexter’s decision — although, perhaps, predictable — satisfies the need for a definitive ending while revealing where his priorities lie.

One of the most interesting things about “Dexter: New Blood” is that it reflects how we, as a culture, continue to make and enjoy shows that so strongly contradict our actual values, encouraging viewers to side with a villain while simultaneously forcing them to acknowledge that their actions are wrong. This, perhaps, is why no variation of a “Dexter” finale will ever be fulfilling — those who side with Dexter only do so because they have been forced to empathize with him.

All this time, the show serves as Dexter’s personal kill room, with viewers attempting to understand his motives the way he does with his victims — though he isn’t granted the theatrical ending he gave so many others. While I think the miniseries is certainly worth watching, particularly in the context of revising the original ending, its pitfalls lie primarily in the pacing of the final episode. Part of the novelty of the show has always been Dexter’s self-awareness as the villain, but his overconfident demeanor in the series’ final moments contradicts that. At the same time, maybe “Dexter” and “Dexter: New Blood” aren’t the kinds of shows meant to leave viewers feeling fulfilled. In all his intricacies of character, Dexter wasn’t actually that complex. As much as he advertised his own emotional unintelligence to viewers, he chooses fatherhood over the very first rule of the code — self-preservation.