Review: The brittle poetry of ‘The Girl and the Spider’

“The Girl and the Spider” is a graceful film that explores how love can leave the loss of friendship in its ashes. 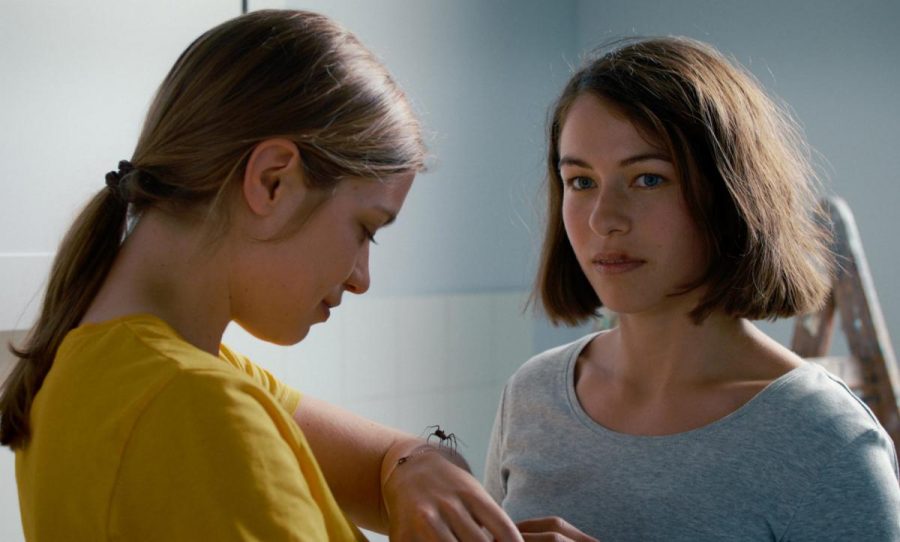 “The Girl and the Spider” explores themes of love and loss. The film centers on two roommates clashing as one of them moves out of their apartment. (Image courtesy of Cinema Guild)

The soft Swiss drama “The Girl and the Spider” (dir. Silvan Zürcher, Ramon Zürcher) captures the emotional side of a tense relationship between former roommates, Lisa and Mara, as Lisa prepares to move out of their apartment. As Mara is left alone, she uncovers deep feelings she holds for Lisa, ultimately leading her to the realization that being an adult means dealing with life’s cruel and unanticipated plans.

Mara tends to disrupt those around her at the worst times, as if she’s attempting to halt her old friend from moving forward with her life. Throughout the film, Mara struggles to accept that people must be allowed to choose their own paths, even when those paths differ from her own. This flaw makes Mara an intriguing anti-hero — the audience feels compelled to root for her to change her ways.

“The Girl and the Spider” is an enticing work that, through its symbolism, takes the audience on a rollercoaster of emotions as the film follows the collapse of Mara and Lisa’s tense friendship.

The film’s pastel color scheme draws viewers into the world of the characters. The cast don bright yellow or blue articles of clothing that match the vibrant tones of the house’s walls. This brightness, though, fades over the course of the film, reflecting dramatic shifts in the characters’ relationships. As the light dims, the consequences of Mara’s romantic attachment to Lisa become more threatening. The film’s camera techniques depict this deconstruction with close-ups of characters’ heads and intensely focusing on key objects and images, thus intensifying the narrative.

As Mara confesses her romantic feelings for Lisa, the friends’ conflicting perceptions of their relationship come to a climatic head. The importance of this confession doesn’t hinge on the romantic potential of this relationship, but rather how Lisa’s rejection of Mara forces her to grapple with her own shortcomings. Through this tense exchange, Mara comes to the realization that she needs to stop prioritizing her personal needs over the autonomy of her loved ones — even if it requires her to let go of an important relationship. Without Lisa, life is now less vibrant, contrasting with Mara’s perspective at the beginning of the film. She no longer lives with the ambition of gaining Lisa back — she must face life on her own.

Even though the film is in German, “The Girl and the Spider” speaks in a universally understandable symbolic language. The film’s central motif is a closeup of a spider — at one point, Mara explains how the disappearance of a beloved spider from her childhood left her feeling empty, an anecdote that parallels Lisa’s departure from Mara’s life. Like this recurring spider, “The Girl and the Spider” reminds us of the beauty of transience and the solace found in the act of letting go.