Review: ‘The French Dispatch’ and the tyrannical tenderness of Wes Anderson

Wes Anderson’s 10th feature film, “The French Dispatch,” presents itself as an apogee of aesthetic redundancy. 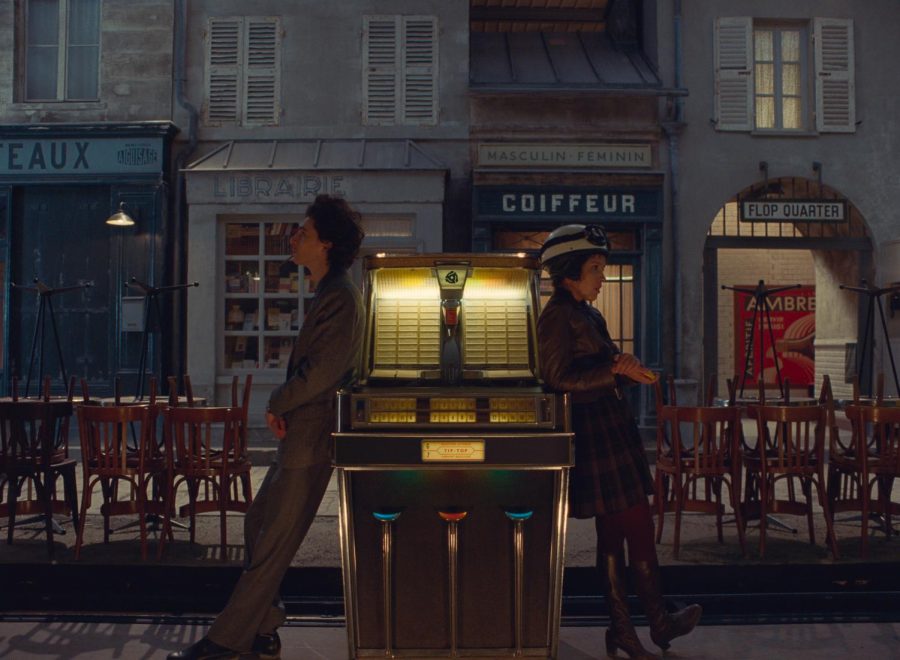 “The French Dispatch,” a 2021 film written, directed and produced by Wes Anderson, explores the separate storylines of three past articles being republished in honor of the dead editor of The French Dispatch Magazine. The image shows a scene between Zeffirelli (Timothée Chalamet) and Juliette (Lyna Khoudri). (Image courtesy of Searchlight Pictures)

Wes Anderson does not make films that take place on planet Earth. No, his films take place in the mind of the idealistic teenage wonderer who ponders atop the toilet for too long while rummaging through the many copies of the New Yorker stacked at their side.

Anderson’s latest film, “The French Dispatch,” is a dainty work of faux-funniness, a style and new vision of what American cinema could be. Constructed as a New Yorker-esque three-part anthology sandwiched between the inevitable preamble and postscript, the film is an homage to the stories from which he’s carved out a career. It captures the heartbeat of a bad literary reading at KGB Bar in which the writer favors ornateness and lucid dialogue over podium humility and emotional resonance.

As expected, all of Anderson’s Muppets are there — Tilda Swinton, Adrien Brody, Bill Murray, Tony Revolori, Edward Norton, Owen Wilson, Saoirse Ronan and so on. But there are also a few new additions thrown in the mix, most notably Benicio del Toro, Jeffrey Wright and Timothée Chalamet. As expected, they are all perfectly fashioned, as if Anderson conflated costuming with characterization and produced a beautiful series of soulless high-fashion dolls.

Swinton, playing lecturing art-journalist J.K.L. Berensen, exemplifies the aforementioned marionette-ism. The story she recounts atop a grand stage before a hall of presumably giddy dilettantes is titled “The Concrete Masterpiece.” It concerns Moses Rosenthaler (del Toro), a deranged artist serving a lifetime sentence, who has fallen in love with his prison-guard and muse, Simone (Léa Seydoux).

Anderson jumps back-and-forth in time, cutting between Swinton’s enunciated — albeit passionless — narration and the story-in-question. The segment arbitrarily switches between color and black-and-white, creating a richly textured portrait of fiction so enamored with its own composition that it often forgets what it set out to represent in the first place.

The same can be said about the film’s following chapter, “Revisions to a Manifesto.” Foreign correspondent Lucinda Krementz (Frances McDormand) gets caught up in a watered-down version of Philippe Garrel’s “Regular Lovers.” In Anderson’s retelling, France’s militant student protesters are playing chess with the mayor instead of building barricades and beating up cops. They hope to gain ratification for their poetically ambiguous manifesto by outwitting the governing powers and bureaucracy that be, taking a much more polite approach than the French students of May 1968 who inspired the story.

The story says a lot about how Anderson views the world — how a young idealist perceives reality while lost in thought. It appears Anderson views journalists in the same way children think about astronauts: wondrous explorers of new frontiers rather than mere space technicians. It’s an endearing thought, but an uninformed one.

Anderson leaves the best for last with “The Private Dining Room of the Police Commissioner.” This third and final story is narrated by Roebuck Wright (Jeffrey Wright), a character built as a loving homage to James Baldwin and A. J. Liebling, according to the New Yorker. What differentiates this story from the rest is its clear emotional core: Whereas the first two sections evenly spread their focus among multiple characters, the third centers its attention on Wright. It’s a testament to his life as a suave, smooth-talking writer overwhelmed and enamored with every aspect of life, from the decoration of rooms to the yearning of the heart.

In following Jeffrey Wright’s gait across Anderson’s fabricated sets of material ultra-whimsy, it becomes evident that Wright walks, talks, laughs and breathes. Jeffrey Wright imbues life into Roebuck Wright through genuine performative expression, whereas other characters in the film such as Chalamet’s Zeffirelli could be replaced by cardboard cut-outs given their being exists in fleshy aesthetic facades. Even worse, characters like Tilda Swinton’s J. K. L. Berensen act like mere microphones for Anderson’s monologues — they could be replaced with phantoms and the movie would suffer no true impairment.

It’s the glaring hollowness resulting from an overemphasis on fancy clothes, shots and faces — rather than a concern with developing rich characters and a graspable setting — that makes “The French Dispatch” such an alien product. Anderson’s love for the New Yorker is apparent, but not quite understandable. The stories he has his models play out allude to emotions without actually expressing them. Like a text written by a robot, everything that should be there is still there, but feels off — too articulate, too artificial, too untrue — looking for tears and kisses despite not ever having experienced the tenderness of either.