When COVID-19 struck New York City, five young filmmakers documented the ways in which the pandemic caused major upheavals in their everyday lives. 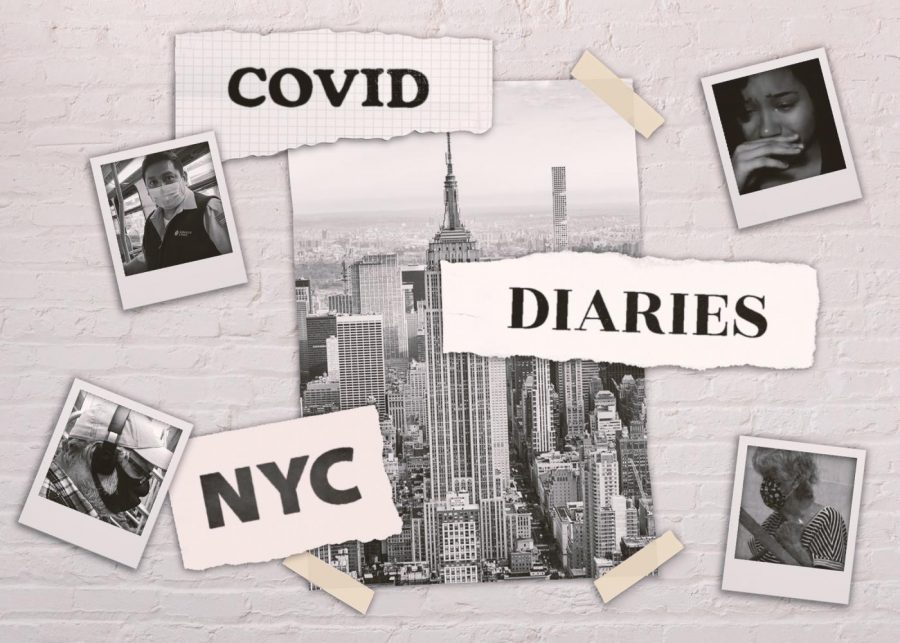 The new mini-documentary "COVID Diaries NYC" is created by five young filmmakers. They recorded their experience of the first few weeks of the COVID-19 pandemic. (Illustration by Chandler Littleford)

No one was prepared when COVID-19 struck the United States in full force, flipping lives upside down and shifting the highly anticipated turn of the decade into a nightmare. For many New York City residents, the pandemic meant the departure of the bustling lifestyle and the disappearance of normalcy.

Instead of staying complacent during the stay-at-home order, five young filmmakers documented the early weeks of their experiences in the mini-documentary, “Covid Diaries NYC.”

Marcial Pilataxi lives with his grandmother. He makes a living as the building’s super, collecting rich people’s trash in their Manhattan apartment — a less than desirable livelihood, even in a pre-pandemic era. As Pilataxi speaks, you can hear the sadness in his voice, yearning for a life beyond the one he’s trapped in. In one part of the film, he and his friends are confronted by an agitated man, going on an expletive-filled rant towards them for not wearing masks. Their altercation demonstrates the increased tension as a byproduct of the pandemic’s threats to safety.

Diagnosed with four pre-existing mental health conditions, Aracelie Colón found herself completely void of a support system. When her school shut down, it added an additional stressor for her and her parents amid the chaos.  She cries on the phone, “I don’t even get to be a teenager,” a sentiment echoed by many adolescents during this time. Due to the isolation and lack of social interaction, Colón is just one of the many people whose mental health took a turn for the worst.

As the daughter of an MTA essential worker, Camille Dianand watched her father contract COVID-19. While the bonus footage reported that he made a full recovery, not all are as fortunate. She captured footage that featured her father coughing in the background, a haunting reminder of the relentless nature of the virus. Not only is contracting COVID-19 a serious concern for the patient, but also those in close proximity to them. In many New York City apartments, where space to distance is limited, it becomes difficult to ensure that you are there for sick loved ones while remaining cautious and safe.

Shane Fleming lives in Stuyvesant Town. Seeing both of his parents lose their jobs, Fleming notes the looming possibility of not being able to pay bills. Even upon taking a leave of absence from New York, his family could not escape the frightening realities that awaited them at home. Like many, they stressed over finances and felt as they lost their financial control in the early days of the pandemic. In June 2020, the unemployment rate in New York City had reached a high of 20.3 percent, depriving over a million people from a steady source of income. Although that rate has decreased in the past few months, many still struggle to get by.

Arlet Guallpa — the last filmmaker to share her story in this documentary —  watches her immigrant parents go off to their frontline jobs each day. As a city bus driver, her father knows that he has no choice but to continue to work and provide for his family. Guallpa includes scary footage of ambulances and men in hazmat suits cleaning her apartment building after the death of a resident, emitting an eerie resemblance to something out of a sci-fi movie.

Taking a break from the devastation after the arrival of COVID-19, the film also reminds us of the death of George Floyd and the early protests in support of the Black Lives Matter movement. Balancing pandemic safety precautions with collective activism proved tough and dangerous at times, but further demonstrated the strength and tenacity of activists as they continue to fight for racial equality.

Animated by Rosemary Colón-Martinez, “Covid Diaries NYC” is a critical documentation of the wide-spread devastation that many are forced to cope with, demonstrating the variety of effects that the pandemic has on people. The raw footage into the lives of everyday families is heartbreaking, but a harsh reality for so many during these arduous times. The vulnerability and honesty displayed throughout the film was refreshing, especially when attempting to place a positive spin on the pandemic often feels unsuccessful. Just over a year after the initial landfall of COVID-19, the film now serves as a nod to a brighter future that lies ahead.