A survey of multiple theaters in New York City pointing to a new vision of cinephilia where the online sphere and curatorial practices create new viewing patterns. 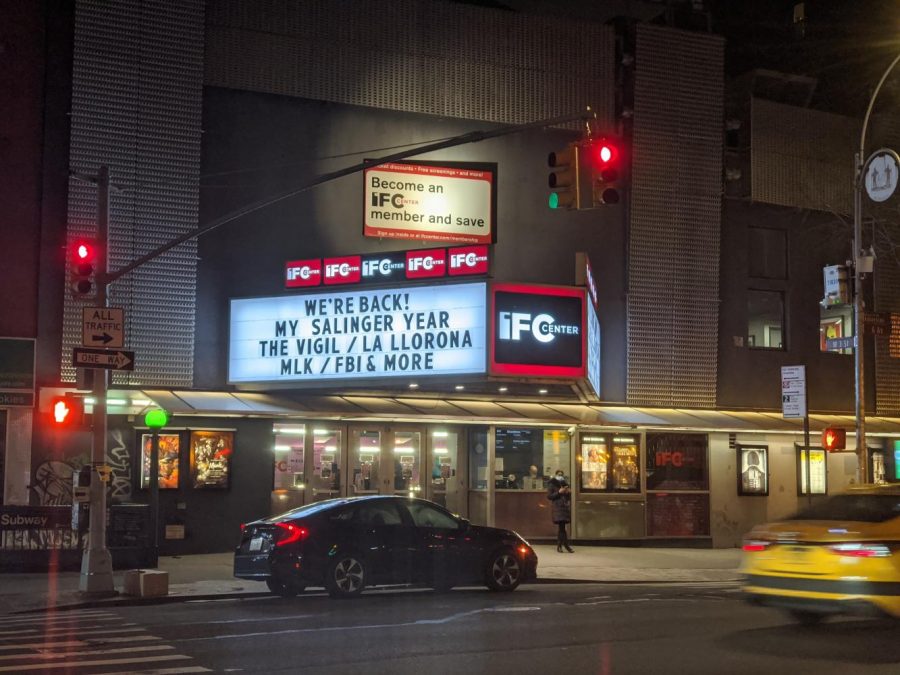 Last weekend, a new withdrawal appeared in my bank account: $23.95, the price of AMC’s A-List. This is approximately 1.3 times the monthly cost of a premium Netflix subscription, 1.6 times that of HBO Max, and nearly double the cost of an Amazon Prime membership. I made sure to make good use of it — since theaters reopened on March 5, I’ve watched six films at AMC.

On top of spending nearly $100 on streaming per month, now I will have to add another $25 in order to get a theatrical experience. Why? What’s the point of going to a cineplex after a year of inactivity? Why go to a movie theater showcasing faded posters on stained windows when you’ve got the world at your disposal through a plethora of streaming services? To be honest, I don’t know yet. The one thing I do know is that returning to a New York City theater has been enlivening.

COVID-era moviegoing is certainly not without its precautions. New York institutions such as Independent Film Center and Angelika Film Center are taking extensive measures to make sure their customers are safe, such as blocking off rows and limiting capacity to as few as nine people. Sacrificing ticket sales to enforce social distancing guidelines is not an easy decision, especially for independently-owned theaters that have generated close to zero revenue over the past year. The trade-off is greatly appreciated by New Yorkers everywhere, many of whom are excited to get back to the big screen.

The cineplex experience is very different now. One year ago, it was hard to stretch your legs in a movie theater, but now, you can barely see the others in the theater and leisurely stretch out your legs. Theater attendance is no longer decisive when it comes to proving a film’s market appeal. This means that theaters have become a destination for few others besides cinephiles who yearn for the big-picture experience.

“I was absolutely thrilled,” a moviegoer told WSN. “I think I’ve seen all of the films on Netflix at this point — I’m very happy. I have friends who don’t think it’s ok. I’m not really concerned about it. I think [theaters] are taking the necessary precautions. People are wearing masks, and there are a lot of people who have gotten the vaccine already.”

Given cinephiles and moviegoers still revere the theatrical experience, it’s been interesting to see streaming giants assist independent theaters by lending titles to their marquees. This move fortifies Netflix’s relationship with the live theater experience, arguing that streaming services still value the big-screen experience and will continue fighting to preserve it by playing titles like “Marriage Story,” “The Irishman” and “Roma” if the opportunity presents itself. The independent theater still holds a particular appeal among cinephiles, acting as an immersive extension to the network of choices streaming provides.

Even with streaming giants supporting independent theaters and cinephiles rushing to the movies, concerns over theaters’ survival remains. The issue revolves around generating attraction. During my visit to the Angelika on March 7, I kept wondering if more people would come to the showroom. In the end, I found that my friend and I were the only two attending a screening of the war drama and New York Times Critic’s Pick “Quo Vadis, Aida?”

As theaters were deserted, a sense of distance between cinephiles and the ever-evolving cinematic culture manifested itself. As a result, a lot of the titles independent theaters are advertising feel more obscure than ever before.

“They shouldn’t have shut down for so long,” a moviegoer outside of Manhattan’s IFC told WSN. “People have lives they need to live. This is about people’s livelihood. Small businesses. People need to pay rent. I mean, the bank doesn’t stop to collect people’s money.”

In an effort to get people reacquainted with the movie theater experience, independent outlets like Screen Slate, a website for cinephiles designed to highlight curated films and their showtimes in New York City, have begun acting as a resource for cinephiles looking to get back into the groove of moviegoing. The reopening of theaters has been witness to a convergence of cinephilic spaces, wherein the online and physical play off each other to arrive at a sustainable point of existence.

With more and more theaters reopening, it will be interesting to observe how film culture returns after its disruption, if independent theaters will pave their own way by building upon their pandemic curations, or whether theaters will begin to act like conglomerates again, showing the same new titles everywhere as a means of establishing a reliable avenue toward generating money and keeping themselves alive.

A version of this article appeared in the Monday, Mar. 15, 2021, e-print edition. Email Quan Zhang at [email protected]