Judd Apatow talks to WSN about grief, heroism and his new film, “The King of Staten Island.” 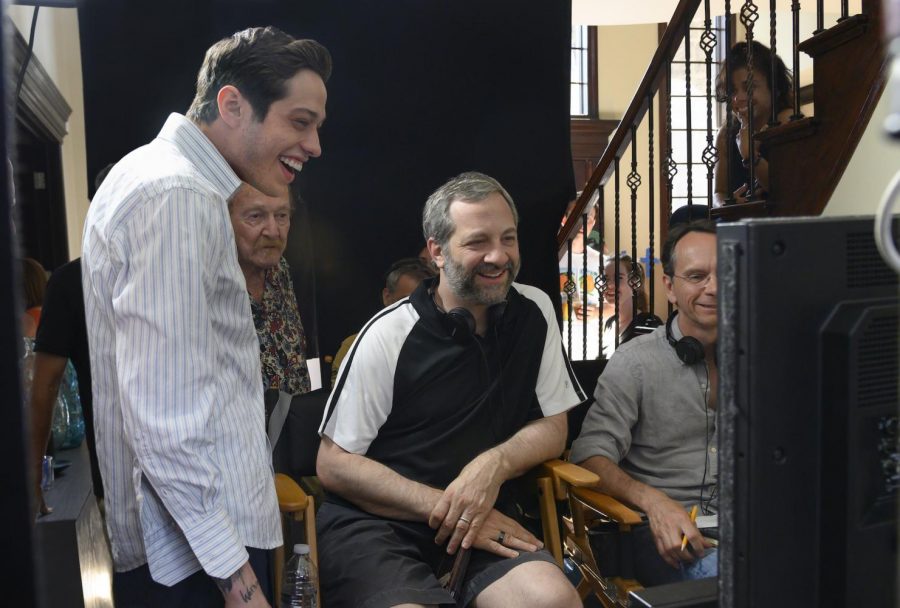 (From left) Pete Davidson and director Judd Apatow with crew members on the set of "The King of Staten Island." (Photo by Kevin Mazur / Courtesy of Universal Pictures)

Judd Apatow has always found himself drawn to stories of underdogs. From working on “Freaks and Geeks,” the TV show about high school misfits, to his directorial debut “The 40-Year-Old Virgin,” he has always found interest in characters who are seemingly stuck in their lives and in need of a push.

“It’s usually somebody that needs something to happen to knock them out of their rut, to force them to grow or evolve in some way,” Apatow said in a recent roundtable interview.

His new film “The King of Staten Island” is another such story that brings an added depth to the typical formula. The film centers around 24-year-old Scott (Pete Davidson) who still lives with his mother, Margie (Marisa Tomei) and spends his days smoking with his friends. He has no set path in life and is still trying to grapple with the grief of his firefighter father’s death from when he was a child. Throughout the film, Scott tries to find his path in life as his mother begins her first serious relationship since his father’s death and his younger sister, Claire (Maude Apatow), excels at college.

Apatow directed the film while also co-writing the screenplay with comedians Davidson and Dave Sirus. This was not the first time the pair had worked on a script together, as they had attempted once before with a concept Apatow had given them. While that script never left the early stages of development, it gave Davidson the opportunity to get into writing and eventually led to him wanting to dig deeper with a new inspiration: his own life.

“As Pete showed a willingness to explore some difficult material, we sat down and improvised and outlined for months,” Apatow said. “And we just talked about his life and also this fictional world we were creating and elements from his real life that could inspire story and characters for this fictional world.”

When creating the film’s world, one of the major characters that emerged was not a person, but a place: Staten Island. Few films have captured the essence of the borough on screen, the most notable being “The First Purge.” Apatow knew when going into the project that capturing Staten Island’s unique vibe was going to be one of his top priorities. He looked to portray it through specific landmarks locals would recognize. Above all, Apatow wanted Staten Island’s residents to feel that their home was being accurately depicted.

“It is its own bubble and its own culture,” Apatow said. “And we felt like if we shoot the entire movie there we’ll get a truthful look at what it feels like to be there.”

While location scouting, the group found it helpful to have Staten Island native Davidson on hand, as he was able to show them specific places he thought would be important to feature.

Once they began production on the film, they went through several rehearsals before finally shooting on Staten Island. From table reads in Los Angeles to rehearsals in New York City, this thoroughness allowed the team to connect with the characters and story on a deeper level. Apatow and Davidson used this as an opportunity to look closer at the script and feel that the proper preparation was done before filming started.

Once on set, in order to draw out authentic reactions and moments, he encouraged playing around with the script. With some scenes, he would film one version scripted and another with improvisation.

“A lot of people’s favorite moments in the movie were created during these loose moments,” Apatow said. “I really found that when you have very talented people around you who have writer’s minds, they add levels and layers that I could never think of alone.”

“The King of Staten Island” explores the idea of heroism and how people can be everyday heroes. Apatow saw this focus to be important, as he said he found few movies are focused on people whose lives are devoted to service. While working on the film, Apatow was able to consult with some firefighters and learn from them. One day, he jokingly asked if the job ever got boring and if it consisted of a lot of rescuing cats out of trees; the response he got from one of the firefighters stuck with him.

“The man said to me, ‘I know that sounds corny, but we just really like helping people,’” Apatow said. “And he was so sincere. It really touched me. And I think it is that every day quality that — to me — was so powerful. This was just the way they chose to live their life.”

The process of creating the film was a very personal experience for Davidson as he lost his father, an FDNY firefighter, on Sep. 11, 2001. While still containing the comedy that has come to be expected from Apatow’s work with a mix of Davidson’s distinct dark humor from “Saturday Night Live,” it also touches on the grief and mental health issues that can come from such a loss.

Apatow had previously worked on projects that dealt with both humor and mental health, such as Chris Gehtard’s “Career Suicide” for HBO and the popular TV show “Girls.” He attributes these experiences to giving him more insight and preparing him to guide Davidson as a co-writer and director with the sensitive material.

“I certainly was interested in Pete and working with him to come up with a story that would let people understand what he’s been through,” Apatow said. “And I felt like if we were able to do that well, a lot of people would relate to it because although this story is about the young person who lost their father who’s a firefighter, we’ve all lost somebody.”

The film takes this story and handles it with both consideration and comedy that will hopefully allow people to start discussions on mental health and loss in a constructive way. Apatow hopes that a film featuring these matters may give those going through similar issues a reassuring outlook and offer them a chance to have a laugh.

“I hope that the movie is helpful in some way, because it is about how somebody gets more support, learns more about themselves and hopefully evolves the next place in their development,” Apatow told WSN.