Review: Latest ‘Amélie’ musical fails to live up to the film 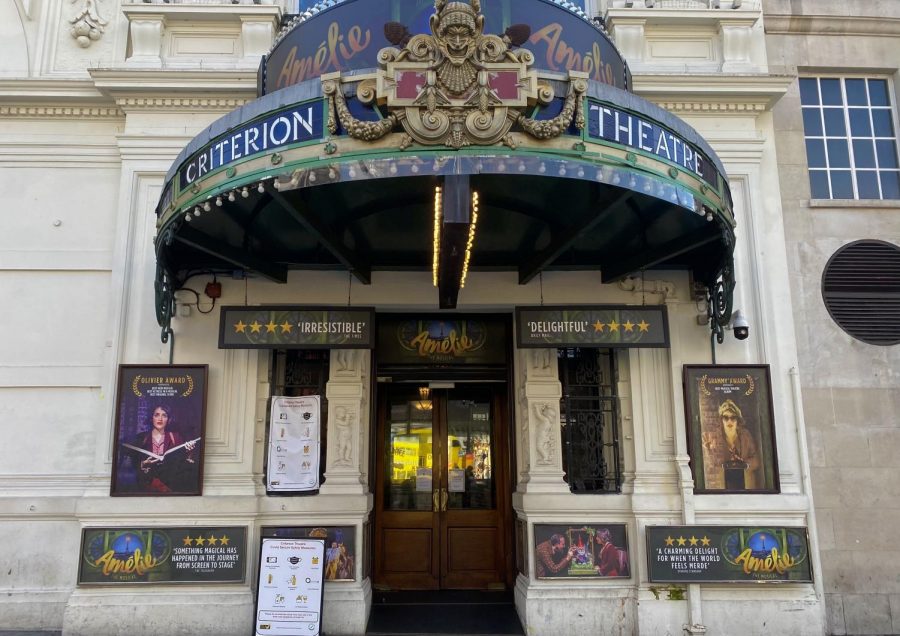 “Amelie” the musical adapted from the 2001 film recently reopened at the Criterion Theater in the West End after a hiatus due to the COVID-19 pandemic. For some, the musical falls short of capturing the essence of the beloved film. (Photo by Saige Gipson)

LONDON — The most recent attempt at a musical-theater adaptation of the 2001 film “Amélie” disappoints. Jean-Pierre Jeunet’s romantic comedy depicted a French woman who, having had a childhood secluded from society, lives alone in Paris and changes people’s lives with her kindness — the musical follows the same plot and characters, but lacks the charm that made the film so beloved.

The first musical adaptation of “Amélie” premiered on Broadway in 2017 but closed shortly after. Critics said the show “lacked flavor” and disliked the score and staging of the musical.

The show reopened in the United Kingdom in 2019 and arrived on the West End in 2021. Writers Daniel Messé, Nathan Tysen and Craig Lucas revised the orchestrations and added new songs. Director Michael Fentiman changed the show’s presentation, making actors play their own instruments for the musical accompaniment. Unfortunately, the show closed shortly after opening due to the COVID-19 pandemic.

After receiving three Laurence Olivier award nominations, the show recently reopened at the Criterion Theater in the West End. The reopening was momentous since it coincided with the 20th anniversary of the release of the original film, a hit in the United Kingdom. It remains the highest-grossing French film in both the United States and the United Kingdom, and received five Academy Awards.

Despite the changes, the musical still lacks the endearing, playful elements and characters that appealed to fans of the film. The musical’s exclusion of these aspects makes it seem as though it were halfheartedly created for the sole purpose of profiting off of the cherished film.

The “Amélie” musical neglects exposition, making it unclear as to why the quirky characters act the way they do. Little time is spent introducing the notoriously rude grocer Collignon (Johnson Willis); in the second act, Collignon is confusingly confronted about his meanness, despite having been portrayed merely as a mild-mannered, slightly grumpy old man.

Similarly, the titular character Amélie (Audrey Brisson) and her love interest Nino (Chris Jared) are given almost no stage time together. This makes the final song of the musical — in which the two characters finally fall in love — perplexing. The musical reveals so little about Amélie and Nino that audiences are left wondering how they could ever relate to each other.

Most musicals depict romance through their songs, but the numbers in “Amélie” fail to fully express characters’ emotions, acting more as filler or mere dialogue. “Sister’s Pickle,” the first song in which Amélie shows interest in Nino, fails to reveal why she likes him or even how she knows him.

While the film version of “Amélie” is deliciously colorful and picturesque, the West End’s production is shockingly dull. The film would lend itself well to a vivid fairytale style like that of “Wicked” or “Peter Pan.” But “Amélie” remains more serious, shying away from the film’s childlike whimsy. The musical’s attempt at sophistication contradicts the film’s heavy emphasis on imagination and curiosity, as well as the importance of imagination to adults.

Amélie’s imagination and curiosity about human nature comes from a childhood in which she was isolated by her parents. In the film, an omniscient narrator reveals Amélie’s daydreams, highlighting the adolescent, creative qualities that have remained with her in adulthood. These qualities spur Amélie’s desire to help the people of Paris. The musical adaptation forgoes the narrator and fails to establish Amélie’s childlike qualities, neglecting themes that are central to the film and the plot of the story.

The production somewhat attempts to recreate the film’s childlike naiveté by using puppets and anthropomorphized figs in a scene where they come to life and terrorize Collignon. But both elements are out of place in the dull, serious scenery of the musical.

Unlike the heartwarming film, the musical leaves audiences feeling empty and distant from its eccentric characters. The musical production follows the same plot as the film, but otherwise maintains neither the style nor emotions of the original. It seems as though the creators only wanted to exploit the film’s popularity. Their adaptation falls short of the beloved original.

A version of this story appeared in the Oct. 18, 2021, e-print edition. Contact Saige Gipson at [email protected]