Painting and politics: A look at Florentine streets

Beyond Florence’s many galleries and museums, political street art serves as a reminder of the city’s longstanding political consciousness and staunch DIY activism. 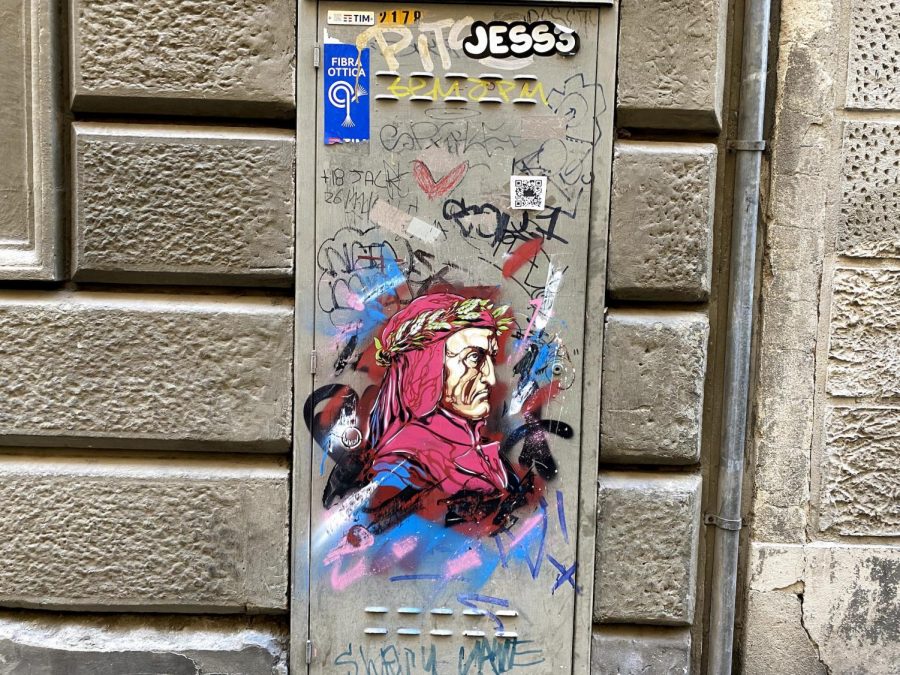 Tourists flock to Florence every year to explore its renowned art galleries. While on the street, they should take note of the street art that dominates the city in Italy. (Photo by Annie Hosch)

FLORENCE, Italy — Every year thousands make the journey to Florence’s great galleries and museums. They crane their necks to admire the magnificent height of the Florence Cathedral, wait in line to marvel at the details of Michelangelo’s “David” and wonder at the beauty of Botticelli’s “Birth of Venus.” Yet along the way, they pass by another medium which embodies some of the most fascinating elements of Florentine society: street art.

Some of the most prominent street artists are found in Florence’s city center. As visitors make their way through the city’s crowded streets, they might pause to notice a piece of whimsical art by Hopnn Yuri, who depicts people on bicycles in crisp reds and whites. Brilliant reds also characterize the art of Carla Bru, who paints iconic red-headed women throughout the city.

One of the most famous Florentine street artists, Blub, is instantly recognizable for his blue backgrounds and aquatic iconography. His work takes classic Renaissance art and reconfigures it into an underwater setting. Yet, MRC MRC is perhaps the most conceptually varied due to his darkly-detailed surrealist-inspired works.

The rich history of Florence is not only evident in its diverse street art scene but in the political spirit of everyday Florentines as well. The city’s reputation within the Italian political landscape is of a liberal city with a strong appreciation for mass demonstrations, situated within the generally left-leaning region of Tuscany. All five quartieri — also known as boroughs — of Florence are governed by the Partito Democratico, Italy’s center-left social democratic party. As tourists from around the world flock to Florence to revel in its iconic Renaissance history, it is tempting for them to forget the political struggle that modern-day Florence is embroiled in.

Here, anger at a corrupt police force and ineffectual government support for the people are evident in the art and graffiti. Some slogans are familiar to American consumers: in English, “Fuck the police” is scrawled across from the Galleria dell’Accademia, and several iterations of “FCK AIR BNB” can be found around the Historic Center.

Spray-painted onto the walls of the Orto Botanico di Firenze is the message “IL CAPITALISMO É BARBARIE” (Capitalism is inhumane). Alongside it, another person has written out “CARCERI 2020 STRAGE DI STATO” (Prisons 2020 massacre of the state). This message commemorates the brutal riots which took place in a Modena prison last March, killing seven prisoners. The Italian government has long been criticized for its inaction and inability to pay attention to these deaths.

In an apt connection between the political climate of Renaissance Florence and modern-day Italy, a large mural of the poet Dante stands just a few blocks away from the Duomo. Author of “The Divina Commedia,” Dante was exiled from the city of Florence in 1302 for his political affiliations amid the shifting power tides of 14th-century Italy. Despite his wish to be invited back to Florence, he remained in exile in Ravenna until his death in 1321. Today, Dante is celebrated all over the city as an icon of Florence. His face is found on countless souvenirs, streets are named after him and there are tributes to his writing and legacy.

Yet in this particular mural, Dante stands in his iconic red robes and laurel wreath, detained by two modern-day police officers. It serves as a reminder of the political infighting that caused the creation of one of the most foundational works of Italian literature. This relationship between politics and the arts has characterized much of Florentine history. In a perfect summary of Florence, slightly beyond this piece, a small painting reads, “Art is the legacy of power.”