Review: ‘Saga’ is one of the most beautiful romance stories of all time

This Valentine’s Day, take a book date with “Saga” and find out what makes it one of the greatest romance epics of all time. 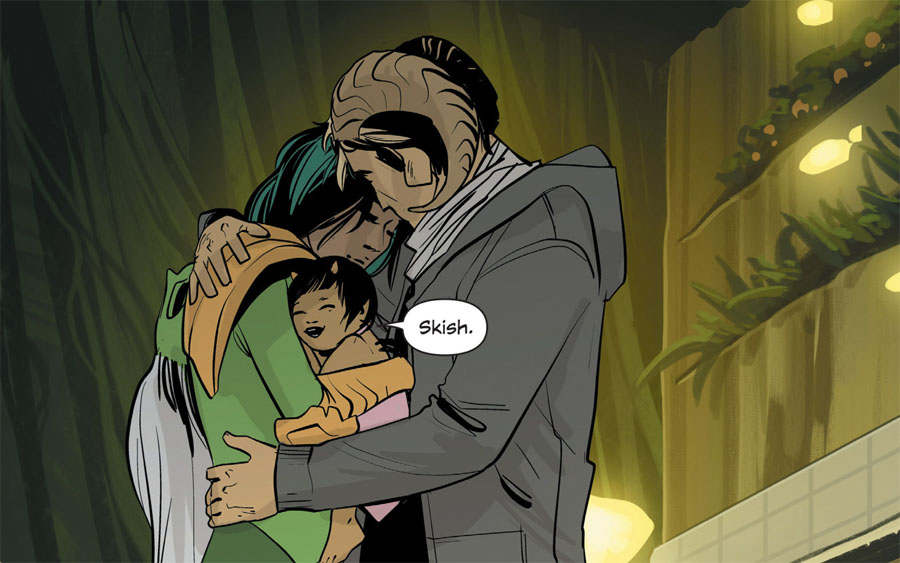 Pretty romantic, am I right? I won’t lie to you, I’m a sucker for romance stories. But I’m talking about the good stuff. That real romance. The kind that breaks your heart. And to me, “Saga” is exactly that story.

Let me introduce you to your Valentine’s Day book date. Image Comics’s “Saga” is an award-winning graphic novel series written by NYU alum Brian K. Vaughan. As you know, we NYU students specialize in complicated romance. On the artistic side of the creative duo is the magnificent Fiona Staples, whose drawings bring life to a world of beautiful characters and settings that any adaptation would find impossible to recreate. The series was on hiatus for three years before its return this January.

“Saga” is an epic sci-fi opera about husband and wife duo Marko and Alana, who are from opposite sides of a galactic war between two extraterrestrial races. Their daughter, Hazel, narrates the story as an adult in the future. Just think “Star Wars,” “Game of Thrones” and “Romeo and Juliet” all in one, except that instead of the couple dying, they have a kid. You decide if that’s better or worse.

The series begins with Marko helping his wife Alana give birth to Hazel. Soon, they are chased down by bounty hunters hired by two warring sides — the planet Landfall versus Landfall’s moon, Wreath — who want this forbidden love child to disappear. Hazel and her family travel across the galaxy, making new friends and enemies along the way. Hazel grows up as the series progresses, and Marko and Alana’s relationship evolves as it undergoes several trials and tribulations. There’s also robot royalty, flying sharks, and crazy sci-fi and magic battles.

What makes “Saga” so romantic? We need look no further than the three main characters. Alana and Marko’s marriage is one of the most consistently heartwarming and heartbreaking fictional relationships. As you learn more about their relationship, you can’t help but fall in love with them. This is only further supported by Hazel’s retrospective narration. As she guides the reader through the plot, she reminisces on the love between her parents and how without each other, they fall apart completely, but together, they become more than they ever were as individuals.

Hazel constantly reiterates that the only reason she gets to grow up is because of the strength and tenacity of her parents’ relationship. It takes two people to make a relationship work, and it’s clear from Hazel that her parents, despite being far from perfect, always put in the effort to fight for their relationship, even when it got difficult. Almost all relationships are messed up in some way, and Alana and Marko’s marriage is no different. But what makes it so romantic is that they always stick with each other, no matter how much it sucks at the moment.

However, the romance of “Saga” wouldn’t be so impactful without the massive galactic war that follows the characters like an unsettling shadow. As much as “Saga” is a love story, it’s also a narrative filled with merciless tragedies. Despite the crazy elements like rocket-tree ships and cyclops erotica authors, the story is a very realistic reflection of our world, even in the most vile and disgusting ways. From drug abuse to child slavery, “Saga” isn’t afraid to depict the most horrible aspects of humanity. With the war infecting everything in “Saga” like an inescapable disease, ordinary things become more vibrant. Love and romance become incredibly scarce.

Additionally, like any realistic depiction of humanity, there’s a lot of sex in “Saga.” However, unlike the use of sex in some other narratives, it has a thematic importance in this comic. With so much death and destruction, one would think that the opposite of war would be peace. But it isn’t. As “Saga” elaborates, it’s something much more intimate and alive: “Because the opposite of war… is fucking.”

“Saga” takes as much as it gives. It’s a beautiful, romantic tragedy that constantly reminds you that in a world filled with oppression and suffering, sometimes the best way to rebel is to find someone you love enough to eat pizza and watch terrible movies with on the couch all day. So, this Valentine’s Day, pick up “Saga” and realize that as much as the story will make you fall apart, it will eventually put you back together into something better than you ever were before.