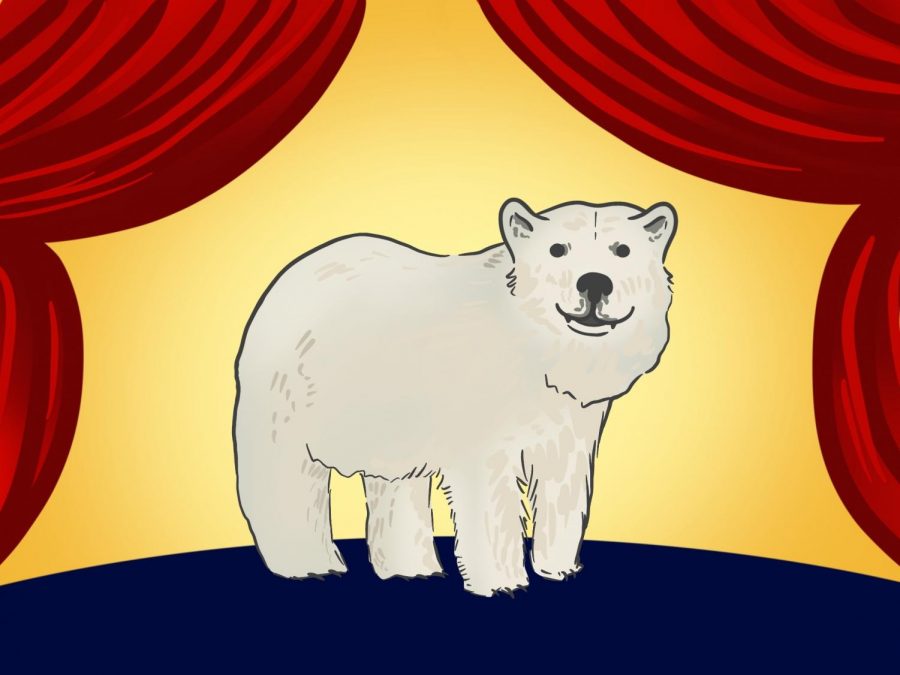 Hovey Burgess is a former circus performer and recently retired NYU circus arts professor. Although he has retired, his life has been anything but boring. (Staff Illustration by Susan Behrends Valenzuela)

Sitting at his permanently reserved table next to the stage at a Lower East Side neo-burlesque house, Hovey Burgess held a glass of milk — his beverage of choice — and fiddled with his rhinestone bow tie, ready to enjoy music, burlesque and cake in celebration of his 81st birthday.

Burgess, a former circus performer and recently retired Tisch circus arts professor, has performed in over 10 circuses over his half-century-long career after teaching himself to juggle and ride a unicycle, though he had intended to join as a veterinarian. Among his performance credits is Circus Flora, which is directed by one of his former NYU students. This past fall was the first season he’s missed in 30 years, due to medical issues he calls his “geriatric baggage.”

A couple weeks after I was introduced to Burgess in the Slipper Room, I lunched with him in the Lower East Side. He sat down in a Circus Flora bomber jacket and ordered two apple tarts with cinnamon ice cream and a glass of milk. Between bites, he told me that he joined the circus at 17 years old while growing up in Dover, New Jersey.

He was inspired to join the circus by the New Jersey Hunt Bros. Circus, where he started in 1962. When he saw them perform with a neighbor, he realized what he wanted to do.

“I said [to the neighbor], ‘I’d kind of like to join a circus for a year,’ Burgess said. “He said, ‘You can’t do that because you’ll get sawdust in your blood, you won’t be able to leave.’ I didn’t think he was right about that, but he was.”

After teaching at five undergraduate colleges in seven years, Burgess found it difficult to balance university life and circus performance.

Burgess worked at NYU as a professor of circus for over 51 years and 100 semesters between 1966 and 2017. I asked him how his students had changed throughout his years of teaching.

“When you teach people, their motivation is the ingredient that is the hardest to come by,” Burgess said. “Because I was working with acting students, some had motivation and some did not. Some were amazing, others thought that being an actor was all in their head, and that it didn’t require any physical grief at all. The students that did well with circus tended to succeed in the outside professional world, and the ones that didn’t did not seem to show up in the professional world.”
If you can’t be original, copy from someone who’s really good — but wait until they’re dead.   —Hovey Burgess, former circus professor
Since retirement, Burgess says he still has one student left — himself.

“I’m teaching myself foot juggling,” Burgess said. “When I listen to myself as a teacher it goes very well, which I don’t always do.”

He does his foot juggling in a polar bear suit in preparation for an upcoming movie about a polar bear who teaches himself to foot juggle in the wild. He practices on the upstairs level of the New York City duplex he bought in the early ’70s.

As we walked to Burgess’s apartment on First Avenue, he told me he had performed with a live polar bear in his early days of circus career, kindling a love for the animal that persists to this day. As we stepped through the doorway, I was met with polar bears of every shape and size, large plush stuffed animals and sculptures of quartzite and marble. Two framed polar bear adoption certificates hung on the wall atop a bookshelf with a variety of books on polar bears like “The Man who loved a Polar Bear and other Psychotherapist’s Tales” and “Fuzzy Little Polar Bear.”

He’s taken rather marvelous trips internationally with his polar bear training assistant, burlesque starlet Lil’ Miss Lixx — they travelled to the Arctic to look for polar bears and to Paris to see the Cirque d’Hiver, where “Trapeze,” the film that inspired him to join the circus, was shot.

Burgess has never slowed down, even in retirement. His life after leaving NYU has been anything but dull, so I asked him what advice he would give to students arriving here.

“Take care of yourself, pay attention to detail, and be original,” Burgess said. “And if you can’t be original, copy from someone who’s really good — but wait until they’re dead.”

A version of this story appeared in the Nov. 8, 2021, e-print issue. Contact Clara Scholl at [email protected]