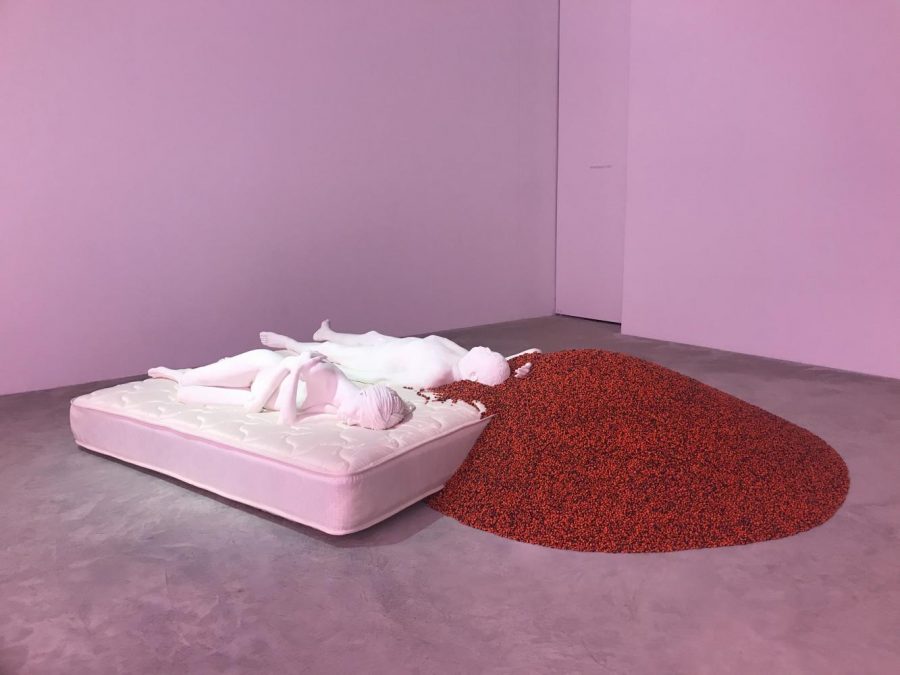 Ai Weiwei’s piece, Two Figures, is a life-size work of a plaster-cast man and wife lying on a mattress, with a pile of red seeds surrounding the man’s head. This was used as a reference to the Tang Dynasty poem, Love Seeds, which inspired the title of the exhibit. (Photo by Alexandra Bentzien)

Nestled in a sidestreet of Brooklyn’s Greenpoint neighborhood is the sleek and modern Faurschou Foundation, an art gallery currently home to the group exhibition The Red Bean Grows in the South, presenting political and cultural works by renowned contemporary international artists including Ai Weiwei, Yoko Ono, Anselm Kiefer, Robert Rauschenberg and Cai Guo-Qiang, among others.

The exhibition is easy to take in, physically: sectioned off into six spaces, the gallery is the perfect size and very manageable to navigate, each room displaying only a few art works. However, the concurrent themes of violence and globalization as well as the intimacy with which they are experienced is intense. At times it can be overwhelming to engage with due to the grand scale and subsequent immersive quality of many of the pieces.

The centerpiece of the first room is Cai Guo-Qiang’s “A Boat with Dreams,” a lifesize production of a wooden boat full of glowing red paper lanterns that hangs from the ceiling.  The boat is a metaphor for journey and connection, between past histories and current events and between cultures. The room adjacent is a video installation by Richard Mosse, a giant triptych which presents the experience refugees have travelling by ship and arriving on foreign shores. The images themselves are fascinating, presented in slow-motion and almost three-dimensional in grayscale black-and-white thermal camera.

The movement of the water and the almost translucent bodies are mesmerizing: one frequently gets the feeling of becoming a part of the art itself interacting with the variety of works. Ai Weiwei’s piece, “Two Figures,” is a life-size plaster-cast man and wife lying on a mattress, with a pile of red seeds surrounding the man’s head, a reference to the Tang Dynasty poem, “Love Seeds,” which inspired the title of the exhibit.

The poem’s motif of longing and yearning is echoed in different ways throughout the gallery. Yoko Ono’s “Happy Xmas” is a cry for peace, sung over a video presenting the horrific human cost and trauma of war, with visceral images specifically highlighting the gruesome effects of conflict on children. On the other side of the wall stands Christian Lemmerz’s “The Last God,” another life-size statue of white marble; it resembles Jesus with outstretched, beckoning hands, though its effect is less than welcoming, at once intriguing and unsettling as it is buried under a highly realistic carved sheet.

It is this acute realism that urges one not to look away, despite a nagging feeling of disturbance and uncertainty which underscores much of the art. That the art is so close to life, in its physical look as well as in its political and cultural commentary, is precisely what makes it so compelling. The best demonstration of this is Edward and Nancy Redding Kienholz’s “The Ozymandias Parade,” a massive mixed media tableau which presents replicas of guns and grenades on top of stacks of dollar bills, a leader upside down on a horse, a torn American flag and a skeleton in uniform. The installation is filled with symbolism demanding a reaction, proving that the exhibit is not one to walk through and quickly take pictures in. The gallery is not merely a trendy new spot, but an experience which encourages reflection and provides the space to do so.

The gallery opened to the public at the end of last year and is the latest exhibition space established by the Faurschou Foundation, headed by Danish collector Jens Faurschou, whose goal, according to the foundation’s website, is to cultivate cultural exchange through carefully curated exhibits highlighting works by artists from across the globe.  The current assembly of works, either acquired through auction or through direct communication with the artists, showcases an attention to acknowledging art both as a physical product to be consumed and as a serious form of creation with the power to elicit an emotional response and facilitate greater awareness for the effects of global crises.

A version of this article appears in the Monday, March 9 2020, print edition. Email Alexandra Bentzien at [email protected]