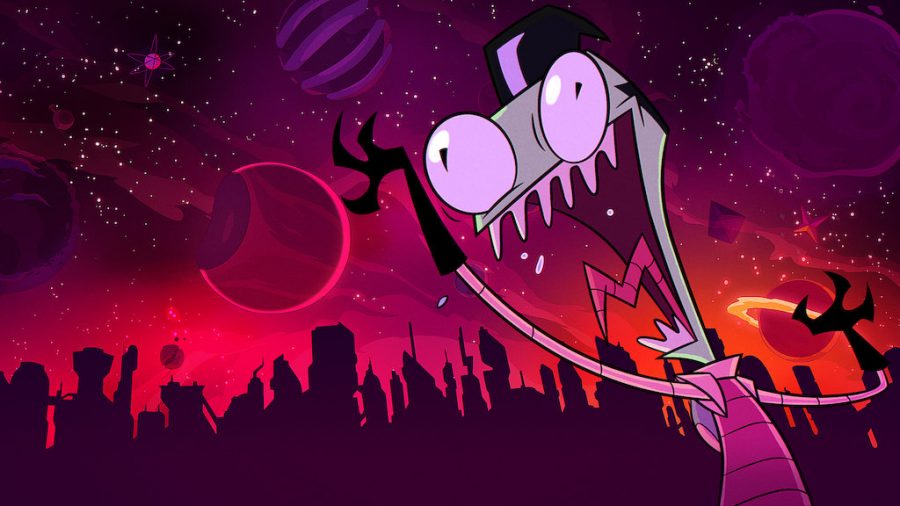 Still from Invader Zim: Enter the Florpus. (Photo via Netflix)

The year is 2000. Nickelodeon has redefined children’s media with the likes of “Ren and Stimpy”; crass humor and gratuitous violence abound. American mothers shudder in the wake of the satanic threat posed by Pokémania. Into this world, Jhonen Vasquez unleashes “Invader Zim,” its eponymous, bug-eyed, little-green-man endeavoring to subjugate humanity and harvest organs from schoolchildren. During its mere 27-episode run, the show’s ratings were in perpetual decline, but its razor-sharp edge reaped a dedicated fan base. Thirteen years after Zim’s last television appearance, Netflix’s “Enter the Florpus” delivers a compelling conclusion to the beloved cult classic.

“Invader Zim: Enter the Florpus” continues the essential premise of the cartoon. Zim (Richard Horvitz) belongs to the Irken race, whose empire stretches across the Universe. Despised by his brethren for his idiocy and overzealousness, Zim is sent by co-emperors The Almighty Tallest (Wally Wingert and Kevin McDonald) on a secret mission to a far-off planet they call “Urth.” There, he and his malfunctioning robot servant GIR (Rosearik Rikki Simons) earnestly prepare humanity for domination by the Irken Armada. Fortunately, their efforts are thwarted by 12-year-old paranormal nut Dib (Andy Berman) and his cruelly apathetic sister, Gaz (Melissa Fahn), the children of the brilliant but neglectful Professor Membrane (Rodger Bumpass).

“Enter the Florpus” answers the burning question, what if the alien invader wins?

“Invader Zim” drew much of its cult following from its jarring, off-the-wall humor, and the film recreates that authenticity without repeating old gags. Finally aware that his people are never coming out to the galactic sticks — but unaware that it’s because they bitterly hate him — Zim decides to take Urth to them. It’s a scheme only he could devise. Zim viciously satirizes to such a degree that it is very much at home in today’s comedy world, hyper-aware of society’s ever-increasing polarization. The Irken invader easily hypnotizes humanity with a smartphone-esque product, mindless lies and a song about chicken and rice. At one point he muses, “All this time trying to subjugate the humans, and all I had to do was charge them for it!” GIR’s wacky exclamations on tacos and peanuts epitomize early 2000s “randomness” but they remain as endearing as they were all those years ago.

Improving upon the sharp-edged, grunge aesthetic of the original cartoon, “Enter the Florpus” amps up the animation and incorporates its own style. Colors are vibrant while character animation is snappy and frenetically expressive. The TV-movie budget goes a long way in affording multiple styles and all of the metallic, spider-legged, sci-fi eye candy of its predecessor.

“Zim” initiates will draw most of their enjoyment from the zany action, but veterans will be pleasantly surprised by the neat and cathartic end that “Enter the Florpus” provides. In contrast to “Hey Arnold!” and “Rocko’s Modern Life” — both of which recently received movie follow-ups — “Invader Zim” struggled against network execs, and Vasquez was largely unable to tell the story he truly wanted during its troubled run. “Enter the Florpus,” for all the cynicism of its world, righteously doles out comeuppances and affectionately allows Dib and Zim a face-off worthy of their shared delusions of grandeur.

A version of this article appears in the Sunday, Aug. 25, 2019, print edition. Email Fareid El Gafy at [email protected]