Making the most of Milan Fashion Week

Milan Fashion Week is one of the most hyped events in Italy. This NYU Florence student went to see it for herself. 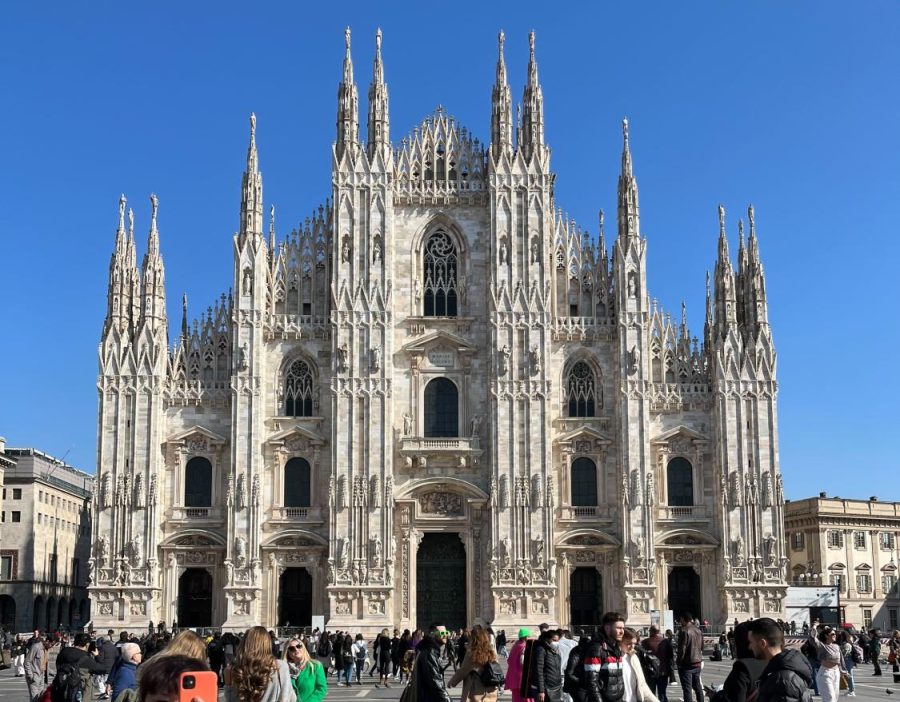 FLORENCE, Italy — When I first decided to go to Milan Fashion Week last month, I didn’t realize how nervous I would be. The night before I left, I packed and repacked. My apartment became lost in piles of clothes. Every so often, I walked out of my room to ask my roommates if my outfit looked stupid — though it often did, they didn’t tell me that. I was set on elevating my fashion style to Milan standards overnight. It was an unattainable goal, but it helped me prepare mentally, if not aesthetically.

When I arrived in Milan, I heard rumors about celebrity sightings that did nothing to ease my apprehension but did immerse me in the ambient excitement. Groups of people were singing “Umbrella,” hoping to catch a glimpse of Rihanna outside the Four Seasons. I would be lying if I said I wasn’t briefly one of them, or that I wasn’t deeply troubled when I learned she showed up 10 minutes after I decided to leave. I was equally crushed when I witnessed people taking pictures of Anne Hathaway while I was in an Uber going back to the train station. In my mind, fashion week meant that star-studded sidewalks were a guaranteed sight. Admittedly, I see how that was a flawed expectation — but it was part of the Milan Fashion Week dream.

Although the celebrity-sighting part of my dream was diminished, my hopes of enjoying fashion week were still alive. I’m very far from a fashion guru, but I am on the cusp of interest and passion. In all honesty, the whole experience was wholly intimidating. It felt like the fashion shows extended into the streets, from the questionable pattern pairings to head-to-toe designer outfits.

When I walked through the Galleria Vittorio Emanuele II — the most intricate shopping mall I have ever seen — I saw a whirlwind of different artistic expressions, the type of expression that cannot be limited by language barriers. You could showcase who you are exclusively through your clothes. Yes, some of the outfits seemed impractical, but that was the whole point. For one week, you were free to be daring and impractical. My version of an impractical fashion choice was more tame and misguided: I wore platform Dr. Martens for all three days, 12 hours a day, walking almost 10 miles a day. I’m sure you can imagine my regret.

The event was amazing, but it was crowded — not that I was not surprised, but it changed my mental image of what “crowded” really looks like. I really wasn’t prepared for how much of my weekend would be spent waiting in lines. I was not ready to brave the line that circled the Duomo di Milano almost three times. During the constant cycle of walking, waiting and standing, I was grateful that my Airbnb was right by the Duomo.

Milan Fashion Week was an extreme version of tourist season, which also meant dodging numerous tourist traps along the way, intentionally or not. I couldn’t get a ticket to see Leonardo da Vinci’s “The Last Supper,” for example, and I realized that I had been a little unprepared. Then again, the good parts of the trip almost made up for the missed experiences. The most memorable adventures of this entire study abroad experience have been the mundane moments made exciting by the fact that I am in a new city. I felt like I best appreciated Milan when I wasn’t bound by any expectations, just walking around eating gelato with my friends.

I finally understood the excitement of it all. I thought that it would be a superficial series of events, but instead, it was a culmination of people expressing themselves in a seemingly unconventional way. To some extent, it felt like New York City, especially at the Starbucks — although it did feel wrong to be getting Starbucks in Italy.

At Milan Fashion Week, you could do anything and be anyone and no one would look twice. I don’t know if I would go again, but I think that a spectacle like this one is something everyone should experience at least once. It will give you a new perspective on what it means to express yourself and maybe even a new way to creatively showcase your identity. For me, Milan fleetingly relieved my homesickness, and perhaps even encouraged a new passion for fashion.