The Bulgarian holiday signifies the coming of springtime. 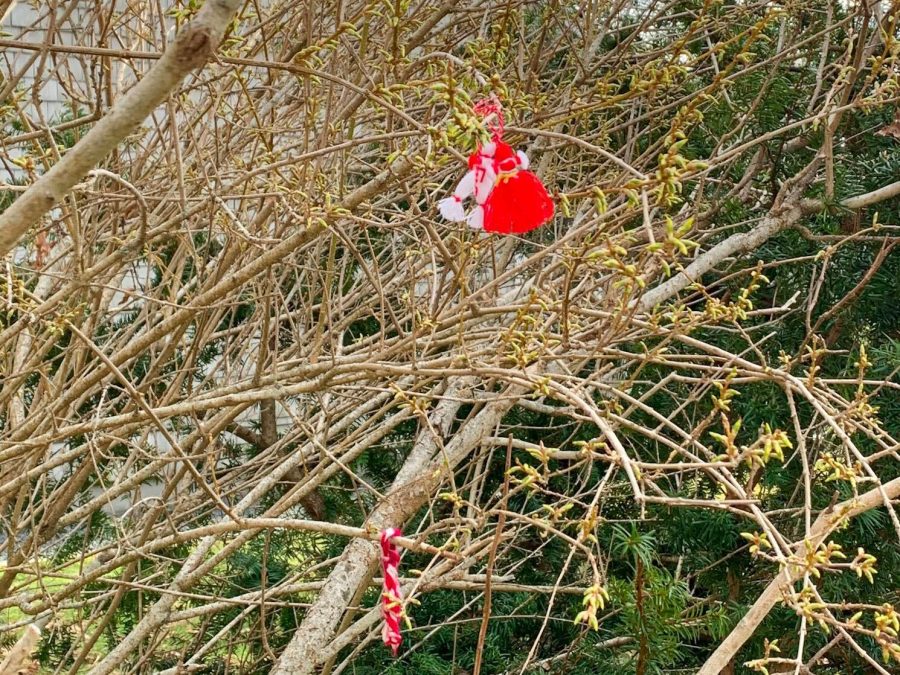 Martenitsi are Bulgarian decorations made of red and white string. (Photo by Alexander Venkov, courtesy of Jules Roscoe)

March brings a lot of things. We watch the snow give way to budding tree branches, get buffeted by the cold wind tunnels between tall buildings, and, this year, even got somewhat of a spring break. It’s the month that bridges the gap between winter and spring, and it’s so temperamental that 70-degree weather turns to hail in a matter of hours. Bulgarian culture has a name for that: Baba Marta.

Literally “Grandmother March,” Baba Marta is the personification of the month that signifies the beginning of springtime. We celebrate her arrival on March 1 with the greeting, “Chestita Baba Marta,” which essentially means “Happy March!” We keep honoring her until the end of the month. Her story originated from the Balkan pagan tradition and it comes in many variations.

My mother Evelina, who was born in Sofia, the Bulgarian capital, told me this version when I was 6 years old. Baba Marta is an old grouchy woman who lives up in the Rhodope Mountains. Her older brothers, Big Sechko and Little Sechko — January and February, respectively — are always playing tricks on her and getting on her nerves. Finally, she gets so fed up with them that on March 1, she whirls up a big storm and blows them away. By the end of the month, though, she has calmed down, and it’s time for spring to begin in earnest.

My mother emigrated to the United States when she was in her early 20s, with only one suitcase and no connections to anybody here. Coincidentally, she settled on Cape Cod, Massachusetts, a place with a surprisingly high concentration of Bulgarian people. Though I’ve never been to Bulgaria, I grew up immersed in the culture. I remember being particularly confused when my mother gave me my first martenitsa.

“It’s for luck for the new year,” she explained as she tied it around my wrist. “Chestita Baba Marta!”

Martenitsi — or martenichki, when you want to say they’re cute — are decorations made of red and white string, either in the form of a bracelet or two little dolls. We gift them to each other on the first of the month, and if they’re bracelets, we wear them until April. My mother never told me why we chose red and white, but I found out later that red is for fertility and white is for strength.

There are variations of what you can do with martenitsa. In my family, we hang them on the first budding trees at the end of the month. You can also choose to put them under a rock for a day. When you take them out, you can interpret them to see how your year will go. Don’t ask how — just know that Bulgarian people tend to be very superstitious.

My mother taught me a variation of that tradition that I have yet to hear anywhere else. She even managed to get my very stubborn, very Irish father to do it. At the beginning of the month, we choose a date. However that date goes for us — be it good news, the weather, how you choose to dress — is how the rest of the year will go for us. This year, I chose the 17th. I went to Party City that day to get a balloon, but the cashier refused to get it for me. I’m still working on interpreting that one.

My mother clung very closely to her Bulgarian roots, but not everyone celebrates to the same extent. Kristian Nikolov, a Tandon senior studying computer science and engineering, doesn’t celebrate it much.

“We pass around martenitsi and I give a couple as gifts to my roommates,” Nikolov said. “I do dinner with my grandparents, so we celebrate everything together like a mishmash,” a type of Bulgarian food.

Like Nikolov, most of my Baba Marta experience centers around friends and family. So last year, my first year away at college, was strange. It was the first year my mother didn’t give me a martenitsa.

We had no spring break that year, and I didn’t want to risk traveling over the weekend and getting my parents sick. I had never celebrated it without them, and I had nowhere to get my martenitsa. In Bulgarian culture, you are never supposed to gift a martenitsa to yourself. But I figured the circumstances would allow for an exception. I bought some red and white spools of thread at Blick and braided them into a little string bracelet, which I tied on my own wrist. I hand-made — or tried to, it proved very difficult — two tassels, one red and one white, and hung them on my wall with a thumb tack. I called my mother. She thought it was adorable.

The first day of April, I pulled the thumb tack out of my wall and did my best to smooth the paint over the hole. I clipped the martenitsa from my wrist, and walked out to Union Square Park, where I hung both martenitsi from a little budding tree next to the big lawn. They hung there for about a week before they disappeared.

College took over this year. I had no time to make martenitsi like I did before. Instead, I tied a simple red string around my wrist, and kept a red-and-white scrunchie in my hair every day. This year, I felt more adjusted to being away from home, and I accepted the improvised martenitsi more easily.

I decided to tell my partner about the tradition. He seemed skeptical at first, but he chose March 11, the day of his organic chemistry exam. “However this goes for me will actually determine my year,” he said. His exam, he told me, went smoothly, he had his favorite meal for dinner, and he finally got a chance to relax that evening after two grueling weeks of preparation.

To my knowledge, New York City is not teeming with Bulgarians. But there are hints of us scattered throughout the leaves.

“If you go to Central Park,” Nikolov said, “you can find a few martenitsi tied there, on a blooming cherry blossom tree.”