Fashion Week commenced with New York Men’s Day. Budding brands were invited to showcase their Fall/Winter 2022 collections, and the next generation of designers shared their interpretations of modern menswear. 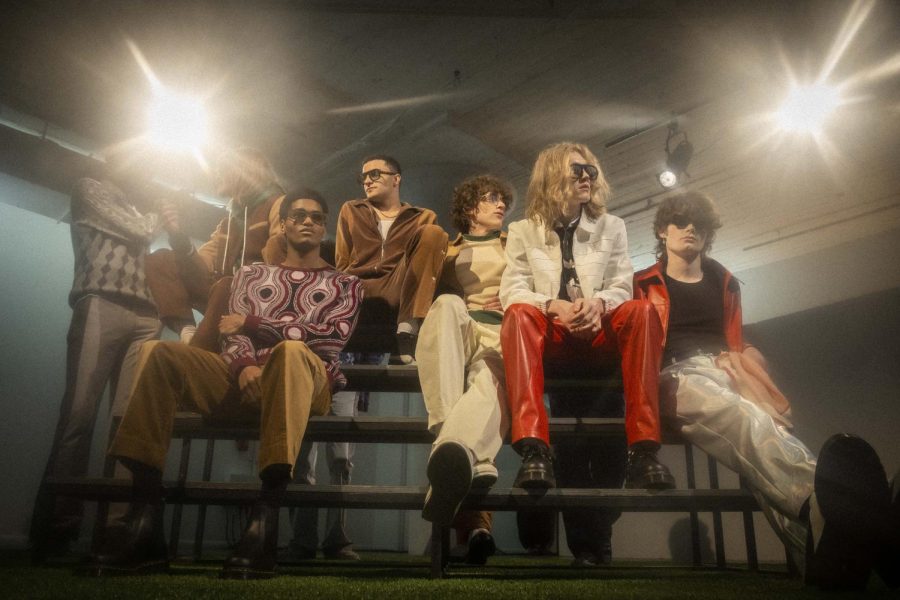 From the heights of a Hudson Yards high-rise, the New York Men’s Day afternoon showing commenced against the backdrop of an uncharacteristically bright February day. The showcase imparted the same hopeful energy as the late afternoon weather.

Nicholas Raefski
Upon entry into the showroom, designer Nicholas Raefski whisked the observer away from the pomp and circumstance of Fashion Week and into a more carefree setting from a bygone era. The brand’s Fall/Winter 2022 showcase, called “Meet Me By The Bleachers,” presented a scene that wouldn’t feel out of place in Paul Thomas Anderson’s “Licorice Pizza.”

Lounging on bleachers, models adorned in a variety of ‘70s-inspired styles exuded a youthful energy that matched the clothing. Soothing pastel shades, funky patterns and confident color blocking were displayed under the warm glow of overhead lights. AstroTurf carpeting completed the image of a Friday night in the suburbs of ‘70s-era Southern California.

Amidst a revival of 1970s aesthetics in contemporary fashion, this collection represents the result of Raefski’s exploration into the human penchant for nostalgia. Compelling storytelling is a cornerstone of the young designer’s fashion philosophy. By weaving self-reflection into the collection, Raefski delivered his narrative with a sense of authenticity.

The brand’s sophomore collection is a modern attempt at recreating the era’s fashion aesthetics and stylings, and succeeds in delivering the glitz and glamor of the decade with modern functionality. While the end result may lack the substance its designer was aiming for, the fun and flamboyance it exudes make it a respectable entry in the brand’s catalog.

The Academy New York
The Academy New York curated a minimalist atmosphere for the unveiling of its inaugural menswear collection. Tall windows bathed the white walls of the showroom in the glow of the evening sun. Views of private helicopters descending over the shimmering Hudson River reinforced the sense of luxury the brand seeks to project.

Forgoing live models, the brand brought its collection out for visitors to directly interact with, fostering a more intimate showcase experience. Each piece reflected quality craftsmanship — a central focus for the brand. For FW22, designer Swaim Hutson reimagined tailor-made menswear, finding inspiration in the sophisticated yet audacious ensembles from the portrait photography of Katsumi Watanabe. The collection aims to emulate iconic menswear designer Ray Petri’s core fashion philosophy of challenging tradition to create a new classic.

Hutson’s arrangements melded a diverse range of winter wear stylings with classic dresswear, incorporating a broad swath of the color palette. The designs eschew subtlety with their ornate design and unique silhouettes. A highlight of the collection was a matching three-piece suit in a floral pattern. The embroidery, present even on the buttons, stood out on the muted dark green base. The garment created the illusion of botanical body armor, with the wearer veiled in overgrown vegetation.

Reminiscent of luxury streetwear brands including Aimé Leon Dore and Kith, the Academy New York’s official foray into menswear succeeded in breathing life into timeless tailored styles, thereby transcending tradition. However, the brand has a ways to go in differentiating itself from its aforementioned contemporaries. Successive collections should see the brand continuing to hone its own unique image and signature aesthetics.

The collection, entitled “The Misdeeds of Dashwood,” taps into Mikhail’s childhood obsession with religion, mythology and history. Atelier Cillian’s first season was primarily inspired by the mysterious Hellfire Club of 18th-century Britain. Each ensemble emanated the ominous aura of the secret society that remains shrouded in rumor to this day. There’s a jovial yet sinister tone that permeates the entire collection.

However, Atelier Cillian’s debut collection failed to achieve the sophistication of the haute couture design it sought to emulate. It was less Christian Dior and more a museum exhibit of Johnny Depp’s most iconic roles.

Clara Son
A booming house beat thumped in the background, adding to the sterility of the showroom — a common characteristic of futuristic fashion. Minimalism is central to designer Clara Son’s work. The simplicity of the showroom’s composition reflected that fact. Models were positioned in front of a snowy background and faced a curious audience. The physical and symbolic distance between both groups evoked the image of a theatrical stage upon which the clothing came to life.

The presentation, entitled Exuvia Capsule, embodied a post-apocalyptic quality akin to Kanye West’s Yeezy brand. Inspired by the peculiar anatomy of insects, Son presented otherwordly silhouettes that were uniform in color. Yet, beyond the rugged exoskeleton lay a hidden sensitivity.

Elements from the uniform and workwear of various professions were visible in the collection. The pieces invoked the spirit of the fighter pilots, firefighters and fishermen — all careers that embody the traditional perceptions of masculinity. Yet, Son challenged these preconceptions with emotionally charged choreography. The models’ detached demeanor dissipated as they advanced into the audience and performed a ballet sequence that captured the vulnerability of masculinity.