Opinion: NYU should stop idolizing the Greeks and Romans

NYU propagates harmful attitudes about the type of history that matters with an overall lack of focus on the ancient world outside of the Classics. 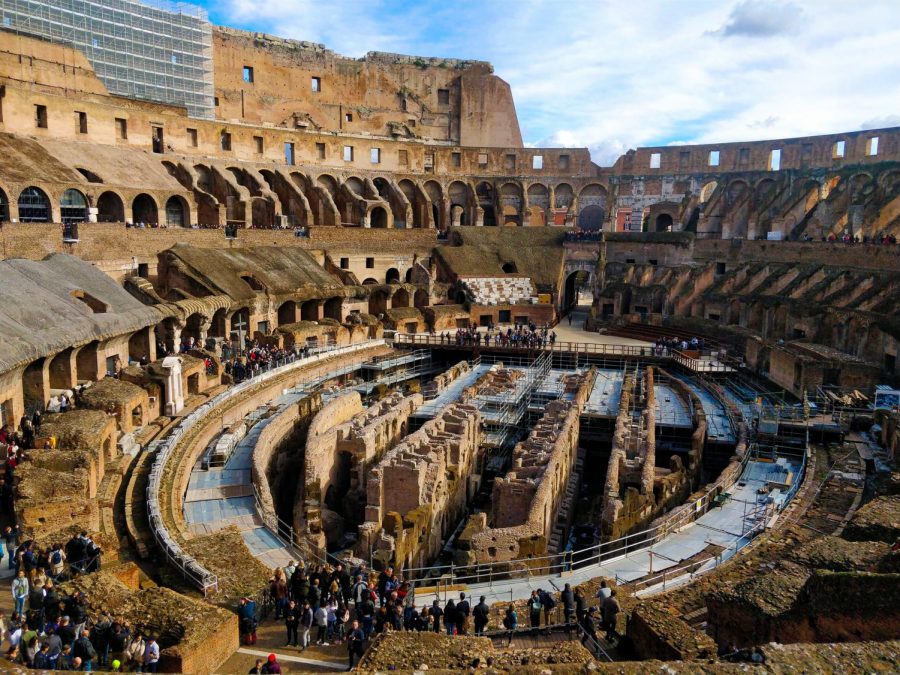 The inside of the Colosseum, which was the largest amphitheater in the Ancient Roman world. NYU’s course syllabi, and Western academia in general, neglect the study of non-white cultures in favor of Roman and Greek art and history. (Staff Photo by Arnav Binaykia)

On a Wednesday in October, I attended an introductory anthropology class in the Cantor Film Center to hear a lecture on the history of evolutionary theory. Students typed notes as the professor began his discussion with a philosophical explanation proposed by Plato. He described the European ideas that followed, eventually ending up at Darwinian natural selection. But if Plato’s divine forms have been brought up, what about other early theories? Why are we exclusively taught about Greek theory? Ibn Khaldun, a 14th-century Arabic scholar, proposed a theory not far off from our current understanding — it even cites a sort of pomegranate soup beginning and the “ingenious, gradual” progression of evolution. But that knowledge has been ignored in many history classes because Ibn Khaldun wasn’t Greek. Or, more directly, Ibn Khaldun wasn’t European.

Western academia preserves an inherited bias toward the works of Ancient Greeks and Romans. Well-raised — that is, wealthy, white — young men were encouraged to read Latin and Greek literature in 17th-century western Europe. Greek naturalism as an art style was upheld as the pinnacle of human achievement. Government buildings are still in the neoclassical style, with former President Donald Trump making an effort to formalize this practice. In order to fully appreciate everything the ancient world encompasses, we need to discard the idea that Greece is the best the world has to offer. At NYU, this ancient Greek supremacy persists in academia and class curricula. The university should put an end to this.

At NYU, courses claiming to cover ancient history suspiciously focus their attention on Greek and Roman events. The philosophy department, in turn, offers a “History of Philosophy” sequence with predominantly Ancient Greek and European ideas — yet there appear to be no courses specifically on writers like Confucius, Lao Tzu or Nagarjuna. Is it because these writers are somehow worse than the white ones focused on in NYU’s courses? Obviously not. The reason lies in Western colonialism.

Kathryn Howley, a professor of Ancient African art and archaeology at NYU’s Institute of Fine Arts, articulated the positive feedback loop that British colonialism has created.

British mercenaries founded the field because they had a habit of poking around in the countryside while off duty and stumbled upon mountains of archaeological evidence. But with the ideas of the Renaissance, only Greek discoveries garnered the attention of intellectuals. There’s also the matter of funding. Only wealthier institutions, predominantly concentrated in Europe and North America, have the money to afford these archaeological digs, and white people tend to study white historical figures — so, again, Greece comes to the forefront.

NYU brands itself as a global university, which should, in theory, extend to its perception and teaching of ancient cultures. It does, but only in enthusiasm. When Dr. Howley presents her research, people are often unaware that we have anything from ancient Africa.

“You tell people that we have this really incredible 9,000-year-old sculpture from Nigeria, and they go, ‘What?! I didn’t know we had anything that old!’ Howley said. “They’re very enthusiastic to learn.”

However, NYU’s enthusiasm does not follow through in practice. Archaeology does not have its own undergraduate department, so it is only available for study through four tracks: Classical Civilization and Anthropology, Classics and Art History, Anthropology or an Ancient Studies minor. Out of these four, only Anthropology and the Ancient Studies minor are non-classic options that do not almost exclusively focus on Greek and Roman history. Two of the four majors that allow one to concentrate in archaeology also come with an emphasis on Greece and Rome. How is it that all of ancient history is lumped together, except for the Classics?

Glorifying ancient Greek history also harms the contemporary Greek legacy. Currently, Greece hangs in the shadow of its absurdly popular history, thirsting for recognition that captures more than its past.

“When people think of Greece, they think of Ancient Greece. What about now?” Liana Theodoratou, professor of Hellenic studies said.

The supremacy of Ancient Greece in academia is an inherited extension of racist archaeological ideals. NYU claims to care deeply about diversity and equal representation of ideas, and yet here we are, unknowingly perpetuating a thousand-year-old exclusion of non-European thoughts in our academics. As students, we deserve a more well-rounded historical education that’s not just focused on two ancient cultures. There’s more out there than Plato.