Asian and Pacific Islander students say that NYU’s verbal support is meaningless without action, and they warn that their performativity problem will only grow worse. This article is the fourth in Sabrina Choudhary’s series documenting API students’ experiences with race at NYU. 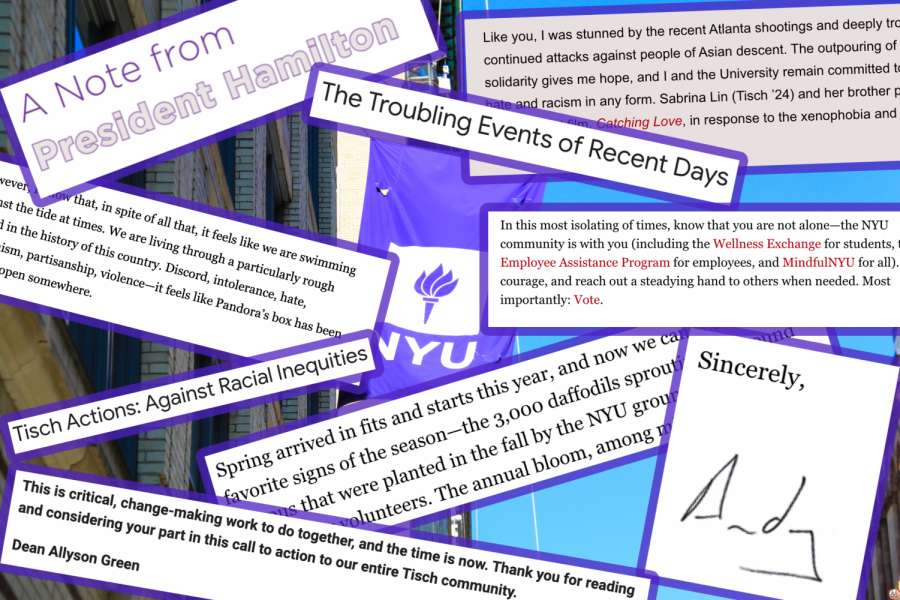 API students are pressing the University for any sign of results concerning its promises to the Asian community and even its past promises to the Black community. NYU has yet to respond with anything aside from performative comments. (Staff Illustration by Alexandra Chan)

I interviewed 12 Asian and Pacific Islander students about their experiences with race at NYU. Four of them used the word “performative” to describe NYU’s actions during the swell of pandemic-related hate. They argued that NYU’s sympathy is insufficient without action, particularly criticizing President Hamilton’s emails to the NYU community.

“NYU, I think, needs to stop f-cking playing around,” Gallatin senior and Native Hawaiian Waikala Asuncion said. “The performative sh-t is only going to go so far.”

“Like you, I was stunned by the recent Atlanta shootings and deeply troubled by continued attacks against people of Asian descent,” Hamilton wrote in his note to students on April 1. “The outpouring of support and solidarity gives me hope, and I and the University remain committed to stand against hate and racism in any form.”

This is the only explicit statement of solidarity with API students that Hamilton has made via email regarding the rise of hate, and it excludes Pacific Islanders. His other three emails condemning “hate” since 2018 denounce bigotry as a general pattern in the United States over the past few years without specifying targeted groups.

API students are not satisfied.

Gallatin junior Carlisle Wang, who is Chinese American, says that he does not believe NYU supports its students of color outside of written statements.

“God, sending out a mass email isn’t exactly going to stop your students from facing discrimination in the streets,” they said.

“I don’t believe in hollow statements from big universities or people in power,” Caroline Younglove, a Tisch and CAS junior who is Filipina and white, added “That doesn’t really help the situation.”

Sinéad Anae is a Pacific Islander senior in Steinhardt who believes that the emails are appreciated but can’t stand on their own.

“Speaking to your students and showing your support is good, and it does create a sense of safety, I think, among students,” she said. “However, when it isn’t matched with some sort of quantifiable action, or community outreach, or efforts of using [NYU’s] money and privilege and brand name against these bigger issues, I think that it just ends up lending itself to performativity.”

The students believe that the precedent of empty words was set by NYU’s response to Black Lives Matter’s momentum in the wake of George Floyd’s death. In contrast with Hamilton’s vague statements about anti-API racism, Tisch dean Allyson Green’s June 17 email to her students promised specific actions to combat anti-Black racism within the school. These actions included anti-bias training for faculty, diversifying faculty and creating organizations for students of color. However, Green’s silence in the following months left students clueless as to whether those changes were implemented.

Tisch senior Alyssa Silver is Japanese American and Jewish. She is also the co-founder of Tisch’s All Asian Arts Alliance. She explained that she and her club members met with Tisch administrators to hold them accountable for their statement.

“They hadn’t updated the student body on all those promises,” Silver said. “They have taken action on some things, but I think what they need to work on the most is transparency … It seems like they’d just forgotten about it from our point of view, which isn’t good.”

The students I spoke with proposed more ways NYU can improve, and also emphasized that NYU should work harder to support all of its students of color, not just API students. One common suggestion was that NYU should donate some of its money and resources to threatened communities of color in New York City.

“Listen, Andy,” Yue said about President Hamilton. “If you took some of my tuition and donated it to some charities or communities in need, I’m okay with that. Sending out a mass email is not it. That goes for all the movements, not just the AAPI one.”

Yue also advocated for a mandatory class on race and privilege for all students.

“I had to take Social and Cultural Foundations, I’m pretty sure somewhere in there you could sneak in Modern Society and Privilege,” Yue said. “And full offense to the people who want to be like, ‘It’s my choice to do whatever I take,’ but no, you should be required to learn about privilege and the effects of privilege on modern society. There’s no excuses.”

Drama students are also frustrated that there are more classes that discuss white playwrights. Tisch sophomore Anvita Gattani, who is Indian American, said that only contemporary plays written by people of color are assigned.

“Yes, let’s pay our respects to the classics, but you cannot act like in the last 20 years, all people of color and all queer people for the first time realized that they can produce art. That’s not true!” she said. “They are the classics and they deserve space in the classics.”

Gattani added that two of her white professors did their own research to include non-American and non-white perspectives in their lessons, which was not something they were trained to do. Their efforts made her both grateful and sad.

“I appreciated their initiative to bring this curriculum into the classroom because it was not required and because when they learned the subjects to teach them to us, they were not educated on international perspectives,” Gattani said. “So they had to do their own research to make their own curriculum and to create their own basis of even educating us about that.”

CAS junior Johnnie Yu, who is Chinese American, added that international API students have unique needs outside of the classroom. He explained that these students may need more help from NYU to travel between New York and their home countries given the pandemic.

“I don’t expect Andy to march with us or anything, but at the same time, I do think NYU does have a large international student community, so it does make sense that they would provide more resources or be in touch with the embassies of their most populated Asian countries,” Yu said.

To Yu’s point, 22.2% of NYU’s student body comes from outside the United States and last year, 78.41% of that population came from Asia. Moreover, the number of international students seems to be growing, as 31% of the class of 2024 is international. If international API students aren’t getting the resources and help they need from NYU, then that’s nearly a fifth of all students who are neglected.

“From a business standpoint, not supporting one of your largest minority communities doesn’t make too much sense to me,” Yu said.

Alisha Huang is a Stern junior and a New Zealander of Chinese descent. She adds that support for international students doesn’t only mean help with logistics, it means creating a feeling of belonging.

“[NYU] becomes their sense of home in this country that is so far from their real home,” she said.

Huang has been at home in New Zealand for most of the pandemic, but her international friends who are stuck in the United States have told her that NYU hasn’t been as reassuring as they had hoped.

“They were really saying, ‘I wish I could find the sense of comfort or being at home through NYU,’ so I think having more resources and more support systems for that, especially at a time like this, would, I think, make a huge difference in some people’s lives,” she said.

Asuncion has noticed that today’s high school students are becoming more involved in activism, and they predict that future NYU classes will be even less tolerant of racism — and of NYU’s responses to it.

“Social justice language is making its way into younger and younger age groups,” Asuncion observed. “These kids are not going to take no for an answer. They’re going to be louder. They’re going to be more upset. You know, as they should be. I feel like we’re the tail end of the silent agony group where we just kind of take it and move on.”

Tisch junior Grace Santos, who is American of Japanese and Brazilian descent, illustrated the latter mentality.

“I’ve always just accepted things the way they are, like if something’s racist, I don’t even realize it’s racist. I’m like, whatever, that’s the way it is, I have to deal with it,” she said. “So I’ve never thought of how can [NYU] change. It’s always how I can change to better fit.”

Asuncion believes that the tide is turning, and they eloquently warned NYU that incoming students will do even more to hold them accountable:

“You should probably cover your a– before these guys spank it.”