Owner Imad Khachan shares what chess meant to him growing up in Lebanon, how Chess Forum became a Greenwich Village icon and what the pandemic and “The Queen’s Gambit” mean for contemporary chess culture. 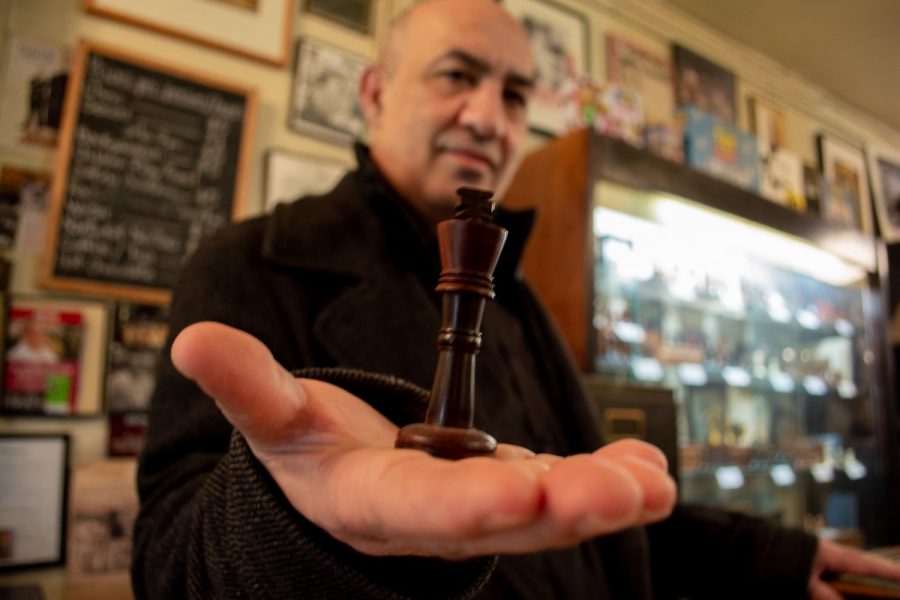 Imad Khachan, the owner of Greenwich Village’s Chess Forum, wants all visitors to feel at home. He joked that the tiny wood-saturated shop has the feel and smell of a grandparent’s house. Fold-out chairs sandwich the plastic-covered tables that line the store’s narrow back. Newspaper clippings, postcards and antique books cover the blank walls and formerly white lamps are now cream.

Due to the pandemic, Chess Forum closed between March and June 2020. It has since reopened and it’s getting back on its feet. Khachan, who started playing chess in 1985, has been the store’s owner since September 1995. The storefront, which sits on Thompson Street between Bleecker and West 3rd, had a history of chess long before Khachan took over. In 1975, Ukranian grandmaster Nicolas Rossolimo opened a chess shop called Rossolimo’s Chess Studio in the space.

Walking into Chess Forum is like traveling the world in a bygone era. The store radiates an Indiana Jones-esque aura: a medieval-inspired tapestry hangs from the ceiling, black-and-white photos of past matches and players line the hallway, and two metal horse heads and a vintage clock hang on the back wall. Chess sets of varying artistic and cultural styles — a Ukranian folk-themed hand-painted set, an imperial design with wooden pieces from Germany, “The Most Dangerous Game” made for three players, a chess set that wobbles — fill glass cabinets that line the walls. The store looks like it has remained untouched for decades.

Khachan and I sat at the first table in a row that extended to the back of the shop. He was wearing a long gray tweed overcoat that matched his bushy brows, but was a bit darker than his hair, which only surrounded his head from ear to ear. He pulled out a tiny, magnetic portable chess set, similar to the one he played on while growing up in his home country of Lebanon.

After hearing about Khachan’s life and his relationship with chess, the worldliness of the store makes sense. As he told the story of his childhood, he set up the board and began to move the pawns. Khachan lived in Lebanon during the country’s civil war. The town in which he lived had no electricity, loose dogs and frequent violence.

“It was like lockdown, except for years,” Khachan said. “It’s the same thing, except that you are safe with a mask and with distancing, versus if a bomb falls on your house, or if violence broke outside, we stayed indoors. As for kids, we had no option. It’s scary [to go outside], but the opposite was staying at home and losing your mind.”

Khachan would see other children playing chess and wanted to understand the language of the game. His eyes squinted, hinting at a bright smile behind his black mask. “I was fascinated by this,” Khachan said, framing the board with his fingers.

His father, who was a teacher of Arabic literature and language, played chess with a colleague who used to travel through the violence-ridden streets with his cardboard set. He spent the night at the Khachan’s house, playing chess while Khachan and his eight siblings watched. Khachan’s father was incredibly strict about intellectual activities — he did not allow games, cards or (when there was electricity) television. Chess, however, was an exception.

Khachan moved to New York in 1987 to attend a Ph.D. program for English at NYU. In 1989, Khachan started working in a chess shop in SoHo where he was later promoted to manager, then given ownership of the store in 1990. The previous owner suddenly changed the locks, though Khachan never got to run the store. He later quit NYU’s program in order to open Chess Forum.

“My life was like chess. I had to assess my position and figure out the right move. Whether I made a good move or bad is yet to be seen, but I am content with it,” he said.

I believe he made the right move.

As we spoke and Khachan played chess against himself, a young man dressed entirely in black came to our table. He just finished a game and was waiting for a friend. The man asked to sit in and listen to the interview. Khachan responded with “You can sit here. Please, feel at home.” Thirty minutes into the interview, this was the fourth time we’d been interrupted by a visitor that Khachan knew personally.

To Khachan, “home” is a word that inserts itself into almost every sentence. He takes great pride in the Chess Forum community. Since reopening in June, the store has not been as busy as it used to be. The store has also been unable to host classes and group lessons and will not host their annual children’s summer camp due to the pandemic.

Khachan said the store’s community does not “know how much rent costs or what long hours are being worked. That’s the parent’s job. If a parent cooks and the children don’t show up, then who do they cook for? They think we’re going to be here forever.”

Neighbors get their packages sent to Chess Forum if they won’t be home and drop off their laundry at the store. Recently, two boys who used to visit Chess Forum in the ’90s reconnected with Khachan by having their mother visit him while FaceTiming them. The sons are now in their late twenties, both living in different states.

Khachan explained, “These kids knew this place here, their mom used to bring them here, and now they get to see this place again. That’s the continuity that you need to survive as a business and a community.”

The Chess Forum community has shrunk. Khachan blames what he calls “the scorched earth of the internet.” He reminisces about his earlier years in the shop in the 1990s, where the chance of finding an empty seat was impossible unless you were willing to wait, and the store was open 24 hours. “There used to be blizzards, torrential rain — whatever it is, people were here.”

Without younger chess players joining or remaining in the community,  Khachan understands Chess Forum’s future is bleak. Many Chess Forum regulars bring, or rather, brought their children or grandchildren into the store.

“I’ve been stumbling upon this store since I was a kid. One day I just decided I needed to go in,” said Juliann Persina, who was a competitive chess player as a child. She is now in her early twenties, and playing chess with a friend from high school, Evan Morris.

“I like the ambience,” Morris said. “I like the fact that it’s this place just dedicated to chess. It seemed like a relic or an old institution of times gone by in New York. At the same time, it’s still vibrant with people who love the game.”

In the past ten years, he’s noticed more young people visiting the store. Some would attribute the rise in younger people attending the store to the popular Netflix series “The Queen’s Gambit.” Khachan only watched one episode of the show.

”If you are a chef or a waiter in a restaurant, I’d be fascinated [by a show] but they wouldn’t. It’s a diluted version of what happens,” Khachan explained. “You see the glory, but if one person out of the whole event came out truly talented and interested in the game, it will be worth it. If they stay with it, that person could potentially be the next world champion.”

Thanks to the booming popularity of the show, Chess Forum received many online orders for Christmas, and more visitors are interested in learning chess. Khachan is worried that customers may not know where to begin and could lose interest in the game if they attempt strategies that are too advanced.

“This past holiday season was the first time in my thirty years of business that I saw so many men buy chess sets for women,” Khachan explained. “Usually it’s the other way around. We usually sell to women buying for their husbands or fathers. If we sell more chess sets for Mother’s Day than Father’s Day, then “The Queen’s Gambit” would have started a cultural revolution in chess history in the United States.”

Khachan is just thankful the store is still surviving with the end of the pandemic in sight. “The main thing is that we’re still here. For the community to survive, they need a home. For whoever comes back, new or old, they have a home,” he said.