The law responsible for protecting people from sex-based discrimination in education has been updated by NYU. 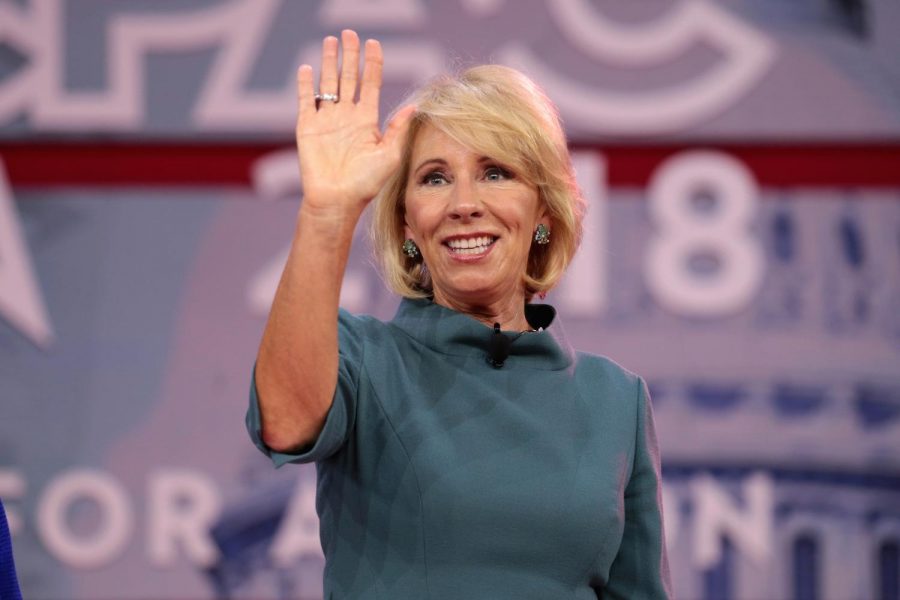 Secretary of Education Betsy DeVos recently amended the federal Department of Education guidelines under Title IX. New changes in Title IX have been adopted by NYU due to pressure of loss of government funding despite ACLU, student, and administrator push back. (Image from Wikimedia Commons, via Gage Skidmore)

The university has updated its Title IX policy regarding the schools’ handling of allegations of sexual misconduct.

The change, according to an NYU news release, was necessary to remain compliant with new federal Department of Education guidelines under Title IX, the law responsible for protecting people from sex-based discrimination in education. Any school that receives federal funding, such as NYU, must comply with Title IX or risk losing those funds.

The change in federal policy, championed by Secretary of Education Betsy DeVos, is intended to give the party accused of discrimination or misconduct more rights and tools to defend themselves by forcing institutions to follow strict guidelines in their internal conduct reviews. For example, the accused are to be provided with an advisor to cross-examine witnesses during conduct hearings.

Student groups, school administrators and civil rights organization have been concerned about these changes since they were first proposed. In May, the American Civil Liberties Union sued DeVos, citing concerns that the Title IX reform would create an overly adversarial environment –– whereby survivors of sexual assault would need a higher standard of proof than is required for most regular harassment proceedings –– discouraging victims from reporting sexual assault.

When this policy change was first proposed, NYU stated its opposition to the change in an open letter to Secretary DeVos.

“College campuses are not courts,” Lynne Brown wrote, NYU’s Senior Vice President for University Relations and Public Affairs, “and the introduction of this proposal would prove to be a poor fit. Such a procedure would favor those with access to the highest-priced, most aggressive legal talent; make the proceedings far more legalistic and adversarial, and less conducive to complainants coming forward; make proceedings longer; and yet not produce fair or better outcomes.”

As of August 14th, Title IX updates have been put in place. University administrators have attempted to balance former policies and the new mandate by providing survivors optional confidential support as well as continuing support programs including the Wellness Exchange, public safety services and housing changes.