How Students with Anxiety Disorders are Adjusting to Quarantine 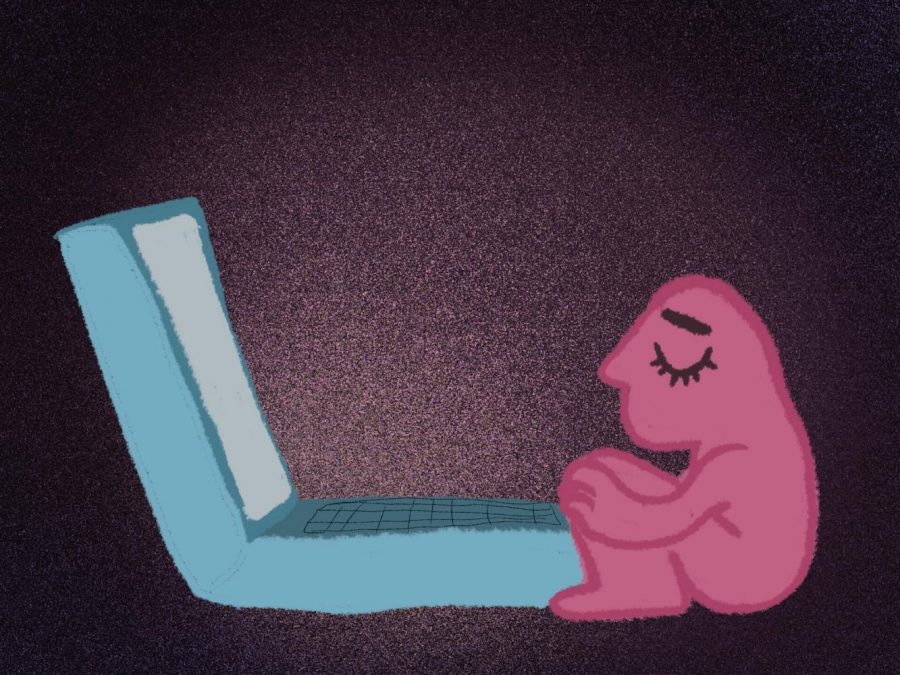 During a time when people are being encouraged to stay at home and avoid interaction with others, Tisch first-year Charlie Anderson finds it difficult to avoid giving into their anxiety. For Anderson, anxiety takes the form of bodily-focused repetitive behaviors, such as hair-pulling and skin-picking.

“Because I’m not in public anymore, there’s much less of a deterrent,” Anderson explained. “There’s hardly anything to stop me from pulling out my hair.”

Repetitive hand-washing, though recommended by the CDC, can be problematic as well; using soap and hot water causes skin to dry out more easily, causing Anderson to want to pick at it. Despite this, they still feel the compulsion to use very hot water.

“I know I don’t have to use scalding hot water to wash my hands, but if I don’t, I feel like it’s not doing anything,” Anderson said. “And I understand how soap breaks down germs, but that logic doesn’t sync up with my anxiety.”

With infection numbers continuously on the rise, institutions transitioning to remote instruction until further notice, the loss of millions of jobs and no clear idea of what the rest of the year will bring, many people have been struggling with feelings of fear and despair. But while a global pandemic can be stressful for everyone, it can take an especially hard toll on those with anxiety disorders.

Although everyone experiences stress and worry, people with anxiety disorders experience these feelings intensely and frequently enough that they interfere with daily activities. These disorders can take many different forms, such as generalized anxiety disorder, obsessive-compulsive disorder, social anxiety disorder and others. The symptoms are numerous: restlessness, chest pain, panic attacks, hyperventilation, insomnia, a rapid heart rate and compulsive behaviors are among the most common. During a crisis, people with anxiety may feel their symptoms starting to flare up.

Tisch sophomore Victoria Castro, who has obsessive-compulsive disorder, has experienced negative effects on her mental health as a result of prolonged social isolation. Going to class every day and interacting with other people used to be a way for Castro to distract herself from her obsessive thoughts, but due to COVID-19, she no longer has that coping mechanism.

“Being in quarantine makes every day a little bit harder, because my brain is always thinking,” Castro said. “I’m constantly, constantly thinking, and it’s really hard now to shut out those repetitive thoughts.”

The stress brought on by these obsessive thoughts has physical effects as well, which interfere with her studies.

“I’ve been in a sort of depressive state,” Castro said. “It physically feels harder to move. I don’t want to get up, I don’t want to do anything. I’ve had to email professors to tell them I don’t feel well enough to go to class today.”

These feelings of anxiety and depression can take an enormous toll on students, many of whom are already struggling with other pressures resulting from COVID-19. Mental health is affected by many factors, and chief among them is often a feeling of security and stability. Sudden life changes, such as the relocation of one’s living situation, the loss of a predictable schedule and financial instability due to losing a job can all be stress-provoking, and those with anxiety may have a harder time adjusting to these changes.

Though CAS sophomore Matt — who asked to keep his last name private — has social anxiety disorder, the most significant source of anxiety for him has been the financial consequences of the outbreak.

“I lost my job because of COVID-19,” Matt said. “I applied for unemployment four weeks ago, and I’m still waiting to hear back. If I don’t get it, I don’t know what I’ll do.”

NYU has been offering resources to students, ranging from financial aid appeals to coronavirus information to online counseling from the Health and Wellness Center. However, during a crisis as unprecedented and unpredictable as this, it seems there are no quick and easy solutions.

News channels and social media platforms have been providing a continuous stream of updates, which can be a double-edged sword. On the one hand, it is important to stay informed during a rapidly developing crisis, but on the other hand, the news can intensify the despair that many people are already feeling. For people with anxiety, being surrounded by constant disheartening reminders about the source of their worries can feel overwhelming, to the point where the only solution is to actively avoid exposure to them.

“I felt bad for not keeping up with the news,” Anderson said. “But I knew if I did, I was just gonna shut down.”

Anderson believes that the news directly impacts the emotional state of the public. Indeed, news coverage of the coronavirus outbreak has often been described as sensationalized and dramaticized. As a result, fear-mongering and false information have spread rampantly, leading to supply hoarding, anti-Asian racism and the ingestion of hydroxychloroquine and bleach.

In addition to listening to the news, being surrounded by others who share anxious feelings can be both comforting and troubling. People with anxiety are now seeing their own excessive worries and behaviors reflected in the people around them, perhaps for the first time. It is strangely validating, but also a chilling reminder of the severity of the situation.

“I want to be the only one who feels like the world is burning, because then the world isn’t burning, it’s just me,” Anderson said.

Moreover, comments minimizing anxiety can sometimes come off as dismissive of more serious issues that people may be facing.

“A lot of people have been telling me, ‘Everybody feels this way,’” Castro said. “And it makes me wonder: is what I’m feeling supposed to be this bad? Or am I just weak?”

During a crisis, many people who have never dealt with mental health issues before may find themselves experiencing anxiety and depression for the first time. Mental illness can manifest differently in different people, and each individual experience will not necessarily fit the cookie-cutter mold of any particular disorder.

Though some may say anxiety is “all in your head,” as Castro has been told, it can be just as difficult to cope with and overcome as a physical injury.