This Tisch senior thought his belongings were safely stored in his former Carlyle Court dorm room, until he was surprised with the severely damaged boxes on his doorstep. 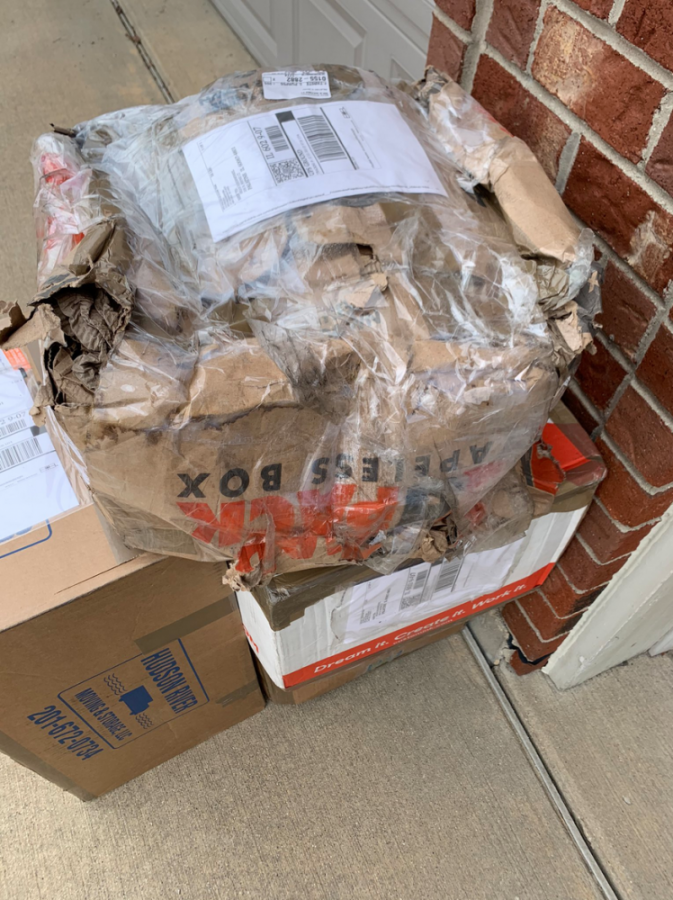 When Tisch senior Brian Rosenwinkel opened his door on Friday morning, he was greeted by several boxes — including one that was severely damaged — containing his belongings from his Carlyle Court Residence Hall dorm room.

The box appeared as though it had come straight from beneath a hydraulic press: it was smashed at the corners, with sticky tape used to hold ripped and falling pieces together. Parts of the box were open and the contents were left exposed to the elements. Rosenwinkel, shocked to see the state of his things, took to Twitter to share his experience.

He was not aware that the boxes had been shipped and never received a UPS tracking number.

On March 9, a memorandum from President Andrew Hamilton and the Senior Leadership was sent out informing students of the transition to remote instruction. It asked students who planned to leave the dorms for spring break to be prepared to continue their studies from home.

“Students departing for spring break should take with them any items essential to carrying on their education from home, such as laptops, textbooks, notebooks, essential papers, etc.,” the memorandum reads. “Students should also plan to carry home valuables and indispensable items in the event that a sustained period will pass before they are able to retrieve them easily.”

Rosenwinkel was one of the many students who left for spring break expecting to return to campus. Having served as a Residential Assistant at NYU Carlyle Court Residence Hall, he packed up all the essentials he might need for a prolonged break — not expecting that the remainder of the semester would be carried out remotely — and left for Chicago on Friday, March 13. On the following Monday, March 16, all the residents received the announcement that dormitories would be closing. Those who left were instructed to return as soon as possible to pack their belongings and vacate their rooms unless unable to return.

It was later announced that Carlyle Court and Third North Residence Hall would be offered as additional medical treatment spaces to ease strains on New York hospitals during COVID-19.

“If you are already away for spring break and had planned on returning, you should do so as soon as possible to pack up your belongings, if possible within 48 hours (for the reasons cited above), and certainly no later than March 22, when the halls will close,” the new memorandum reads. “If you are away and not [sic] able to return to campus before March 22 but you still have belongings in your room, please complete the survey in order to arrange for packing and shipping.”

After receiving the announcement, Rosenwinkel got into his car at 5 a.m. and drove from Chicago to New York to pack up his room. At around 10 p.m. he was back at Union Square and ready to move out when an update to the previous memorandum came out.

It urged students to avoid returning to campus and trust the university officials and staff with storing their belongings. Rosenwinkel attempted to completely move out that night, but realized he would have to leave a few boxes behind. He had no space in his car to transport everything back to Chicago with him.

“[I] had about two hours to pack up all of my things,” Rosenwinkel said. “Halfway through my trip we got the email that said, ‘Just kidding, we’ll pack up your things for you.’ A couple weeks later my Residence Hall Assistant Director reached out and she was just asking face-to-face ‘What is your plan for the stuff?’ I said ‘let’s store it’ and she was like ‘okay.’ Then Friday these boxes showed up at my door.”

On April 24, the same day Rosenwinkel received his possessions, Carlyle Court’s Residence Hall Director Josephine Gonzalez sent out an update to its residents on shipping the items left in their rooms.

“For those of you who were able to pack and box your belongings before the halls closed, we have already shipped a total of 9,142 total boxes from all our residence halls – 615 of which were from Carlyle Court,” the update reads. “For those of you who still have items left in your room unpacked, the restrictions on types of work that can be done in New York State are presenting some significant issues for us and as a result, we currently cannot give you a firm timeline on when your items will be returned to you.”

Residents of other halls, including Lafayette and Third North, received similar announcements.

When Rosenwinkel unexpectedly received his belongings, one of the boxes suffered extensive damage.

“Everything was destroyed,” Rosenwinkel said. “Stainless steel bent, pots and pans destroyed … A couple of lamps were broken. The box was so soaked and ripped open, things definitely fell out in transit. There were blankets and there were towels in there that were used to pad everything but then everything got soaking wet. And then the box bled through onto my duvet cover and sheets. Also dirt. The boxes were packed to be stored and not to be shipped. The smell was terrible. Because it was wet and sitting.”

Rosenwinkel didn’t know his things were being shipped and without a UPS tracking number, it is much more difficult for him to ensure the safety of his possessions and receive compensation for the damage done.

Looking for answers, Rosenwinkel called Residential Life and Housing Services. He knew every box was supposed to be insured, but was told he wasn’t likely to receive anything for his broken items.

“Whoever answered the phone was like, ‘Let me check on that’ and then she was like ‘you have to go to UPS,’” Rosenwinkel said. “She said most students probably won’t get emails with tracking numbers unless [you] specifically give them your email. So there might be students who will be receiving packages who don’t know it, who don’t have tracking information. How do you locate a box you if you don’t even have a tracking number? How do you file an insurance claim for a box you don’t have a tracking number for?”

Rosenwinkel was told the boxes weren’t insured through NYU, so the university would not be responsible for them in transit. The insurance was supposed to be through UPS with a discrepancy in how much the owner of damaged belongings would be entitled to. While Rosenwinkel was told he could get $300 by the Housing Services and Residential Life the UPS web-site caps the sum of compensation at $100.

“Maybe the email NYU sent was wrong. Maybe NYU has a special deal with UPS. I’m not sure,” he said.

While the university has yet to issue official guidelines on how students can go about receiving compensation and ensuring safety of their possessions, Senior Director of Executive Communications Shonna Keogan provided information regarding the current state of the situation.

“All boxes (approximately 10,800) that have been shipped to more than 2,000 students have been packed by the students themselves,” Keogan told WSN in an email. “No boxes were packed by NYU employees. Whatever the student source has seen on the website about capping damages at $100 is not applicable in this case.”

However, Keogan specified students wishing to file a claim for damage will need to provide their UPS tracking number in order to complete the process, the exact issue Rosenwinkel ran into. She explained the student, whose belongings were shipped without their knowledge, would have to file the claim instead of NYU, the shipper.

“If students file a claim with UPS and encounter difficulties, they should reach out to NYU Housing for assistance,” Keogan said.

WSN will follow this story as more students receive their belongings. Please reach out to [email protected] with any information.