‘The Moscow Rules’: A Subtle and Declassified Account of the CIA

Written by two decorated CIA officers, “The Moscow Rules” provides insight into the tactics carried out by the CIA during the Cold War. 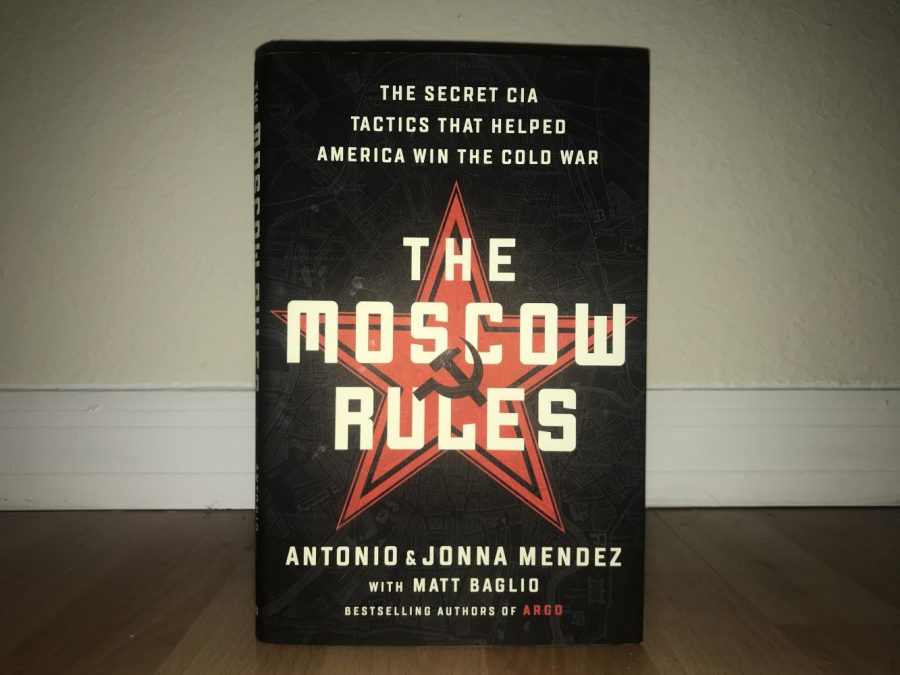 "The Moscow Rules" is a 2019 novel about the Cold War written by Antonio and Jonna Mendez, two of the most decorated CIA officers. Through their command of language and compelling narratives, Jonna and Tony Mendez capture the innovation of CIA operations that occurred at the core of America’s adversary. (Staff Photo by Nicole Chiarella)

Editor’s Note: The facts presented in “The Moscow Rules” were not independently verified by WSN. The following is a review of the book as it is presented.

In the chaos of mass hysteria and pasta shortages, I read a fascinating book that detailed the theatricality of the CIA’s Cold War operations. “The Moscow Rules: The Secret CIA Tactics That Helped America Win the Cold War” was co-authored by two former CIA officers, Jonna Mendez and her late husband, Antonio “Tony” Mendez.

Jonna Mendez had not sought out to join the CIA; she was working for Chase Manhattan Bank in Frankfurt when the CIA recruited her in 1966. Operating in the CIA’s Office of Technical Services for over 25 years, she had risen to the ranks of Chief of Disguise by the time of her retirement. Her expertise was in clandestine services, particularly disguise, false documentation and photography.

Like his wife, Tony Mendez had no explicit intention of working for the CIA — he was an artist. Recruited in 1965, Tony went on to become one of the most honored intelligence officers in CIA history. As the mastermind behind the ambitious Argo operation, the CIA awarded Mendez with the Intelligence Star — the highest distinction an officer can receive. Mendez helped revolutionize the field of human intelligence, and “The Moscow Rules” pays tribute to the unbridled patriotism and bravery that defines our nation’s first line of defense.

In their book, Jonna and Tony Mendez tackled the complexities of conducting clandestine operations on enemy territory. During the height of the Cold War, CIA operatives stationed in Moscow faced increasing pressure as KGB surveillance overwhelmed American intelligence methods. Still in its infancy, the CIA was in desperate need of improvement. Jonna and Tony Mendez introduced a new era of modernity that enhanced the CIA’s espionage capabilities. From office pens that hid high definition cameras to 45-second identity transformations, these previously unimagined techniques would eventually seal the outcome of the Cold War.

The book opens with a list of rules that were developed and adapted to combat the unpredictable environment that characterized 1980s Moscow. At the heart of these rules, was the CIA’s aim to protect American intelligence, impede KGB efforts and collect classified information from Soviet assets. Though there are over 40 rules mentioned in the book’s opening, here are a couple that best encapsulate the CIA’s versatility and valor throughout the Cold War.

“Don’t look back; you are never completely alone. Use your gut.”

In the 1970s, the CIA set their sights on wiretapping an underground communications line in Moscow. The biggest obstacle was finding a way for the officer to dodge KGB surveillance without a cover. Coincidentally, Tony Mendez had been toying with a new disguise strategy he called Disguise-on-the-Run. He first conceptualized this idea when he noticed that officers had the opportunity to take advantage of a brief period of time where there wasn’t any surveillance on the streets of Moscow. How big was the gap? Mendez set his estimates between 30 and 40 seconds.

Following months of preparing and perfecting his technique, Mendez felt confident when he presented it to his boss, the then director of the Office of Technical Services. Dressed in a black raincoat, pants and shoes, and carrying an attache case, Mendez was ready to put on a show. He had 45 seconds, and 45 steps, to modify his entire appearance.

He began by taking a few steps, then placed his attaché case on the ground. He pressed a button on the case, converting it into a pop-up grocery cart loaded with inflatable groceries. Mendez proceeded to reach for his raincoat, seamlessly reversing it to reveal a pink dress. A shawl draped over his shoulders. Taking his next steps, he hid the pant legs under the dress, uncovering the black tights he was wearing. He continued by sliding off his shoes — he placed them inside the dress to create female breasts — and exposed his black Mary Jane shoes underneath. Halfway through his performance, he pulled out a self-made mask from one of the dress’s pockets. With one quick move, he put the mask over his head and revealed a gray wig from under the shawl, placing it over his hair. The 45 seconds were up, and Mendez accomplished the complete transformation.

When the case officer learned the technique and applied it in Moscow, he entered the area without attracting KGB surveillance. Mendez’s Disguise-on-the-Run concept had become an effective reality. Needless to say, the tactic was a success.

“Only approach the site when you are sure it is clean.”

The CIA recruited a Soviet diplomat, Aleksandr Dmitryevich Ogorodnik — who expressed discontent with the Soviet government. Code-named TRIGON, he provided the CIA and U.S. policymakers with an unprecedented amount of valuable Soviet intelligence.

As a precaution, TRIGON asked the CIA for an L-pill. If he was caught, TRIGON didn’t want to suffer at the hands of the KGB. The CIA typically refrained from supplying L-pills —  incessant paranoia and anxiety sometimes tormented agents — and instead prepared exfiltration plans for their agents. TRIGON insisted on acquiring an L-pill, refusing to spy until the CIA guaranteed him the pill. The CIA eventually obliged, and TRIGON’s spying continued.

“Our case officers’ goal is to keep agents safe, not give them the tools to end their own lives.”

TRIGON’s operation ran smoothly, until it didn’t. Working for both the KGB and CIA, he was eventually compromised and subsequently arrested by the KGB. There was no interrogation, torture or execution. He sat at his desk — the KGB removed all his clothing, leaving him in his briefs — and requested his own pen to write the confession of his treason. When he received his pen, he bit into the L-pill and died in seconds.

Through their command of language and compelling narratives, Jonna and Tony Mendez capture the innovation of CIA operations that occurred at the core of America’s adversary. The extent of the CIA’s deception and illusion almost makes the agency seem as fantastical as it is secretive. “The Moscow Rules” is the couple’s latest and final venture into the world of espionage, and one that’s definitely worth the read.