At a secular institution like NYU, being a devout student of faith can be an isolating experience, but within religious centers, tight-knit student networks offer support and friendship. 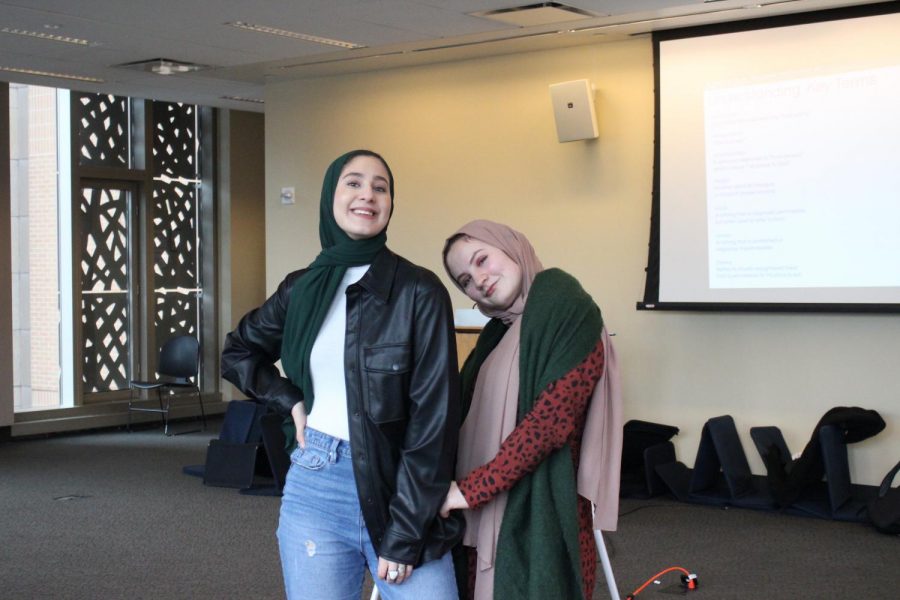 As commuter students, Sarah Elfarra (left) and Melanie Mohsen (right), spend their time between classes on the fourth floor of G-CASL to be close to the mosque prayer space. (Photo by Ali Zimmerman)

The end of spring marks Melanie Mohsen’s favorite time of year. Beginning on April 23rd, she along with millions of other Muslims around the world celebrate Ramadan. During this month, the CAS senior will fast during daylight hours, enjoy special meals with friends and family and pray — sometimes late into the night. But for Mohsen and other Muslim students at NYU, Ramadan can also be one of the most challenging times of the year. It often coincides with final exams, which can present a difficult balancing act between academics and the spiritual demands of the holiday.

“I think the hardest thing about Ramadan is having to maintain your own religious values while being a student,” Mohsen said. “You’re not only staying away from food, but you’re also trying to get closer to God by reading the Quran more and praying more.”

Ramadan occurs throughout the ninth month of the Islamic calendar, and during this time, many Muslims will choose to avoid eating and drinking from sunrise until sundown. The practice, as well as abstaining from things like sex and gossip, are meant to place emphasis spirutual awareness over basic human needs and desires throughout the weeks of observance. But at a secular school like NYU, Ramadan often overlaps with final exams, meaning some Muslim students will face the additional challenges of having stay focused on studying without food and coffee. And when surrounded by non-Muslim professors and students during finals season, students observing Ramadan often have to grapple with a lack of awareness surrounding their religious obligations.

“Ramadan is supposed to be hard, and we get that, but I feel like more could be done [at an administrative level] to make it easier,” Steinhardt alumna Sarah Elfarra, who graduated in December 2019, said.

For observant students of faith a at secular institution like NYU, a holiday like Ramadan — which is meant to be an opportunity to give full attention to religious devotion — can be placed at odds with academics, leaving individual students to balance the space in between. At NYU, spaces like the Islamic Center on the fourth floor of the Global Center for Academic and Spiritual Life provide many students like Elfarra and Mohsen support — in the form of like-minded peers and religious leadership — to help stay in touch with their religion, particularly during more demanding times like Ramadan.

Outside of these religious oases, being a student of faith at NYU comes with a set of hurdles during both religious holidays and day-to-day life. But perhaps more effort could be made — such as a mass email alerting the NYU community of Ramadan — to bridge the gap between religious and secular aspects of NYU life, particularly when it comes to accommodation and awareness around special religious observances and representation of a variety of faith groups.

Gallatin sophomore Aliza Goldberg was raised in a Modern Orthodox Jewish community in Northern New Jersey. The presence of Judaism on campus was one of the primary things Goldberg considered when choosing a university, and she chose NYU both for the active Hillel and the large Jewish communities at universities across downtown Manhattan. She knew that many friends she had met at Modern Orthodox camps and schools ended up at schools in the area and hoped to rekindle old friendships and form new bonds within the New York City Jewish community.

Goldberg keeps kosher — she adheres to a set of dietary laws originating from Jewish scripture prohibiting the consumption of foods including pork and shellfish as well as mixing meat in dairy in the same meal. She has two sets of dishes in her apartment for meat and dairy. Her roommates are also Jewish and adhere to the same dietary restrictions.

“A lot of these things just become subconscious, inherent definites,” Goldberg said. “I have to live with someone that keeps kosher just because of the things that go awry with someone that’s on a different schedule than you.”

She observes Shabbat from sundown on Friday until sundown on Saturday every week. She usually participates in the weekly programming offered between the NYU Bronfman Center for Jewish Student Life, the Chabad House on Bowery and Orthodox dinner and services in GCASL on Friday night. Goldberg has made friends within the Orthodox Jewish community at NYU and when official programming ends, they often congregate at someone’s apartment to enjoy Shabbat together.

“We do this thing called a ‘tish,’ which is just sitting around with wine and cake and schmoozing and talking about God and religion and philosophy and life,” Goldberg said.

While Goldberg is grateful for the abundance of resources for Jewish students she has found at NYU — she has rave reviews of the kosher dining hall at Weinstein — she believes that the administration mishandles certain issues pertaining to Judaism. The fact that some clubs and class times interfere with Shabbat is, for Goldberg, a justifiable consequence of attending a secular institution, but she believes that all classes should be canceled for Rosh Hashanah and Yom Kippur, arguably the holiest days of the year in the Jewish calendar.

“I think it’s strange that we don’t get off,” Goldberg said. “Those are universally accepted public school holidays and all of my friends are off, but I have to catch up on those classes I miss.”

Several schools — SUNY Binghamton University and The New School — for example, cancel classes for Rosh Hashanah and Yom Kippur. At NYU, however, Jewish students who choose to spend the holiday at synagogue or with family run the risk of falling behind in class, even if their absence is excused on paper.

Aside from holidays, some students feel that inadequate or unequal funding and staffing for religious spaces hinders the cultivation of a sufficient support system for certain students of faith.

Mohsen — the Vice President of the Muslim Students Association at NYU — is a Shiite Muslim, a minority both around the world and at NYU, where Sunni Muslims make up a majority.

While she believes that the welcoming student culture in the Islamic Center emphasizes the harmony between both sects of Islam, she was surprised to find that there was no Shiite representation on the board of the Muslim Student Association. To ensure that future Shiite students will continue to feel welcomed, Moshen created the Ahlul Bayt-al Chair position, a now-permanent seat to give a voice to Shiite students.

Gallatin senior Alisha Aggarwal, the president of the Hindu Student Council at NYU, was surprised to find that while there are certain spaces dedicated to Jewish and Muslim students at NYU, no such place existed for Hindu students.

Aggarwal was raised in Delhi, India, where Hinduism plays an integral part in culture and family life. She has spent the latter half of her life in the United States, and during her first year at NYU, she teamed up with a friend with the hopes of creating a permanent temple space for Hindu students.

In order to receive funding, they had to prove that students would show up, and at first, Aggarwal held weekly hours to prove interest in the temple. This was a difficult roadblock to overcome due, in part, to the fact that many Hindu practices revolve around personal reflection which might steer people away from designated temple hours which could draw a larger crowd.

Aggarwal networked with friends and was eventually able to prove interest in the temple, but still, reluctance from NYU administrators to designate a space for Hindu students — unless a large number would come — proved the most difficult hump.

Although Aggarwal succeeded in establishing a more consistent space for Hindu students at NYU, she feels that the space is still sometimes disrespected, having to share the room with other programs.

“After three years of being here, we did get a space for our temple but it’s just a small office room, and we were sharing it with people, and at one point they put a huge industrial-sized fridge in our tiny office,” Aggarwal said. “You’re not supposed to wear shoes inside a temple and we put up signs, but people will still go in with shoes.”

Despite some difficulties, establishing a Hindu center at NYU has allowed Aggarwal to reconnect to a type of Hindu community she experienced while living in Delhi.

“[Hinduism] gives me an anchor that keeps me going through life,” Aggarwal said. “It’s more a guiding force than a rule book.”

College can present existential questions for young people to grapple with. For some, religion provided a space for personal introspection as well as a guide for secular aspects of life, which can come in handy with balancing a busy schedule.

“I hate the word ‘religiosity.’ It makes things become very external,” Aliza Goldberg said. “I’m not more religious than someone else because I wear a skirt or cover my elbows or keep kosher. It’s just a question of your mindset and your devotion and how much is true to you inside.”

From an outsider’s gaze, religion in general is still often associated with outdated morality, and the personal nature of religion and in some cases, larger evolutions in ideology, are often overlooked.

“Conversation about religion is really hard to have,” Aggarwal said. “There’s almost a negative connotation to being religious which I can understand in the current political climate. But I just wish religion wasn’t associated with being conservative, which I think happens sometimes.”

Elfarra, Mohsen and several of their friends choose to wear a hijab every day. They feel that assumptions often accompany first impressions for Muslim women wearing hijabs.

“The hijab is so present, you can’t miss it,” Steinhardt senior Dunia Ali Alawi, who is Muslim and chooses to wear a hijab every day, said. “Just because we follow a religion where you can point us out just by looking, don’t put all Muslims in a little box and assume we are a certain way.”

Similarly to certain aspects of Islam, Christianity can sometimes be linked to conservative thinking in liberal environments like New York. CAS junior Sam Lee was raised Catholic as a member of a Korean-American church in his hometown Palo Alto, Calif.

“Over the past couple of years especially, I think there’s been a lot of bad media around Christianity, and I understand why, but now I do think twice about saying I’m Christian,” Lee said. “Some people will judge you.”

For Lee, finding a church in New York which shares his approach to Christianity is still an unmet goal, and the distraction of living in New York and of college life in general have put the biggest strain on his relationship to the Christian faith.

“College life is equated to party life, and having that peer pressure is definitely not conducive to being religious,” said Elfarra. “There’s this idea that in college you should go crazy now and make up for it later, but in Islam, we don’t have that option.”

Many practicing Muslims do not drink, a practice that can run antithetical to archetypal social interactions at a university.

There are some obstacles, but for many, the reward that comes with religious devotion is worth the cost. With paradoxically welcoming and tight-knit religious communities setting the pace at each spiritual center on campus, many find their religion is just the outlet they need to stay focused, motivated and happy in college.

A version of this article appears in the Monday, Feb. 3, 2020, print edition. Email Ali at [email protected]