This is the first of four installments in Under the Arch Voices’ new monthly serial. 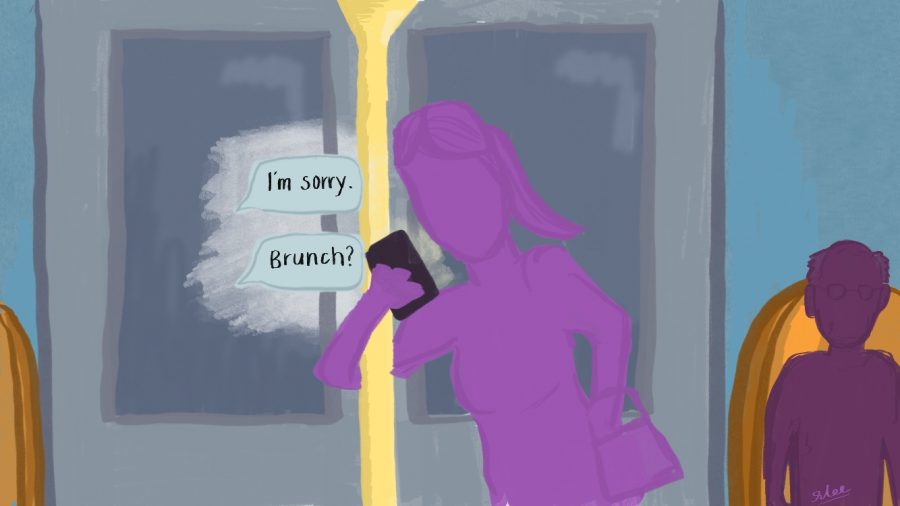 What does a 15-minute delay mean to a city that runs at 1000 miles an hour? When a subway grinds to a halt in the middle of a tunnel, four strangers with different backgrounds, ages and destinations are forced to take the time to find out.
Written by four different authors and released in weekly installments over the course of October with custom illustrations, Voices is proud to launch its first run of a serialized story.
Written by: Jessica Fiorella
Illustrator: Rachel Lee
“Hi, Natalie. It’s Tom. I’m not sure if you still have my number. Or if this is still your number, but I thought I’d give it a shot. I’ve had a pretty crazy year. It forced me to do a lot of self-reflection and I realized that I maybe wasn’t always the most empathetic or considerate version of myself when I was with you. And by maybe I mean definitely. I was really immature when we were together, and I think that I projected a lot of my personal insecurities about relationships onto you. You obviously deserve better and I wouldn’t blame you if you never wanted to see me ever again. That being said, I’m going to be in town this weekend and I would love it if we could get together for brunch or something. This probably sounds silly, but I was hoping that I could apologize to you in person. And I would love to just catch up. In spite of everything, you were one of my best friends in New York. I miss talking. Anyways— I hope to hear from you soon.”

I thumb through Tom’s messages again as I lean against the cool metal of the subway pole. “I’m sorry, let’s get brunch?” How could he expect me to agree to something like that? It had been a year since he had left the city without explanation, and a year since I suggested to him that we might expand the jurisdiction of our relationship beyond post-work drinks and sleepovers where I was served cab money for breakfast the next morning. To meet with him now — to give in to what is an obvious ploy to absolve himself of whatever marginal sliver of guilt he might feel for the way we left things — would be a disservice to the months I spent unraveling the anger and humiliation I felt being abandoned by a 23-year-old man-baby I thought I might have loved.

Of course, I am on my way to meet him. But not so that I can absolve him of his half-man, half-baby guilt. No, not at all. Rather, I’ve spent the last week devising what I consider to be the only adequate punishment for the way that I was treated. It’s simple: I meet Tom for brunch. At brunch, I am beautiful and amicable, and tell him that I’ve moved on. Everything that happened between us? Water under the bridge.

That’ll have him feeling secure enough to let his guard down. Then, I’ll order a mimosa. Then two. Then 10. And a stack of pancakes. Maybe some eggs. Maybe a bruleed grapefruit. The possibilities are endless, but they all lead me to the same death blow. Midway through our brunch, I’ll excuse myself to the bathroom. He won’t suspect a thing, because I’ve been so beautiful and amicable up to this point, and I’ve had a lot to drink so it’s reasonable to assume that I have to pee. Then, I’ll sneak out the back, and he’ll never see or hear from me again.

My thinking is cut short by the subway train screeching to a halt. The sudden break in momentum makes me lose my footing, and as I scramble to steady myself, my phone slips out of my hand and skitters across the aisle of the train car, Tom’s message still on full display.

As the train settles, I go to pick up my phone. The screen is cracked, and behind the glass is the striated rainbow of a ruined LCD.

“Sh-t,” I say again, slipping the phone into my back pocket.

I return to my subway pole and peer out the train car window, only to be met with the thick darkness of the tunnels. The loudspeaker crackles overhead and the conductor murmurs something unintelligible. The only distinguishable word is the one that I was dreading the most.

My fellow passengers groan. Delays? No. This can’t be happening. This could ruin everything. If I’m late, who’s to say that Tom won’t just assume that he’s being stood up and leave? The whole point of meeting him in the first place is to offer forgiveness and then rip it away! If I didn’t show up, there would be no feeling of loss, no sense of betrayal — I had never felt lower than after seeing his new Los Angelian apartment on Snapchat three days after he stopped returning my calls. Even if he waited up for me, there’s no doubt my late arrival would make him skeptical. He’d spend our whole brunch watching me through narrowed eyes, wondering if I was trying to pull one over on him. Then, when I finally did sneak off, he’d just sigh and think to himself, “could’ve seen that one coming.”

No. I can’t accept it. Instinctively, I pull out my phone to send him a message, only to be reacquainted with my damaged screen. I tuck it away with a huff. Even if it wasn’t destroyed, there’s no service this deep underground. I have no choice but to hope that this train starts up again. Or that he waits for me. But why would he? The Tom I knew wouldn’t have. Did he really expect me to believe that he was so changed now?

I tap my foot anxiously, powerless to do anything but wait. My mind begins to run in circles. I’m going to see Tom. I can’t help but look back on the months we had spent together. We met in college toward the end of our senior year. We were in an elevator, and as I stepped off, my student ID slipped out of my pocket.

“Hey!” He called, holding the elevator doors open with an outstretched arm. “You dropped your ID.”

“Oh, thank you!” I hurried back down the dormitory hallway to take it from him. Then, tragedy struck. As I extended my hand to grab the ID card, he released his grip prematurely, dropping the thin piece of plastic directly into the gap between the hallway and elevator, down seventeen stories to its final resting place, collecting dust in the depths of the elevator shaft. The next day, I walked him to Public Safety to buy me a new one. He was funny and cute and after he shelled out 25 dollars for my new ID, I offered to take him to lunch.

“I have a girlfriend,” he said.

“Oh. In that case, sure. I was just looking for a polite way to communicate that I don’t want to be anybody’s boyfriend.”

Within the month, we were sleeping together.

Post-graduation, we fell into a fairly predictable routine. Every Friday at 5 p.m. I’d get off work and drag myself to a sports bar around the corner for wet-cardboard-esque French fries and a couple of beers. Then, we’d stumble off to his frameless bed. I’d fall asleep face down on his pillow and wake up with fresh blackheads from his unwashed pillowcase, and leave unshowered in the morning while he smugly scrambled himself eggs and ushered me out the door. Some nights we’d stay up together and watch movies that he had too many opinions about. Sometimes I’d listen to him whine about his stupid day job. Sometimes he’d ask about me. But not often.

In spite of everything, it was during these nights that I began to believe that I loved him. Or that I could. At the very least I thought we could expand our Fridays to whole weekends. Which made it all the more humiliating that my feelings went unreciprocated. Even now, clinging to the subway pole, foot-tapping in aggravated impatience, I couldn’t help but feel a smidgen of warmth in my reflection. It was a warmth that I had spent months stamping out, and one that I refused to fall victim to again. After all, that would throw a real wrench in the whole revenge ghosting.

I shake myself from my thoughts, my gaze moving from the speckled floor of the subway to an old man. I can’t help but feel a twinge of envy. How simple romance must have been when he was 20. I suppose had I been alive back then I’d be married with kids by now.

No, I won’t fall back in love with Tom. But maybe I’ll put one less mimosa on his bill.