A Letter from Salzburg to New York | Salzburg, Austria

Maxine attended a six-week exchange program with the Salzburg Experimental Academy of Dance (SEAD). This is not affiliated with an NYU global site. 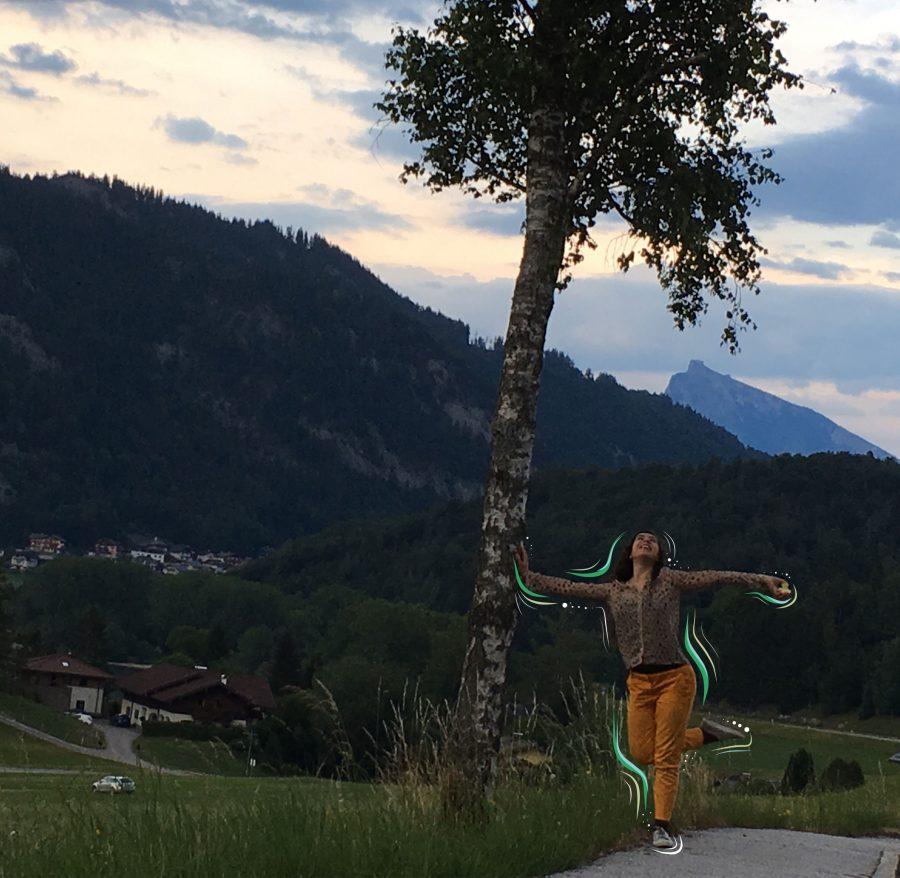 I never thought I’d be busier in Salzburg than I was among your sweaty, summer city blocks. The tree-lined country roads surrounding our Airbnb were like the roads to happily-ever-afters you glimpse on the last pages of fairy tales. It wasn’t surprising to run accidentally into a palace like Hebrunn or Leopoldskron, both film locations for “The Sound of Music,” nor was it unusual to fantasize about living in one of the studios of Künstlerhaus, a resident space for artists of multiple disciplines. But the 30-minute bus ride along the Szalach River to the Salzburg Experimental Academy of Dance (SEAD), was the most scenic: the southern snow-capped peaks like Hershey’s Kisses and the bridges like crossings for the Three Billy Goats Gruff.

My roommate and I entered dozens of micro-climates in the smoke breaks between classes — the Italians yelling joyously at each other from across a cafeteria spanning the footage of a parking spot; the Frenchies lounging cross-legged by the door, rolling tobacco as casually as if they were snapping peas; our ballet teacher, a Texas native, whiffing as often as her students, her feet immediately in the kitty pool at the conclusion of afternoon classes; bikes constantly being parked and unchained in this utopian mid-’20s dream where cars are no more.

And with the post-heatwave rain came “Lust Am Risiko,” a student-run festival — alongside Salzburg’s own performing arts festival, Summer Szene — of homegrown performance, film, and installation, each exhibit inhabiting a studio or hallway or staircase, perhaps a wonderful reminder of what you can create with a rooftop, a window, a voyeur, a light bulb, a tent, a dancer, a song. I think New York may eschew the idea that true youth — not the youth of conjuring what once was, but the youth of discovering the things that are — elicits craft.

Our final week of the exchange, guest teacher German Jauregui expanded the idea of dance composition into six-hour days of asking questions, writing poems, experimenting with space — specifically, hour-long improvisations with closed eyes and hour-long sessions of staring into a partner’s eyes. Perhaps it was the deepest I’d ever traveled into the theoretical practices of choreography, and with that, the further I went into my youth not as a living memory, but as a relived reality.

While the Forsythian methods of choreographer Leo Valere differed from Jauregui’s because of the higher level of physicality required, they remained in the same cognitive field. For example, Valere gave instructions to choreograph architectural sequences — or as I called them, “puzzle boxes”— with only our hands and the hands of our partner. As they became more practiced, we were told to speed up each sequence to the pace of a fast-forward — from 30 seconds to five — without losing the rhythmic or structural integrity. Our brains ached in the four-hour Creation rehearsals, from the repetition, from all the energy condensed in our fingertips. It felt like if Calculus asked dancers to illustrate rates of change, like we were little pixels stuck inside a graphing calculator.

But now I miss this: our weekend dips in the cool canal, and our visits to Lake Fuschl to refresh ourselves from the movement overload. Surely all of us who visited SEAD wish to transport a piece of this creative peace of mind back to the dancers of New York.

Another visitor to the city where the true artist shall never be bored.