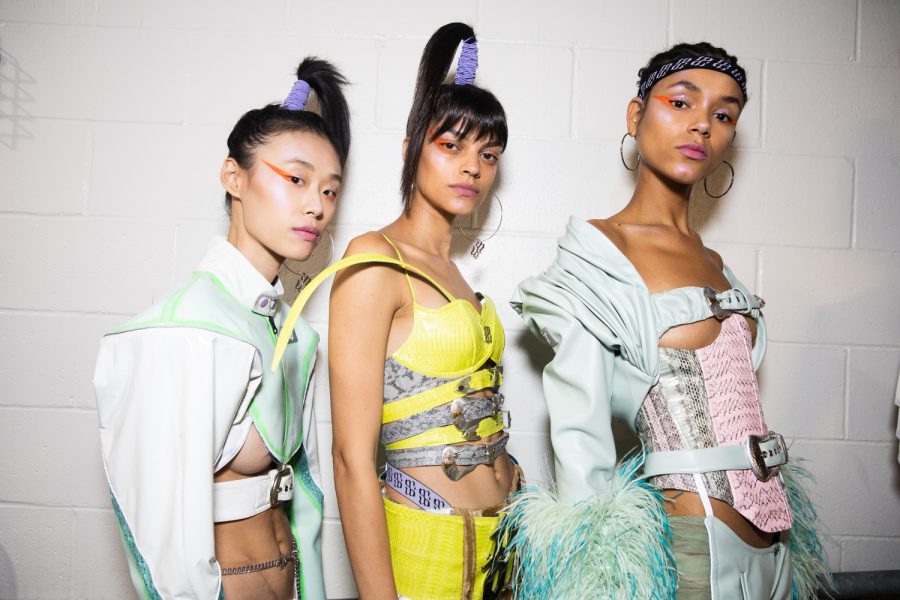 Crowds of eccentrically dressed attendees lined up around the Barclays Center on Thursday night, hoping to snag a coveted standby wristband that VFILES announced to their 400,000 followers they were giving away on Instagram. Celebrities like Tana Paul, Nikita Dragun, and Blair St. Clair were among the audience who had VIP seats, right by the action.

Rather than jumping immediately into the runway show, multiple singers and rappers, including Penelope and 27stvsh performed, making it feel like more of a concert than a show. Rico Nasty was both one of the mentors on the design panel and the last performer before the runways started. Additional acts, like Brooke Candy, took the stage between collections. Although the collections were unique and spectacular, they were eclipsed by booming music and virtual reality robot that narrated the show.

This cohesive and colorful collection featured many tight, structured bodices, metallic fabrics and hints of purple and green. While many of the pieces held their shape, extra details expressed strong movement through the use of fringe and flowing fabric.

Models sashayed down the runway sporting high necked and boxy silhouettes in shades of white and beige. The pieces then shifted into black, many of which had black laces wrapping around the models legs for a body-hugging effect.

Verhaegen’s collection featured heavy knit pieces layered onto the models, and the rips in the garments created additional texture. This line was also comprised of loose fitting sweatshirts, pants and coats in rust red and olive green tones, but the show was overshadowed by the pounding screamo music playing in the background.

The final collection was the most unique of the night. The looks looked like they were from a sci-fi movie, structured with tubes and interesting shapes. One model had handles coming out of her chest, while another had airplane wings attached to her arms. The materials and patterns made this collection stand out amongst the rest.