Comedian, actor, writer, podcaster and producer Peter Holmes spoke with WSN about the new season of his HBO show “Crashing” and gave his thoughts on modern comedy. 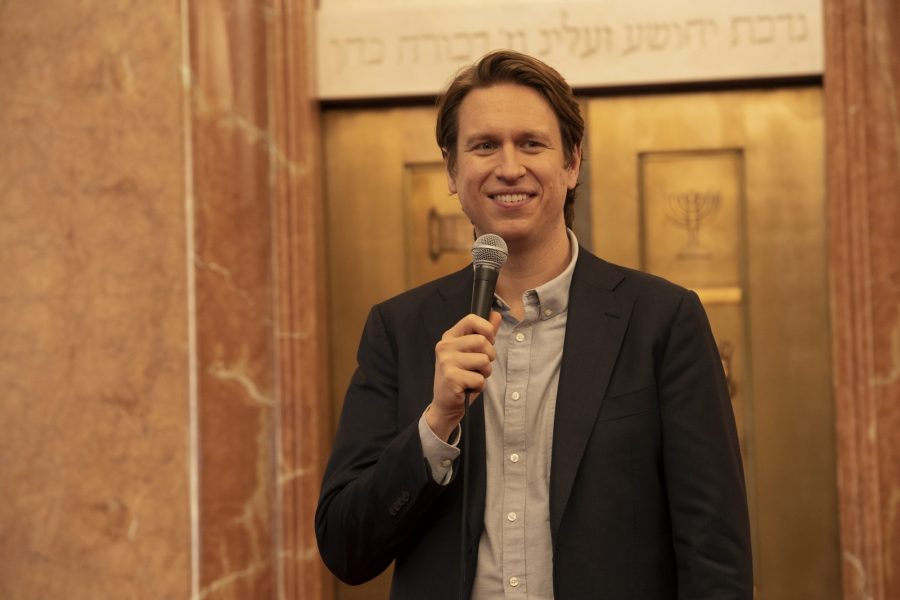 A still of Pete Holmes, from the HBO show Crashing. (Courtesy of Craig Blankenhorn)

For Pete Holmes, the essence of comedy is truth. This is perhaps why he incorporated several real-life events, like how his ex-wife’s infidelity led him to pursue comedy, into his semi-autobiographical TV show “Crashing.” The writer, producer and star of the show continues to reflect on his rise in the entertainment industry as well as how he gradually grew to discover his comedic identity in the new third season.

“I think comedy is one of the weird art forms, I’ll say, that people are sort of encouraged to speak the truth,” Holmes said. “The line that most people would stop at is sort of where the comedians [start] working.”

The third season revolves around Peter (Holmes) continuing his college tour and discovering his comedic identity, all the while handling the unpredictable nature of his job, which includes joining a Christian comedy tour in an effort to monetize his faith. Holmes actually did perform at many colleges when he started in comedy and found those audiences more challenging than he expected.

“When I did a lot of colleges, I would sometimes do broader material because you’d end up doing colleges that had the parents’ weekend or something,” Holmes said. “As the comedian, you’re like, ‘How do I write a joke that the mom and the dad and the student are gonna like?’ And that’s where you start getting jokes like my joke about peeing in the pool where anybody can laugh at that. It’s not great, but anybody can laugh at it. In fact, I did that joke for 10 years. I’ve probably done that joke a thousand times.”

Holmes refers to a set that he performs in the first episode of the new season, in which he talks about how kids in his neighborhood would pee in pools as practical jokes because the chemicals in the pool would make the water turn red. He presents these jokes during a short spot at the legendary Comedy Cellar and gets a fair amount of laughs, thinking he’s killed it.

Peter is ultimately rejected by Estee (Estee Adoram), the Comedy Cellar booker, for a lack of a clear, diverse voice. “Who are you, why are you and why now? I have plenty of white guys talking about nothing,” Estee says. Peter leaves speechless, confused and insecure about his career and his comedy.

Holmes related how he felt the same for years before finally having a performance in which he became more comfortable with his place as a stand-up comedian.

“I think I was just doing 15 minutes or something, and I was just loose,” Holmes said. “There’s something that clicks in a comedian when he realizes, or she realizes, that it’s not really about the words. It’s about sharing your presence and sharing your variedness with the audience. Not like trying to trick them but actually being with them and being a funny person.”

But as far as “Crashing” goes, this version of Holmes still has a long way to go before getting to that point. Peter’s journey over the course of this season is a combination of hilarity and emotion, instead of absurd or raunchy humor that would have soured the experience. Holmes spoke about the benefit of being able to make a comedy show about comedians themselves which, to him, actually helps add to the realistic tone.

“I think ‘Crashing’ is sort of about following your dream and when you make that dream comedy, all the characters have an excuse to be really funny,” Holmes said. “Other shows that are funny and make their characters funny, even though they might, say, be psychologists, they always feel a little bit less real. We enjoy the luxury of feeling real and also having everybody be funny.”

The show does not pull any punches in showing Peter’s slow crawl to success — when Estee rejects him, she also hires young Jaboukie (Jaboukie Young-White) despite Pete’s having worked twice as long. But with the new season, Holmes and executive producer Judd Apatow took a look at the toxicity in the comedic landscape as well.

Holmes commented on the episode and how there have been some positive developments in the comedy scene that allow for more representation and the progressive evolution of comedy itself.

“We were all doing observational stuff, or just very similar, interchangeable stuff,” Holmes said. “And now when you look at the comedy climate you see a diversity that reflects the country better and also the world better.”

But Holmes also acknowledged that change is far from over. A major part of the reason he and Apatow wanted to focus on the misogyny and egotism seen in comedy clubs was essentially to put a lens on the microaggressions that are not talked about nearly enough. Through a character like Jason, and to a certain extent Pete himself, who is struggling to find his distinct voice, “Crashing” is able to comment on the benefit and need of unique paradigms in contemporary comedy.

A development in stand-up comedy that Holmes is more critical of is the integration of social media and the instant gratification that comedians seek with their material.

“So what we’re sort of lacking, a little bit now, is that really boring book-nerd-style comedy approach that [Jerry Seinfeld] has and that a lot of those earlier guys have, which is like, they didn’t just upload something instantly,” Holmes said. “They went into their rooms and sort of sweated over it for weeks and didn’t show anybody and there was a lot more craftsmanship to stand up in the ’80s. And we’ve been losing it every year more and more. But it’s hard to resist that call to get the feedback instantly.”

Holmes described how he undergoes a combination of processes, from being inspired on the spot through conversation with someone to writing on his own to writing from the stage — he, and many other comedians who got their start alongside him, directly test out material on stage and gradually refine the jokes. As Holmes tries to tackle his own comedy from all angles, he uses the same approach for “Crashing,” making a show that is as heartfelt as it is funny, and is ultimately a self-reflection of how he discovered his own artistic voice.

“At a certain point, maybe five or six years in, you start to realize that it’s not really about jokes. It’s about using jokes to communicate your natural humor,” Holmes said. “And it’s the lesson you can only learn by doing it over and over and over. So, I remember where I was when that happened to me, and hopefully that will start happening more for my character as well. I’m rooting for him.”