NYU announced at a University Senate meeting that it would no longer buy plastic water bottles starting in 2020, although vending machines on campus will continue to offer them. 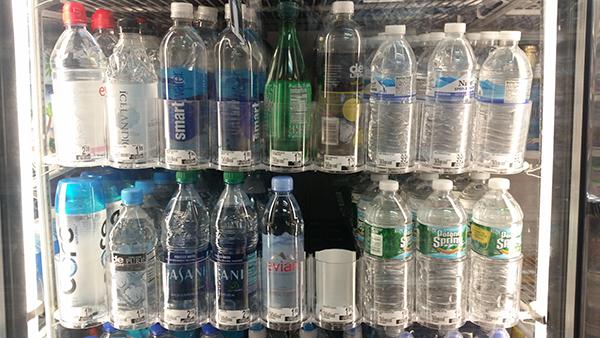 NYU announced that it will no longer spend money on plastic water bottles. WSN File Photo.

In NYU’s movement toward sustainability, student activists often ask for more. On Thursday, the university announced that it would no longer purchase single-use plastic water bottles, another small step forward.

NYU’s water bottle purchasing ban will begin on Jan. 1, 2020, according to Assistant Vice President for Sustainability Cecil Scheib, who made the announcement at a University Senate meeting. Despite the ban, individuals will still be able to purchase single-use bottles in vending machines across the New York City campus.

In his 2016 inauguration speech, President Andrew Hamilton cited sustainability as one of the major initiatives NYU would tackle in his tenure.

“Together these enabled us to meet our public pledge to reduce our carbon emissions by 30 percent,” Hamilton said. “And to go on to confidently pledge to meet further reduction targets presented by New York City, New York State and the federal government.”

This initiative comes roughly eight months after the Board of Trustees struck down the University Senate resolution on fossil fuel divestment which would prevent NYU from investing in any company associated with fossil fuels. This commitment is one out of 35 initiatives that the Office of Sustainability released on their website today.

The announcement was met with applause from members of the University Senate, as Scheib explained that the move would eliminate 250,000 plastic water bottles from NYU’s yearly waste. Additionally, the university promised to make all Public Safety vehicles and shuttles electric in an effort to meet its 2025 and 2040 carbon reduction and neutrality goals.

“As NYU considers the best way to make the transition from fossil fuel to electric powered vehicles, it will work with its partners and vendors to identify eco-friendly ways of disposing of these vehicles as they reach the end of their life cycle,” Scheib wrote in an email to WSN.

Members of the Senate, including authors of the resolution for decarbonization, commended the university’s efforts to increase sustainability on campus. Senator-at-large for Sustainability Edin Thornton thanked Scheib for his commitment to sustainability.

“I wanted to thank Cecil and all of University Senate for raising this issue to the level that it deserves,” Thornton said. “To see commitments like this is incredibly heartening and I would encourage all members of University Senate to channel their passions into behaviors that promote sustainability.”

The promise to stop purchasing plastic water bottles does not apply to study away sites and other NYU campuses. At this time, this commitment only applies to the New York City campus.

During a short Q&A session, Keurig machines were brought up, as many offices in NYU have already begun to implement the Grounds to Grow On program, which composts and recycles K-Cups. Reducing the waste created by K-Cups is one step towards another potential ambitious goal of Scheib: zero waste.

“One of the things we are looking into is a zero-waste plan for the campus, just like there is a zero-carbon plan,” Scheib said.