Black History Through Comedy at the Symposium: Academic StandUp 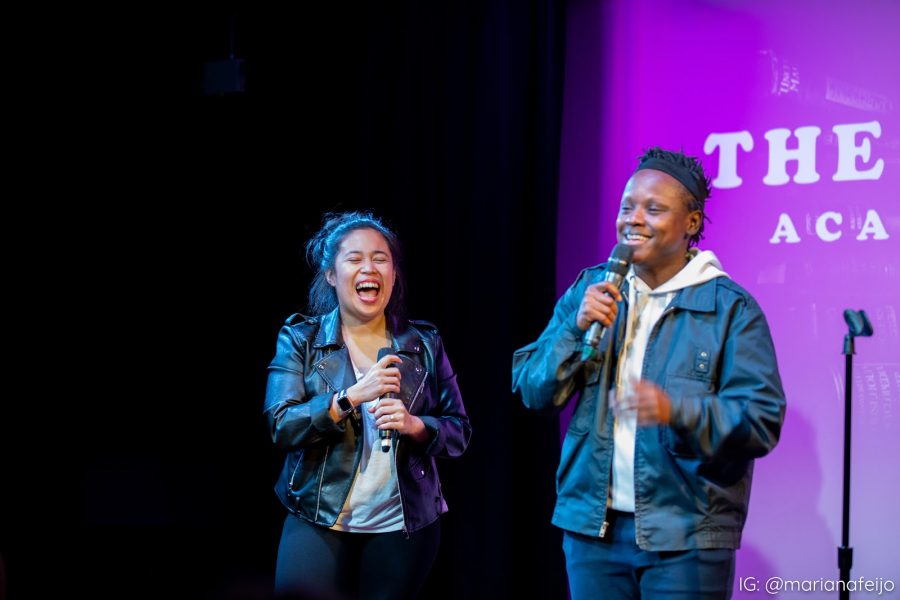 The Symposium: Academic Stand Up (Photos courtesy of Mariana Feijo)

The Symposium: Academic StandUp, a monthly stand-up series for research-inspired comedy, welcomed an audience of 116 people on Sunday at Caveat for its Black History Month special, Blackademia Takeover.

At the underground venue, tracks by pop singer Lizzo warmed up the crowd of what comedian Justin Williams described as “black nerds and their white allies.”

“The law school that I graduated from was called Washington and Lee, named after George Washington and Robert E. Lee, both slave owners,” she said. “Can I just say, I am sure I am not the person they had in mind when they were opening up an institution of higher education.”

“I love seeing other black geeks in costume, carefree, you know I think it is a gorgeous way to tell the ancestors, ‘Look you did it! We’ve got time on our hands now,’” one of them said in their set.

Each act received roars of laughter from the audience.

Kyle Marian, NYU alumnus and producer of The Symposium, recruits and teaches academics to translate their research and work life into comedy. Marian started The Symposium in Aug. 2017 with support from Story Collider’s Ben Lillie, who offered to have the stand-up showcased monthly at Caveat.

“I had a lot of pushback for combining science and academic subjects with stand-up comedy,” Marian said. “People either didn’t think it would sell, or academics and scientists thought stand-up comedy was problematic for their PR.”

The concept of Symposium was inspired by Bright Club U.K., a British academic comedy community Marian was involved with while at the University of Edinburgh, where she received her Master’s in Science Communication and Public Engagement.

“It was also a strategy for me to be able to translate my skills outside of academics because no one teaches you that stuff unless you’re in a vocational field,” Marian said.

The style of comedy at The Symposium borrows from Marian’s time in the U.K. and her background as a Queens native, combining the British comedic style of storytelling and the American comedic style of punch lines to relate scholars’ research to audiences in a way that was comprehensive and humorous.

“Most of what I do when I give talks is improvised and off the cuff, and I wanted to really practice the skill of doing something faster, smoother and finding the right word choice is super important, so stand-up comedy was a way to start practicing that,” McTier said.

Hargraves, a math lecturer at LaGuardia Community College, credits the lack of representation of queer people of color in stand-up as his reason for performing at Blackademia Takeover.

“There aren’t enough people talking about my experiences, so I’ve got to do it,” Hargraves said.

Previous themes of The Symposium’s shows include Nasty Women, Periods & Genitals, Secret Lives of PhDs and Persons with Disabilities. The interdisciplinary and intersectional nature of stand-up material showcased at the Blackademia Takeover flips the script on academic symposia.

“I’m in it to challenge how ‘experts’ should look and sound like,” Marian said.