Men’s Basketball Comes From Behind Against Case

Catch up on what happened this week in NYU Athletics. 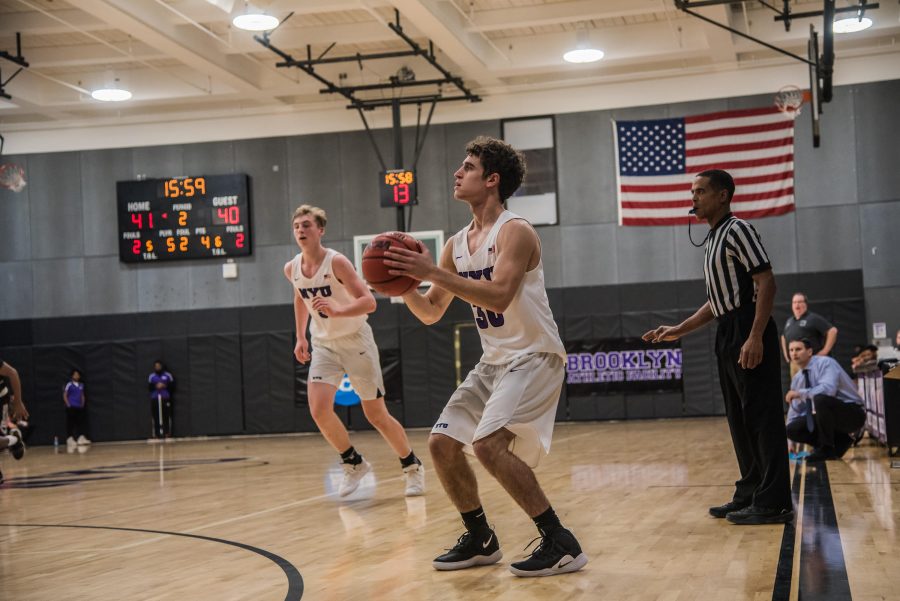 CAS first-year Alex Casieri sets up for a 3-pointer during a game in December. (Photo by Sam Klein)

Men’s Volleyball
The men’s volleyball team showed out this past week, playing and winning all three games to bump their winning streak up to four. The team started the streak off with a regular season win against Baruch College on Feb. 5, three sets to two. CAS junior captain Evan Lindley led the team with 17 kills, 10 digs and six service aces.

The men continued their strong play against Elmira College the next day, winning in straight sets again. Bikdeli led the team in assists once again with 21, to go along with four kills.

Going for their fifth straight win, the men will play Stevens Institute of Technology on Feb. 13.

On Feb. 10, the Violets defeated Carnegie Mellon University 61-52, improving their record to 9-2. CAS sophomore Lauren Koyama scored a career-high 26 points, coming off the bench to lead NYU to the win.

NYU will look to make it three in a row on Feb. 15 when it travels to Washington University in St. Louis.

Men’s Basketball
The men’s basketball team ground out a hard-fought win against Case Western Reserve University on Feb. 8, overcoming a 10-point first-half deficit to win the game by 10 with a final score of 81-71. After going down by 10 early, the Violets regained their footing as they tied up the game at 26-26 by the end of the first half. The game continued to be a back-and-forth battle until, with NYU up 64-63, CAS junior Dom Cristiano and CAS first-year Alex Casieri hit back-to-back shots to give the Violets breathing room en route to the win. Cristiano led NYU with 22 points and CAS sophomore Bobby Hawkinson posted his fourth double-double of the season with 14 points and 15 rebounds.

Track and Field
The men’s and women’s track and field teams competed at the David Hemery Valentine Invitational from Feb. 8 to 9 at Boston University. There was no team scoring since it featured student-athletes from all three NCAA divisions and many unattached competitors.

The highlight performer for the women’s team was CAS junior Evelyn Nkanga, who won her heat in the 400 meter, placing her 79th overall out of 172 runners.

The men had many great performances of their own. SPS senior Malcolm Montilus finished seventh overall in the 400 meter out of 192 runners, putting up a time of 48.02. His brother, SPS junior Julian Montilus, finished 52nd overall in the same event. NYU’s top finisher in the 800-meter was Stern senior Soham Kamat, who finished 118th overall out of a pool of 269. SPS first-year Matthew Edelman placed 21st overall in the long jump and CAS junior Carter Beardsley finished 17th overall in the shot put.

The Violets’ next meet is the Sam Howell Invitational, hosted by Princeton University, on Feb. 16.

Swimming and Diving
The men’s and women’s swimming and diving teams hosted the NYU Invitational on Feb. 8 to 9. Although there was no team scoring, the Violets still put on impressive performances throughout the invitational.

The Violets return to the pool on Feb. 13 for the UAA Championships, hosted by the University of Chicago.

Wrestling
An injury-riddled NYU wrestling team ended its regular season on Feb. 9 after competing in the UAA Championships. Only one of three regular starters were dressed for the competition, and the injuries proved to be more than the team could overcome as it lost the only two matches it competed in. NYU fell to the University of Chicago 36-3 and then to Case Western Reserve University 32-21.

Despite the losses, NYU’s bright spot came when CAS junior captain Evan Drill (141 pounds) won both of his bouts and was named Most Outstanding Wrestler of the event, becoming the eighth straight NYU representative to win the award at the UAA Championships. Drill was also named All-UAA for the second straight year.

A version of this article appeared in the Monday, Feb. 11, 2019, print edition. Email Zach Han at [email protected]